St. Jude Children’s Research Hospital leads study showing that a drug withdrawn from the market in 2010 may enhance the effectiveness of bone marrow transplants for select pediatric leukemia patients 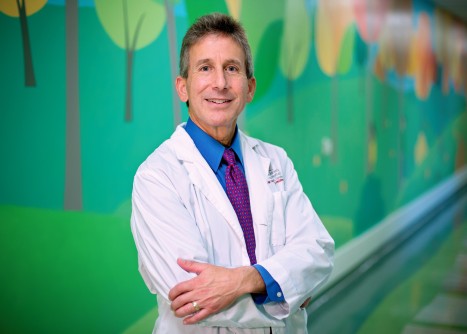 Jeffrey Rubnitz, M.D., Ph.D., of St. Jude Children’s Research Hospital, led a study that adds to evidence that some pediatric AML patients may benefit from drugs designed to kill cells that carry a particular protein on their surface.

St. Jude Children’s Research Hospital leads study showing that a drug withdrawn from the market in 2010 may enhance the effectiveness of bone marrow transplants for select pediatric leukemia patients

Newswise — (MEMPHIS, Tenn. – November 15, 2013) Combining the drug gemtuzumab ozogamicin (GO) with conventional chemotherapy may improve the outcome of bone marrow transplantation for some children battling high-risk acute myeloid leukemia (AML), according to a study led by St. Jude Children’s Research Hospital. The results appear in the current edition of the journal Cancer.

For young AML patients with suitable bone marrow donors, transplantation offers the best chance of a cure. Being free of even low levels of detectable cancer cells prior to transplantation is associated with better patient survival. This analysis found that combination therapy helped to eliminate minimal residual disease (MRD) in young AML patients who initially had a poor response to chemotherapy. By reducing MRD levels prior to transplantation, it is likely that GO contributed to the excellent outcome of these patients, researchers said.

The drug, trade named Mylotarg, received accelerated approval from the U.S. Food and Drug Administration in 2000 for treatment of AML in adults. The drug was voluntarily withdrawn in 2010 following questions about its safety and efficacy. Since then several studies conducted while the drug was authorized reported promising results in adults with AML. Those reports prompted this analysis of pediatric AML patients who received GO in a clinical trial conducted while the drug was available.

Researchers said the results add to evidence that both adults and children battling AML may benefit from treatments that use a similar mechanism as GO to combat AML. The drug was not associated with severe toxicity in this or other recent studies.

Unlike traditional chemotherapy that kills rapidly dividing cells, both malignant and healthy, GO was designed to kill more selectively. The drug works by targeting a protein carried on the surface of about 90 percent of AML cells. Work has begun on new strategies, including antibody-based therapies, that target the same AML surface protein, said the study’s senior author Jeffrey Rubnitz, M.D., Ph.D., a member of the St. Jude Department of Oncology.

AML is diagnosed in about 500 children annually and accounts for about 20 percent of childhood leukemia. The disease affects white blood cells.

“Currently there are few options for AML patients who relapse or do not respond to conventional therapy,” said first author Carol O’Hear, M.D., Ph.D., a St. Jude postdoctoral oncology fellow. Added Rubnitz: “Without new agents, it is unlikely we will be able to improve pediatric AML survival beyond current levels of about 70 percent. The results of this and earlier studies make a strong case that some patients benefit from this targeted therapy, which has us looking for new ways to take aim at the same protein.”

This study involved a subset of patients enrolled in a clinical trial of pediatric AML called AML02. Altogether, 232 children with AML enrolled in the six-year, multicenter trial that ended in 2008. A total of 46 patients received GO alone or in combination with conventional chemotherapy.

For this analysis, researchers wanted to know if GO was associated with reduced MRD. Patients were considered free of MRD if less than one cancer cell could be detected in 1,000 normal bone marrow cells.

Seventeen patients received GO alone when MRD was detected after two rounds of chemotherapy with the drugs cytarabine, daunorubicin and etoposide. After GO treatment, leukemia declined in 14 of the 17 patients and fell to undetectable levels in 13 patients.

An additional 29 patients received GO as part of their second round of three-drug chemotherapy. All had levels of residual disease that indicated a poor initial response to chemotherapy alone, including nine with MRD levels of 25 percent or more. Residual disease fell to undetectable levels in four of the nine patients following combination therapy.

Malignant cells fell to undetectable levels in 45 percent, or nine of the remaining 20 patients whose second round of treatment included GO plus chemotherapy. The patients all had MRD of between 1 and 25 percent after the first round of chemotherapy.

The overall five-year survival level of the 20 patients was 55 percent, compared to 36 percent for 22 patients with similar MRD who received chemotherapy alone. The survival difference between the two groups was not statistically significant, but investigators said the results point to a possible benefit of GO treatment for some pediatric AML patients whose cancer remained following chemotherapy. The 22 patients were treated early in AML02 before the protocol was revised to expand the use of GO. The revision followed evidence that the drug was well tolerated by the young AML patients.

The study was supported in part by a grant (CA02176530) from the National Cancer Institute at the National Institutes of Health and ALSAC.