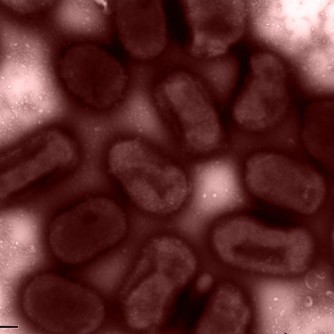 Infections with drug-resistant bacteria may be amenable to antibiotics after all. New research suggests that A. baumannii (above), a growing problem in healthcare settings, can naturally relinquish its ability to defy antibiotics.

Newswise — Infections with one of the most troublesome and least understood antibiotic-resistant “superbugs” are increasing at alarming rates, particularly in health-care settings.

But new research, published July 13 in The Proceedings of the National Academy of Sciences Online Early Edition, suggests it may be possible to rein in the spread of such infections without the need to develop new antibiotics, reports a team at Washington University School of Medicine​ in St. Louis.

Bacteria are natural competitors and have the capacity to kill off other bacteria. But to become bacterial assassins, the researchers found that multidrug-resistant Acinetobacter baumannii, a frequent cause of difficult-to-treat infections in hospitals, has to relinquish its ability to defy antibiotics.

“If we can identify ways to force the entire population of drug-resistant bacteria to undergo this change, we stand a better chance of fighting the growing problem of antibiotic resistance,” said first author Brent Weber, a graduate student. “Instead of looking for new antibiotics, we could restore bacteria’s vulnerability to antibiotics we already have.”

The researchers studied samples of A. baumannii isolated from a 2012 outbreak at a Canadian hospital. Four patients were infected, and one died.

“Many strains of this type of bacteria are resistant to antibiotics, can survive disinfectants and rapidly are becoming major health problems in hospitals worldwide,” said senior author Mario Feldman, PhD, associate professor of molecular microbiology.

The researchers expected the bacteria to readily kill other bacteria by producing and injecting a poison into their bacterial competitors. Killing the competitors should help A. baumannii infections spread widely and quickly.

But instead, the scientists found that the bacteria’s poison injection system was disabled in most of the samples from the Canadian outbreak. They identified chunks of bacterial DNA that were shutting down the system. These pieces of DNA, known as plasmids, also carried genes that enabled the bacteria to resist antibiotics.

In addition, the scientists found that part of the bacterial population regularly deactivated the plasmids, which turned on the poison injection system and transformed the bacteria into killers. But doing so meant the bacteria also turned off the antibiotic-resistance genes, making the bacteria vulnerable to antibiotics.

Additional studies of A. baumannii samples from other outbreaks worldwide found the same trade-off: the bacteria’s ability to kill competitors could be activated but doing so left them at the mercy of antibiotics.

“This appears to be a common strategy for these bacteria in different parts of the world, and further study could help us understand how bacteria evolve into superbugs that are resistant to many forms of treatment,” Feldman said. “This knowledge could lead to more effective treatments and better strategies for preventing the development of superbugs.”

###This research was supported by the National Sciences and Engineering Research Council (NSERC) of Canada.