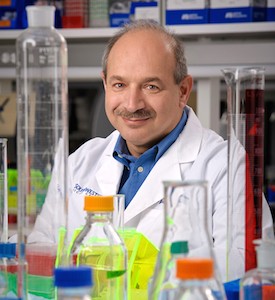 Newswise — DALLAS – Feb. 1, 2016 – A new drug with the potential to aid in vaccine development has been identified by researchers at UT Southwestern Medical Center. “The drug we made appears safe, and boosts immunity in mice. Therefore, the drug, which is straightforward to synthesize and to couple to antigens that induce an immune response, may prove useful in the generation of vaccines,” said Dr. Bruce Beutler, Director of UT Southwestern’s Center for the Genetics of Host Defense.The study, published today in Proceedings of the National Academy of Sciences, builds on work that earned Dr. Beutler a share of the 2011 Nobel Prize in Physiology or Medicine for his use of classic genetics approaches to identify the mammalian LPS (lipopolysaccharide) receptor TLR4, which engages LPS particles on Gram-negative bacteria and initiates an immune response. In so doing, Dr. Beutler demonstrated that the mammalian Toll-like receptors (TLRs) sense microbial infections and launch the body’s immune response. “This is the first drug that is designed to activate the TLR4/MD-2 complex, which normally senses bacterial LPS. The results show that the drug elicits the same shape change in TLR4/MD-2 as LPS does, but achieves this change by binding to different contact points on the surface of the protein,” Dr. Beutler said.The researchers screened about 90,000 compounds for their ability to activate production of tumor necrosis factor alpha (TNFα), a cell signaling protein involved in inflammation. Two compounds with immune-cell stimulating activity were identified, the strongest of which was named Neoseptin-1. Through chemical modifications, the researchers created the more potent Neoseptin-3.Dr. Beutler noted that the study was a multidisciplinary collaboration between his genetics laboratory; the structural biology laboratory of Dr. Hong Zhang, Associate Professor of Biochemistry and Biophysics at UT Southwestern; and chemistry and genetics laboratories at The Scripps Research Institute, where Dr. Beutler worked prior to returning to UT Southwestern. “By studying how the drug becomes attached to the TLR4 receptor using X-ray crystallography, we were able to determine that unlike any other drug target interactions studied, this one involves two drug molecules binding to each other noncovalently (without a chemical bond between the two molecules’ electrons) at the active site of the target protein,” he said.In mouse cell studies, Neoseptin-3 touched off an immune response similar to that caused by LPS. But it did so by having contact with different amino acids in the TLR4 and MD-2 proteins. In addition to being a chemically very different molecule from LPS, Neoseptin-3 also generated a milder immune response, he said. In contrast, LPS induces a strong response that can be toxic.Study co-lead authors were postdoctoral researchers Dr. Ying Wang, in the Center for the Genetics of Host Defense, and Dr. Lijing Su, in Biochemistry. Other Center researchers contributing to the work were postdoctoral researchers Dr. Hexin Shi and Dr. Jin Huk Choi; graduate student Kuan-wen Wang; contract scientific writer Dr. Eva Marie Moresco, and Dr. Xiaoming Zhan, Assistant Professor of Physiology. The medicinal chemistry team from Scripps included Department of Chemistry Chairman Dr. Dale Boger, Dr. Matthew Morin, Dr. Brian Jones, Dr. Landon Whitby, and Dr. Murali Surakattula.Dr. Beutler completed his medical training at UT Southwestern and was one of the University’s first Howard Hughes Medical Institute Investigators. In addition to directing the Center, Dr. Beutler is a Professor of Immunology, UT Regental Professor, and holder of the Raymond and Ellen Willie Distinguished Chair in Cancer Research, in Honor of Laverne and Raymond Willie, Sr.The work was supported by grants from the National Institutes of Health’s National Institute of General Medical Sciences (NIGMS) and National Institute of Allergy and Infectious Diseases (NIAID). Some of the research was conducted at the Structural Biology Center at Argonne National Laboratory, which is run by the University of Chicago for the U.S. Department of Energy.

About UT Southwestern Medical CenterUT Southwestern, one of the premier academic medical centers in the nation, integrates pioneering biomedical research with exceptional clinical care and education. The institution’s faculty has included six who have been awarded Nobel Prizes since 1985. The faculty of almost 2,800 is responsible for groundbreaking medical advances and is committed to translating science-driven research quickly to new clinical treatments. UT Southwestern physicians provide medical care in about 80 specialties to more than 92,000 hospitalized patients and oversee approximately 2.2 million outpatient visits a year.