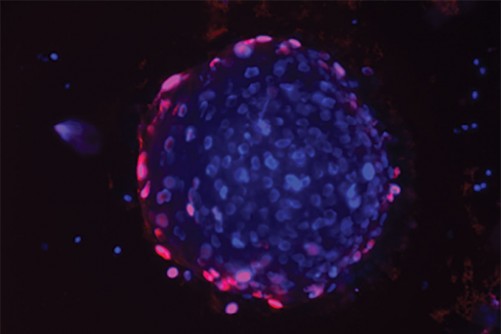 Newswise — A single drug compound simultaneously attacks hard-to-treat prostate cancer on several fronts, according to a new study in mice and human cells. It triggers immune cells to attack, helps the immune cells penetrate the tumor, and cuts off the tumor’s ability to burn testosterone as fuel, according to new research from Washington University School of Medicine in St. Louis. The drug may offer a promising new strategy for treating patients whose tumors don’t respond to standard therapy.

The study appears online in the journal Nature Communications.

Prostate cancer is notorious for eventually developing resistance to standard treatments that block or reduce testosterone, which fuels growth of these tumors. And like many solid tumors, prostate cancer also has proven stubbornly resistant to newer immunotherapies, which are intended to take the brakes off the immune system’s T cells to get them fighting cancerous invaders. Immunotherapies — most commonly, immune checkpoint inhibitors — can be extremely effective but only in certain cancers, such as melanoma.

“We need to develop better therapies for prostate cancer patients, because most of these tumors develop resistance to hormone-based therapies doctors rely on to treat these cancers,” said senior author Nupam P. Mahajan, PhD, a professor of surgery. “Immunotherapy is the newest and most promising type of therapeutic for cancer right now, but even so, immune checkpoint inhibitors have failed to do much against most solid tumors, including prostate cancer. This study was surprising because we found that this drug activates anti-cancer T cells in a novel way, and it also increases the T cells’ ability to penetrate the tumor. This could lead to a more effective strategy for patients whose cancers are hard to treat.”

The drug, called (R)-9b, is a small molecule that blocks an oncogene, a gene that drives cancer. The researchers initially attributed the drug’s success in mouse studies to its ability to reduce or eliminate androgen receptors in the prostate cancer cells. These receptors bind to testosterone and use the hormone to fuel tumor growth. The drug’s ability to eliminate the androgen receptor differs from standard drugs that reduce the amount of testosterone in the body, and other drugs that block the androgen receptor’s function as a transcription regulator.

But because the new drug was so effective, Mahajan and his colleagues suspected something more was going on. The drug blocks a gene called ACK1. The researchers developed a strain of mice that totally lacked this gene in order to study what happens when it’s missing. At first, the researchers were baffled by these mice. Mice missing an entire gene often have obvious problems. But these mice seemed fine. And when the researchers looked for tumor growth, they found very little. It was difficult to model cancer in these animals.

“In most of these mice, when we introduced cancer cells as we typically do, there was no trace of a tumor,” said Mahajan, also a research member of Siteman Cancer Center at Barnes-Jewish Hospital and Washington University School of Medicine. “In the few that did develop tumors, the tumors were small compared to those of wild-type mice. This was the first clue that something important was happening in mice missing this gene. We found that they were able to mount a robust immune response against the cancer cells.”

When different mice — mice with this gene — were implanted with human prostate tumors and given the drug that blocks this gene, it had the same effect: taking the brakes off the immune system and producing increased levels of certain types of T cells known to attack cancer. The drug also increased signaling molecules that allow the T cells to penetrate the tumor and kill cancer cells more effectively. The tumors in these (R)-9b treated mice were much smaller than those of mice in control groups.

Given the drug’s success in tumor penetration, the researchers investigated whether adding immune checkpoint inhibitors to treatment with the drug would be even more effective, taking the brakes off T cells in more than one way at the same time — but there was no such improvement.

“Surprisingly, we found that the immune checkpoint inhibitor is activating ACK1, the very pathway we are shutting down with this drug compound,” Mahajan said. “It’s possible immune checkpoint inhibitors don’t work well in these tumors because they are turning on ACK1, which suppresses the immune response. Similar to prostate cancer, the ACK1 pathway activation also could be employed by other cancers that do not respond to checkpoint inhibitors. However, these cancers could respond to (R)-9b, so we would like to investigate this drug in other solid tumors as well.”

Mahajan said the drug spurs multiple responses because of the nature of the gene it blocks. Many genes have several roles in the body, and ACK1’s roles in expression of the androgen receptor and in reigning in the immune system make it an appealing target for cancer therapy, especially against solid tumors with a hormonal growth component, such as prostate and breast cancers.

Mahajan and his team are gathering data to apply for permission from the Food and Drug Administration to test the drug in a clinical trial for patients with prostate cancer.

Mahajan and co-author Kiran Mahajan, PhD, an assistant professor of surgery, are inventors of two patents related to this work. Both patents are licensed to TechnoGenesys Inc., which they co-founded. They also own stock and serve as consultants for the company.

About Washington University School of Medicine

WashU Medicine is a global leader in academic medicine, including biomedical research, patient care and educational programs with 2,700 faculty. Its National Institutes of Health (NIH) research funding portfolio is the fourth largest among U.S. medical schools, has grown 54% in the last five years, and, together with institutional investment, WashU Medicine commits well over $1 billion annually to basic and clinical research innovation and training. Its faculty practice is consistently within the top five in the country, with more than 1,790 faculty physicians practicing at over 60 locations and who are also the medical staffs of Barnes-Jewish and St. Louis Children’s hospitals of BJC HealthCare. WashU Medicine has a storied history in MD/PhD training, recently dedicated $100 million to scholarships and curriculum renewal for its medical students, and is home to top-notch training programs in every medical subspecialty as well as physical therapy, occupational therapy, and audiology and communications sciences.