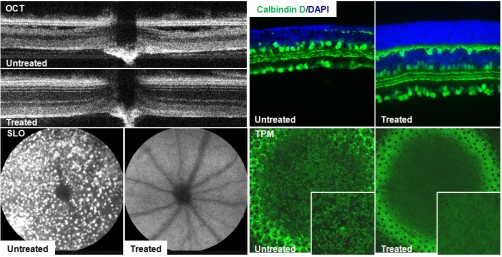 Four imaging techniques show significantly more retinal damage following light exposure in the eyes of untreated versus treated mice. Thinning of the layers of the retina is shown in top images. Autofluorescent spots (shown bottom left), indicating light damage, are plentiful in untreated animals and absent in treated ones. Two-photon microscopy (bottom right) shows enlargement of the photoreceptors in untreated mice compared with treated ones.

Newswise — Combinations of Food and Drug Administration-approved drugs protect against the loss of cells required for vision in a mouse model of blinding retinal diseases. The study, published in Science Signaling, was funded by the National Eye Institute, a part of the National Institutes of Health.

The drugs, which are currently used for a range of conditions, from lowering blood pressure to treating prostate disease, may eventually offer an option for preventing vision loss associated with the degeneration of cells in the retina, the light-sensitive tissue at the back of the eye. The loss of retinal function causes blindness in diseases such as age-related macular degeneration and Stargardt disease, the most common form of inherited juvenile macular degeneration. If the therapy’s success is replicated in humans, it would represent an entirely novel approach to preventing visual impairment, said the study’s principal investigator, Krzysztof Palczewski, Ph.D., chair of the Department of Pharmacology at Case Western Reserve University.

The researchers selected the drugs because they act on G protein coupled receptors (GPCRs), a family of signaling proteins in various cell types throughout the body. When working properly, such signaling keeps the cell in homeostasis, a state of balance with multiple biological processes buzzing along in sync.

The researchers studied wildtype and transgenic mice that were bred to have retinas especially susceptible to light-induced degeneration of their photoreceptors, the key cells in the retina that detect light and convert it into a signal for vision. Both types of mice were exposed to a bright light long enough to lead to significant losses of photoreceptors as well as other types of cells in the retina and a thinning of a retinal layer.

In previous studies, Palczewski and his team had found that when mice develop light-induced retinopathy, it could hinder the activity of GPCRs. So they asked, “What if we expose the mice to compounds that activate GPCRs?” They identified more than a dozen drugs with a particular affinity for GPCRs in the retina and that also appeared to be significantly protective against light-induced photoreceptor degeneration.

In the current study, the researchers zeroed in on two combinations of these drugs that each individually take different pathways to the same target: optimizing the activity of GPCRs. Wildtype and transgenic mice that were dosed with the drug combinations prior to light exposure were more likely to preserve their retinal layer and photoreceptor cells compared to those that were not given the prophylactic therapy prior to light exposure.

The investigators then sought to examine the impact of the drug regimens at the molecular level by performing transcriptome analysis. That is, they looked at patterns of gene expression in the retinas of light-exposed and unexposed mice and they found some key differences. “Light-induced injury to the cells of the retina can trigger the upregulation or downregulation of over 100 genes as the cells attempt to respond to the damage. Studying these gene expression patterns is a far more sensitive marker of retinal degeneration than looking at structural changes to the cells under a microscope,” said the study’s co-investigator, Anand Swaroop, Ph.D., chief of NEI’s Neurobiology-Neurodegeneration and Repair Laboratory.

The combinations of drugs used in the study work synergistically to achieve what’s called systems pharmacology, a relatively new concept, Palczewski explained. Traditionally, patients are often treated by means of poly-pharmacology, multiple drugs that act on different targets, which means that each drug needs to be dosed at high enough levels to achieve a response at their respective targets. While effective, such doses of several drugs over time can lead to side effects.

By contrast, systems pharmacology homes in on a single target – in this case, GPCR function. Multiple drugs acting via multiple biological pathways all affect a single target. Working synergistically on the same target requires much lower doses of each drug to be effective, which avoids the risk of inducing drug-related side effects. “Interestingly, the combined lower doses of two drug treatments were able to reverse the gene expression changes induced by light-induced injury, and one of the combinations did not seem to induce the expression of undesirable genes,” Swaroop said.

“It’s reassuring that the drugs used in the study are already being used in clinical practice, so we know their safety profile,” Palczewski said. Future studies will need to be conducted to ensure that there is no additional risk of toxicity when the low doses of the agents are used together.

“Discovering new uses for drugs that are approved by the FDA provides the quickest possible transition from bench to bedside,” said Neeraj Agarwal, Ph.D., who manages the NEI’s translational research program. “These studies are remarkable as they offer a systems pharmacologic approach for treating retinopathies.”