Drunk or Stoned: Comparing Sexual Experiences Related to Alcohol and Marijuana Use Among Adults

NYU researchers asked participants about their behaviors before, during, and after sex while under the influence of marijuana and alcohol 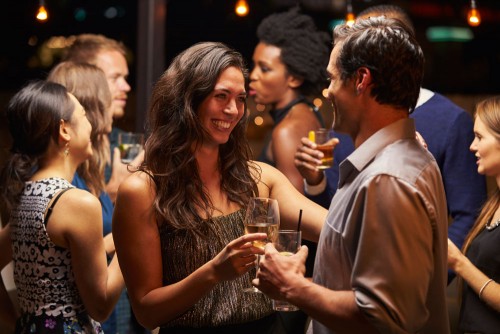 Newswise — A new study, published in Archives of Sexual Behavior by researchers affiliated with New York University's Center for Drug Use and HIV Research (CDUHR), compared self-reported sexual experiences related to use of alcohol and marijuana. Since marijuana has increased in popularity in the U.S., the researchers examined if and how marijuana use may influence risk for unsafe sexual behavior. “With marijuana becoming more accepted in the U.S. along with more liberal state-level policies,” notes Joseph J. Palamar, PhD, MPH, an affiliate of CDUHR and an assistant professor of Population Health at NYU Langone Medical Center (NYULMC), “it is important to examine users’ sexual experiences and sexual risk behavior associated with use to inform prevention and harm reduction.”

In this study, the researchers interviewed 24 adults (12 males and 12 females, all self-identified as heterosexual and HIV-negative) who recently used marijuana before sex. Compared to marijuana, alcohol use was more commonly associated with social outgoingness and use often facilitated connections with potential sexual partners; however, alcohol was more likely than marijuana to lead to atypical partner choice or post-sex regret.

Alcohol was commonly used as a social lubricant to meet sexual partners, and this was related, in part, to alcohol being readily available in social gatherings.

“Interestingly, some users reported that the illegality of marijuana actually facilitated sexual interactions,” notes Dr. Palamar. “Since smoking marijuana recreationally is illegal in most states and smoking it tends to produce a strong odor, it usually has to be used in a private setting. Some individuals utilize such private or intimate situations to facilitate sexual encounters”.

While users often described favorable sexual effects of each drug, both alcohol and marijuana were reportedly associated with a variety of negative sexual effects including sexual dysfunction. For example, marijuana use was linked to vaginal dryness and alcohol was commonly described as increasing the likelihood of impotence among males.

The researchers noted that the sexual effects tended to be similar across males and females, and both alcohol and marijuana were generally associated with loss of inhibitions. Both drugs appear to be potentially associated with increased feelings of self-attractiveness, but possibly more so for alcohol, and participants reported feelings of increased sociability and boldness while consuming alcohol.

When smoking marijuana, participants tended to reported increased feelings of anxiety or a sense of wariness in unfamiliar situations that they did not generally seem to experience after using alcohol. Therefore, these drugs appear to have different effects with regard to socialization that may precede a sexual encounter.

“Sexual encounters on marijuana tended to be with someone the individual knew,” comments Dr. Palamar. “Sex on alcohol was often with a stranger so the situation before sex may be much more important than the drug used.”

Marijuana and alcohol are associated with unique sexual effects, with alcohol use reportedly leading to riskier sexual behavior. Both drugs appear to potentially increase risk for unsafe sex.

“Research is needed continue to study sexual effects of recreational drugs to inform prevention to ensure that users and potential users of these drugs are aware of sexual effects associated with use,” emphasizes Dr. Palamar. “Our results can inform prevention and harm reduction education especially with regard to marijuana, since people who smoke marijuana generally don’t receive any harm reduction information at all. They’re pretty much just told not to use it.”

Acknowledgements: This study was funded by the Center for Drug Use and HIV Research (CDUHR) via the National Institute on Drug Abuse (NIDA) (P30DA011041). The first author was also supported by NIDA (K01 DA038800).

About CDUHRThe mission of the Center for Drug Use and HIV Research (CDUHR) is to end the HIV and HCV epidemics in drug using populations and their communities by conducting transdisciplinary research and disseminating its findings to inform programmatic, policy, and grass roots initiatives at the local, state, national and global levels. CDUHR is a Core Center of Excellence funded by the National Institute on Drug Abuse (Grant #P30 DA011041). It is the first center for the socio-behavioral study of substance use and HIV in the United States and is located at the New York University College of Nursing. For more information, visit www.cduhr.org.About NYU Langone Medical CenterNYU Langone Medical Center, a world-class, patient-centered, integrated academic medical center, is one of the nation’s premier centers for excellence in clinical care, biomedical research, and medical education. Located in the heart of Manhattan, NYU Langone is composed of four hospitals—Tisch Hospital, its flagship acute care facility; Rusk Rehabilitation; the Hospital for Joint Diseases, the Medical Center’s dedicated inpatient orthopaedic hospital; and Hassenfeld Children’s Hospital, a comprehensive pediatric hospital supporting a full array of children’s health services across the Medical Center—plus the NYU School of Medicine, which since 1841 has trained thousands of physicians and scientists who have helped to shape the course of medical history. The Medical Center’s tri-fold mission to serve, teach, and discover is achieved 365 days a year through the seamless integration of a culture devoted to excellence in patient care, education, and research. For more information, go to www.NYULMC.orgAbout the NYU Rory Meyers College of NursingNYU Rory Meyers College of Nursing is a global leader in nursing education, research, and practice. It offers a Bachelor of Science with a major in Nursing, a Master of Science and Post-Master’s Certificate Programs, a Doctor of Nursing Practice degree and a Doctor of Philosophy in nursing research and theory development.