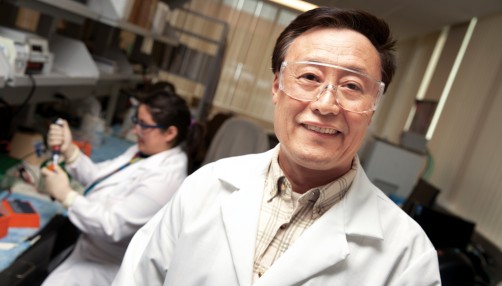 Newswise — An international team led by researchers at UC Davis has shown that the cyclin B1/Cdk1 protein complex, which plays a key role in cell division, also boosts the mitochondrial activity to power that process. This is the first time the complex has been shown to perform both jobs. This newfound ability could make cyclin B1/Cdk1 an excellent target to control cellular energy production, potentially advancing cancer care and regenerative medicine. The research was published online today in the journal Developmental Cell.

“These proteins not only control the cell cycle, but they also moonlight to increase mitochondrial energy,” said lead author Jian Jian Li, director of Translational Research at the UC Davis Comprehensive Cancer Center and professor in the Department of Radiation Oncology. “They synchronize these processes because the cell cycle cannot proceed without the extra energy.”

The cyclin B1/Cdk1 complex has long been known to intervene at a critical point in the cell cycle, the G2 phase, during which cell division pauses after DNA replication to check for genetic damage. Once any damage has been repaired, the cell can move into mitosis (M) and begin dividing.

However, in addition to moving the cell cycle into mitosis, cyclin B1/Cdk1 also travels outside the nucleus to mitochondria – the cell’s power plants – to boost energy production when the cell needs it most. Specifically, cyclin B1/Cdk1 phosphorylates (transfers energy to) a group of mitochondrial proteins (called complex I), increasing the organelles’ ability to produce ATP, which powers most cellular activities. This coordination ensures the cell has enough energy to divide.

This is the first evidence that cyclin B1/Cdk1both senses the cell’s energy needs during the G2/M transition and communicates that information to mitochondria. This mechanism could be an appealing therapeutic target for cancer.

“Under stress from radiation or chemotherapy, tumor cells may need mitochondria to provide extra energy to repair DNA damage,” said Li. “If we block this communication between nucleus and mitochondria in tumor cells and inhibit glycolysis (directly converting glucose into cellular energy, the major cellular fuel for cancer cells), this could be a new approach to treating cancer.”

In addition to making radiation and chemotherapy more effective, modulating cellular energy could potentially be used to control tumor growth.

“Like cars, tumors need a lot of gas,” said Li. “If we reduce the amount of gas, we could perhaps slow down the cancer.”

Ironically, this newly discovered cellular mechanism could also boost communication between scientists, as this research unites two disciplines that had previously been separate: cell cycle and mitochondrial studies.

“A lot of people are working in mitochondria, and many more study the cell cycle, but few are studying the relationship between them,” said Li. “In this paper, we show cross-talk between the nucleus and mitochondria. Now, perhaps, we can get similar cross-talk among experts between these two areas of study.”

This research was supported by NIH CA133402 and CA152313, DOE Office of Science DESC0001271 and NIH Intramural Research Program of NIDDK.