Earlier, More Frequent Removal of Some Pancreatic Cysts May Decrease Cancer Risk for Some Patients 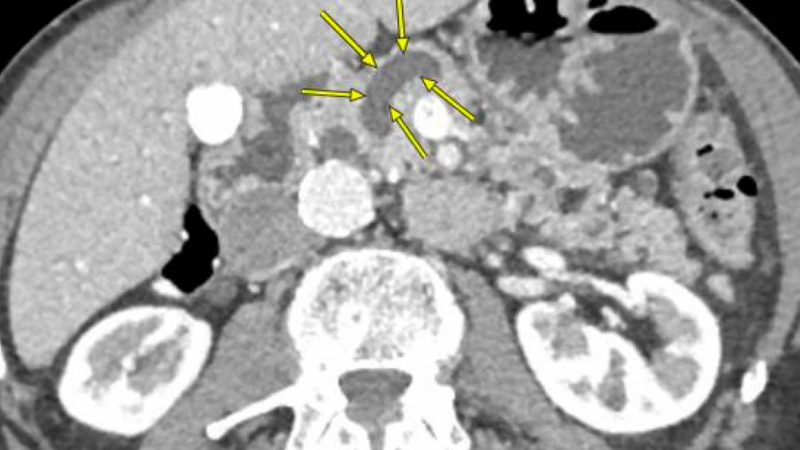 CT scan of a pancreas that shows enlarged pancreatic duct

Newswise — By analyzing medical records of 901 adults who had surgery for a certain type of precancerous pancreatic cyst, researchers at Johns Hopkins Medicine and The Karolinska Institute in Sweden have updated parameters for an anatomical “marker” that can tell more precisely if these cysts are likely to develop into lethal pancreatic cancers.

The findings, they say, are not yet proof of the concept, but do strongly suggest that removing so-called intraductal papillary mucinous neoplasms as soon as the main pancreatic duct is enlarged beyond 5 millimeters in diameter has the potential to prevent these precancers before they become malignant.

The pancreas is shaped vaguely like a revolver, with a duct --normally about 3 millimeters in diameter -- that runs all the way down the barrel of the gun and carries digestive enzymes. When inflamed or populated by cysts or other growths, the duct enlarges.

The vast majority of pancreatic cysts, including intraductal papillary mucinous neoplasms, are benign and cause no symptoms, the researchers note. In fact, most are diagnosed “incidentally” during MRIs or CT scans for non-pancreas-related conditions. But some can cause significant inflammation and damage to the duct that runs the length of the pancreas — a process that dilates, or enlarges, the duct — and are more likely precancerous or even cancerous.

Pancreatic cancer is the third leading cause of cancer deaths, affecting more than 55,000 Americans each year. The disease is difficult to diagnose and treat, and five-year survival rates after diagnosis are around 9%, according to the U.S. National Cancer Institute. As a result, efforts to identify early markers of the disease -- biological or structural -- are a priority for pancreatic disease specialists.

Guidelines set in 2012 by the International Cancer of the Pancreas Screening Consortium call for surgical removal of these cysts when there are one or more and when dilation of the duct is at or greater than 10 millimeters. But the new Johns Hopkins study findings are in support of the more recent European guidelines published in 2018, which encourage surgical removal when dilation is in a range much smaller than that.

Specifically, the researchers report in the Annals of Surgery published online this past winter, their analysis offers indirect evidence that for people who can safely undergo surgery, the best option for preventing cancer is to remove cysts when the duct is anywhere over 5 millimeters because many of those removed cysts had precancerous cells or cancer tissue.

“If we continue using the more conservative cutoff point of 10 millimeters dilation for deciding when to remove these cysts, this study suggests we will miss a lot of people who will go on to develop cancer,” says Ross Beckman, M.D., a resident and postdoctoral fellow in the Department of Surgery at the Johns Hopkins University School of Medicine and one of the lead authors on the paper. “Changing to more aggressive guidelines will lead to more surgeries, but would likely save more lives.”

For their study, the researchers collected data from the medical records of 901 patients who underwent some form of pancreas-related surgery at The Johns Hopkins Hospital between 2004 and 2017 and the Karolinska University Hospital in Sweden from 2008 to 2017. Both hospitals have the highest volume of such operations for the U.S. and Europe, respectively.

Overall, the patients’ average age was 69 years, and 52% were women.

Then, the researchers gathered information on the widths of each pancreatic duct in the 901 patients using CT scans and MRIs taken for any reason within 30 days prior to the patients’ surgeries.

The researchers caution that their study was designed to show associations between dilation levels and the likelihood of having or developing precancer or cancer. Their findings, they emphasize, don’t prove that removing pancreatic cysts before they dilate ducts beyond 5 millimeters will in fact prevent cancer.

But they said the findings give supporting evidence that it may be time to update the guidelines to call for surgery when dilation is in a range of 5–7 millimeters.

The researchers can’t really say for sure how many people will be saved from cancer to any certain degree as their study wasn’t designed to determine this.

“By 2025, experts predict that pancreatic cancer will be the second leading cause of cancer death in the U.S.,” says Beckman. “Since pancreatic cancer is so aggressive, survival rates remain low despite improvements in medical and surgical treatment. But one place where we may really be able to make significant improvements is in early detection and prevention — that is, removing these precancerous growths before they progress to cancer.”

If someone has a pancreatic duct dilated less than 5 millimeters, the researchers say the risk of cancer is relatively low and the risks of surgery likely outweigh the risk of cancer. In these situations, they would recommend watchful waiting with yearly surveillance with an MRI or CT scan.

The researchers don’t have any conflicts to report.