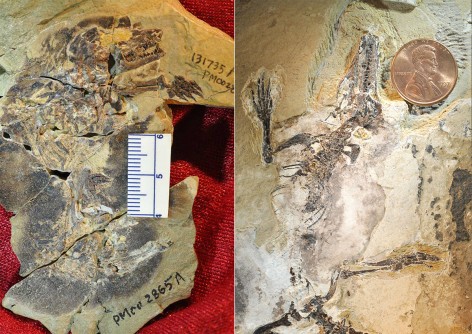 Photos of the fossils of Docofossor (left) and Agilodocodon (right) 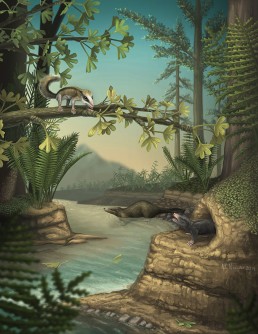 Newswise — The fossils of two interrelated ancestral mammals, newly discovered in China, suggest that the wide-ranging ecological diversity of modern mammals had a precedent more than 160 million years ago.

With claws for climbing and teeth adapted for a tree sap diet, Agilodocodon scansorius is the earliest-known tree-dwelling mammaliaform (long-extinct relatives of modern mammals). The other fossil, Docofossor brachydactylus, is the earliest-known subterranean mammaliaform, possessing multiple adaptations similar to African golden moles such as shovel-like paws. Docofossor also has distinct skeletal features that resemble patterns shaped by genes identified in living mammals, suggesting these genetic mechanisms operated long before the rise of modern mammals.

These discoveries are reported by international teams of scientists from the University of Chicago and Beijing Museum of Natural History in two separate papers published Feb. 13 in Science.

“We consistently find with every new fossil that the earliest mammals were just as diverse in both feeding and locomotor adaptations as modern mammals,” said Zhe-Xi Luo, PhD, professor of organismal biology and anatomy at the University of Chicago and an author on both papers. “The groundwork for mammalian success today appears to have been laid long ago.”

Agilodocodon and Docofossor provide strong evidence that arboreal and subterranean lifestyles evolved early in mammalian evolution, convergent to those of true mammals. These two shrew-sized creatures – members of the mammaliaform order Docodonta – have unique adaptations tailored for their respective ecological habitats.

“The finger and limb bone dimensions of Agilodocodon match up with those of modern tree-dwellers, and its incisors are evidence it fed on plant sap,” said study co-author David Grossnickle, graduate student at the University of Chicago. “It’s amazing that these arboreal adaptions occurred so early in the history of mammals and shows that at least some extinct mammalian relatives exploited evolutionarily significant herbivorous niches, long before true mammals.”

Docofossor, which lived around 160 million years ago, had a skeletal structure and body proportions strikingly similar to the modern day African golden mole. It had shovel-like fingers for digging, short and wide upper molars typical of mammals that forage underground, and a sprawling posture indicative of subterranean movement.

Docofossor had reduced bone segments in its fingers, leading to shortened but wide digits. African golden moles possess almost the exact same adaptation, which provides an evolutionary advantage for digging mammals. This characteristic is due to the fusion of bone joints during development – a process influenced by the genes BMP and GDF-5. Because of the many anatomical similarities, the researchers hypothesize that this genetic mechanism may have played a comparable role in early mammal evolution, as in the case of Docofossor.

The spines and ribs of both Agilodocodon and Docofossor also show evidence for the influence of genes seen in modern mammals. Agilodocodon has a sharp boundary between the thoracic ribcage to lumbar vertebrae that have no ribs. However, Docofossor shows a gradual thoracic to lumber transition. These shifting patterns of thoracic-lumbar transition have been seen in modern mammals and are known to be regulated by the genes Hox 9-10 and Myf 5-6. That these ancient mammaliaforms had similar developmental patterns is an evidence that these gene networks could have functioned in a similar way long before true mammals evolved.

“We believe the shortened digits of Docofossor, which is a dead ringer for modern golden moles, could very well have been caused by BMP and GDF,” Luo said. “We can now provide fossil evidence that gene patterning that causes variation in modern mammalian skeletal development also operated in basal mammals all the way back in the Jurassic.”

Early mammals were once thought to have limited ecological opportunities to diversify during the dinosaur-dominated Mesozoic era. However, Agilodocodon, Docofossor and numerous other fossils – including Castorocauda, a swimming, fish-eating mammaliaform described by Luo and colleagues in 2006 – provide strong evidence that ancestral mammals adapted to wide-ranging environments despite competition from dinosaurs.

“We know that modern mammals are spectacularly diverse, but it was unknown whether early mammals managed to diversify in the same way,” Luo said. “These new fossils help demonstrate that early mammals did indeed have a wide range of ecological diversity. It appears dinosaurs did not dominate the Mesozoic landscape as much as previously thought.”

The study, “Evolutionary development in basal mammaliaforms as revealed by a docodontan,” was supported by the Beijing Science and Technology Commission, the Ministry of Science and Technology of China and the University of Chicago. Additional authors include Qing-Jin Meng, Qiang Ji, Di Liu, Yu-Guang Zhang and April I. Neander.

The study “An arboreal docodont from the Jurassic and mammaliaform ecological diversification,” was supported by the Beijing Science and Technology Commission, the Ministry of Science and Technology of China, the Chinese Academy of Geological Science and the University of Chicago. Additional authors include Qing-Jin Meng, Qiang Ji,Yu-Guang Zhang and Di Liu. 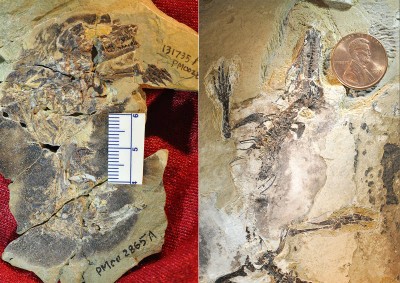 Caption: Photos of the fossils of Docofossor (left) and Agilodocodon (right) 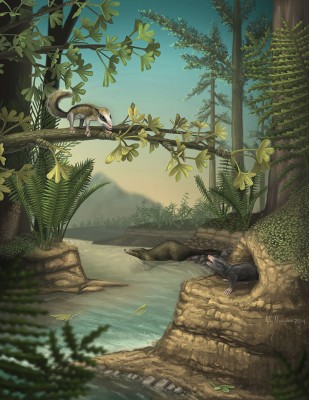