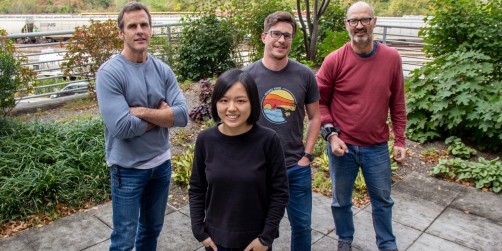 New research published in in Nature Communications, led by Read Montague (left) of the Virginia Tech Carilion Research Institute, suggests that participants who received educational interventions in early childhood show positive effects on social decision-making more than four decades later. Yi Luo (second from left), is the first author of the research study and a postdoctoral associate at the VTCRI. Sébastien Hétu (third from left), is the co-first author who is now is now an assistant professor at the University of Montreal. Terry Lohrenz is a VTCRI research assistant professor and member of the VTCRI Human Neuroimaging Laboratory and Computational Psychiatry Unit.

Newswise — Adults who had received early life, intensive childhood educational intervention display high levels of fairness in social interactions more than 40 years later, even when being fair comes at a high personal cost, according to a new study by Virginia Tech Carilion Research Institute scientists.

In today’s (11 a.m. Tuesday, Nov. 20) Nature Communications, researchers describe how they asked 78 participants from the Abecedarian Project, one of the longest running randomized controlled studies of the effects of early childhood education in low-income families, to participate in economic games measuring social norm enforcement and future planning during social decision-making. An additional 252 participants who did not receive any childhood intervention were recruited to serve as a control group.

The Abecedarian Project is a scientific study originally developed and led by Craig Ramey, formerly of the University of North Carolina at Chapel Hill and now a professor and distinguished research scholar at the Virginia Tech Carilion Research Institute and a professor in the Virginia Tech Department of Psychology in the College of Science. The Abecedarian researchers investigated whether an intensive early childhood educational intervention could produce significant benefits in language and learning in disadvantaged children.

Participants were invited to take part in an economic game to split $20. One player decides how to split the money. The research participants could either accept the amount proposed, or reject it, in which case no one receives any money. Receiving unequal offers sets up a context in which they have to make trade-offs between self-interest and the enforcement of social norms of equality.

Abecedarian players who received intensive, five-year educational intervention including cognitive and social stimulation when they were young children in the 1970s strongly rejected unequal division of money across players, even if it meant they would miss out on hefty financial gains themselves.

“When someone rejects an offer, they are sending a very strong signal to the other player about the decision regarding how the money should be divided,” said Sébastien Hétu, co-first author of the study, who was a postdoctoral associate in the Montague laboratory at VTCRI when the research was conducted and is now an assistant professor at the University of Montreal. “People who received educational training through the Abecedarian Project were inclined to accept generally equal offers, but would reject disadvantageous and advantageous offers, in effect punishing transgressions that they judged to be outside of the social norm of equality.”

In addition, using computational modeling, the researchers discovered differences in social decision-making strategies. For example, participants who received educational interventions planned further into the future in another economic game.

“The participants who received early educational interventions were very sensitive to inequality, whether it was to their advantage or disadvantage. Our results also suggest that they placed more value in the long-term benefits of promoting social norms as opposed to short-term benefits from personal gains,” said Yi Luo, first author of the research and a postdoctoral associate in the Montague lab. “Our research shows investment in the early childhood education, especially in the education of highly vulnerable children from low-income families, can produce long-term effects in decision-making even decades after the educational experience.”

An international team collaborated to study the impact of early childhood interventions on social decision-making. In addition to serving as the Virginia Tech Carilion Vernon Mountcastle Research Professor at the VTCRI, a professor in the Department of Physics at the Virginia Tech College of Science, Montague is an honorary professor at University College London. Research team members Tobias Nolte and Peter Fonagy are with the Wellcome Trust Center for Neuroimaging at University College London. Co-author Peter Dayan, who was with the University College London when the work was done, was recently named director of the Max Planck Institute for Biological Cybernetics in Tuebingen, Germany. Andreas Hula is with the Austrian Institute of Technology.