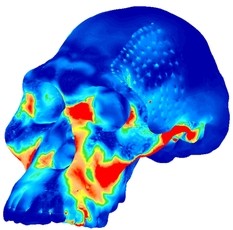 Australopithecus africanus, a human relative that lived in Africa more than two million years ago, had a skull that was well designed to withstand premolar biting. A. africanus likely used their large premolars (bicuspids) and structurally reinforced face to crack open and ingest large, hard nuts and seeds.

Newswise — New research conducted in part by researchers at The George Washington University has led to novel insights into how feeding and dietary adaptations may have shaped the evolution of the earliest humans.

An interdisciplinary, international team, involving GW graduate student Janine Chalk and GW researchers Brian Richmond, Peter Lucas, Paul Constantino, and Bernard Wood, studied ancient human skull structure and found that a 2 million-year-old early human relative likely ingested large nuts and seeds that may have been "foods of last resort." The team tested long-standing, influential ideas suggesting that early human skulls were structurally buttressed to resist stress in the face when biting with the premolar teeth, also known as bicuspids, on small, hard objects or when chewing large volumes of food using many teeth at once.

The team found that Australopithecus africanus, a human relative that lived in Africa more than two million years ago, had a skull that was well designed to withstand premolar biting, but that a small object or high volume diet was unlikely to explain the evolution of the face in this species. Instead, the team suggests that A. africanus likely used their large premolars and structurally reinforced face to crack open and ingest large, hard nuts and seeds. These early humans may have relied on these critical resources during times of scarcity when their preferred foods were unavailable.

"This research shows that our early ancestors were up to the task of eating some very challenging foods, and the approach of integrating anthropology and engineering promises to yield many more exciting results," said Richmond, GW paleoanthropologist and associate professor of anthropology.

The team's efforts drew on the strengths and techniques of anthropology and engineering that do not commonly work together. To conduct their research, the team used advanced experimental, comparative, and imaging techniques. They also used finite element analysis, an engineering method used to examine how objects of complex geometry respond. At GW, researchers used methods to create and analyze skull anatomy of early human relatives and provided findings from their research on the fracture mechanics of enamel and food.

Chalk, Ph.D. student and lead GW author, said, "We were able to use an interdisciplinary approach that allowed us to test some long-standing ideas and reach new conclusions about our ancestors' diets."

"Because Australopithecus lived during a period in which climates were changing and unstable, the ability to eat foods that were difficult to process may have been an ecologically significant adaptation," said David Strait, associate professor at University at Albany, co-director of the human biology program, and lead author. "Suppose that you're an animal that eats soft fruits. When those fruits disappear, you only have a few choices: move to a different habitat, die, or eat something else. Nut cracking gave these early humans the ability to shift their diet when times got tough."

"We would dearly love to be able to go back in time several million years ago and see what these fascinating creatures were eating, but we can't. So these simulations are the next best thing," said Wood, GW University Professor of Human Origins. "Fifty years ago, Louis Leakey called the first cousins of these creatures 'Nutcracker Man,' and maybe he was right after all."

The article, "The feeding biomechanics and dietary ecology of Australopithecus africanus," appears in the February 2009 issue of Proceedings of the National Academy of Sciences of the United States (PNAS). The research was made possible through grants from the National Science Foundation and the European Union.

PNAS is one of the world's most-cited multidisciplinary scientific serials. Since its establishment in 1914, it continues to publish cutting-edge research reports, commentaries, reviews, perspectives, colloquium papers, and actions of the academy. Coverage in PNAS spans the biological, physical, and social sciences. PNAS is published weekly in print, and daily online in PNAS Early Edition.

Located four blocks from the White House, The George Washington University was created by an Act of Congress in 1821. Today, GW is the largest institution of higher education in the nation's capital. The university offers comprehensive programs of undergraduate and graduate liberal arts study as well as degree programs in medicine, public health, law, engineering, education, business, and international affairs. Each year, GW enrolls a diverse population of undergraduate, graduate, and professional students from all 50 states, the District of Columbia, and more than 130 countries.

For more information about the Center for the Advanced Study of Hominid Paleobiology, visit www.gwu.edu/~hogwash/.