University of Delaware researcher focuses on healthy feeding entering childhood, starting with intake during the first few months of life 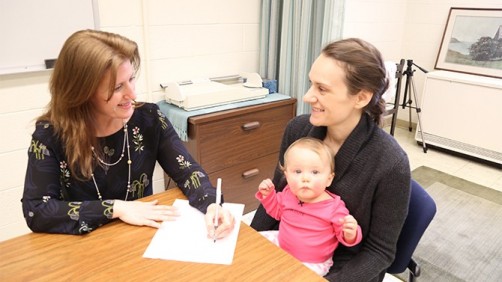 University of Delaware researcher Jillian Trabulsi wants to help all infants achieve a healthy weight as they enter childhood.

Newswise — Rapid weight gain in an infant's first six months of life is a risk factor for child- and adulthood obesity, according to researchers.

"Growth is a sign of nutritional intake and development, an insight into health," says Jillian Trabulsi, associate professor of nutrition and a registered dietitian. "Infant nutrition is a critical starting point."

With nearly 10 percent of infants considered "high weight for length," Trabulsi is interested in how to help all infants achieve a healthy weight as they enter childhood, starting with their intake during those first few months of life.

While the benefits of breastfeeding are well known -- breastfed babies tend to be better protected against rapid weight gain and obesity, among other things -- the reality is that 60 percent of American infants are exposed to infant formula by four months of age either as a sole source of nutrition or in combination with breastmilk.

Trabulsi's research therefore examines infant formula and how their various compositions affect energy balance, weight gain and growth. Already, she and her collaborator, Julie Mennella, have confirmed the finding of a previous study that found that healthy babies randomized to receive cow's milk formula had accelerated weight gain compared to babies fed a hydrolyzed protein formula (a formula typically for infants with cow's milk allergy), who gained weight similarly to their breastfed counterparts.

The preliminary findings on the energy balance mechanisms that led to the differential weight gain were presented at the fourth International Conference on Nutrition and Growth in Amsterdam, Netherlands, where Trabulsi and Mennella's abstract won The First 1,000 Days, Best Nutrition and Growth Research Award. The full manuscript of their findings has been submitted to a peer-reviewed journal.

"Breastfeeding is the preferred source of infant nutrition. For infants who are fed infant formula, either in combination with breast milk or as a sole source of nutrition, it is overwhelming when parents walk down the formula aisle," she says. "Parents should talk to their doctor or registered dietitian about how formulas differ in composition to find the one that is best for their baby."

International Conference on Nutrition and Growth