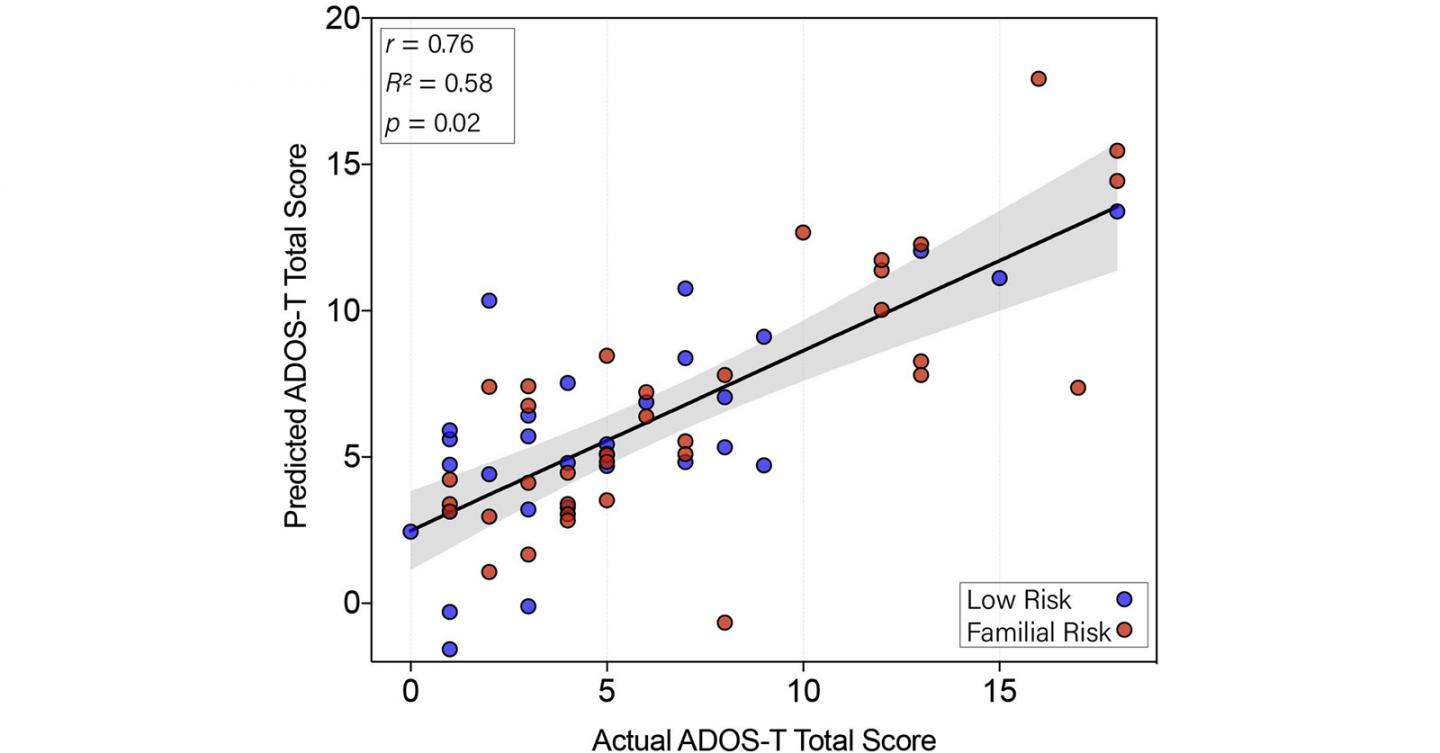 Correlation between actual and predicted scores from the ADOS-T, an assessment tool used by clinicians and researchers to assess social communication and repetitive behaviors associated with ASD in young children.

Newswise — Philadelphia, August 11, 2020 - Autism spectrum disorder (ASD) is rarely diagnosed until symptoms arise, often well into childhood. Evidence however, is mounting that developmental abnormalities likely emerge in the brain long before then: early identification of babies at risk for ASD could allow for interventions that would improve their developmental outcomes.

Researchers at the University of California, Los Angeles, have found evidence of signature brain activity in infants that predicted ASD symptoms later at 18 months old. The work, led by Shafali Jeste, MD, at UCLA appears in Biological Psychiatry: Cognitive Neuroscience and Neuroimaging, published by Elsevier.

"Early identification and intervention is key to getting better outcomes for children with neurodevelopmental disorders," said Cameron Carter, MD, Editor of Biological Psychiatry: Cognitive Neuroscience and Neuroimaging. "This study suggests that relatively low-cost diagnostic tools such as EEG may, in the not-too-distant future, help us to do a better job by identifying atypical brain development in infancy, when interventions may be even more impactful than when offered to toddlers and young children."

The researchers used electroencephalography (EEG), a non-invasive technique to measure electrical brain activity from outside the head and tracked neural activity in the so-called alpha range. Alpha-range activity is associated with long-range connections in the brain. The group then used an approach that allowed them to integrate data from across the brain.

Dr. Dickinson and the team performed EEG measurements in 65 3-month-old infants; 29 with low familial risk of ASD and 36 at high risk, with an affected older sibling.

When the children were 18-months-old, they were assessed for ASD by a trained clinician.

The researchers used computer modeling to predict symptom outcomes at 18 months based on the babies' neural activity in infancy. The model's predictions correlated with the actual symptoms measured in the toddlers. The model was not able to predict verbal or non-verbal congitive scores in the toddlers--suggesting that the brain connectivity pattern may be a specific marker of ASD.

"These findings improve our understanding of the neural differences that precede autism and show which brain regions reveal the earliest signs of disruption," Dr. Dickinson said. The findings bolster the idea that disrupted brain connectivity is a root cause of ASD, not a consequence.

The authors suggest that the low cost, wide availability and low risk of EEG make it a good screening tool to identify babies at higher risk of developing ASD or those with "borderline" symptoms, so that they get early intervention. "Mapping patterns of activity associated with autism could ultimately help identify infants who show early signs of neural risk," Dr. Dickinson added.

Biological Psychiatry: Cognitive Neuroscience and Neuroimaging is an official journal of the Society of Biological Psychiatry, whose purpose is to promote excellence in scientific research and education in fields that investigate the nature, causes, mechanisms and treatments of disorders of thought, emotion, or behavior. In accord with this mission, this peer-reviewed, rapid-publication, international journal focuses on studies using the tools and constructs of cognitive neuroscience, including the full range of non-invasive neuroimaging and human extra- and intracranial physiological recording methodologies. It publishes both basic and clinical studies, including those that incorporate genetic data, pharmacological challenges, and computational modeling approaches. http://www.sobp.org/bpcnni

Elsevier is a global information analytics business that helps scientists and clinicians to find new answers, reshape human knowledge, and tackle the most urgent human crises. For 140 years, we have partnered with the research world to curate and verify scientific knowledge. Today, we're committed to bringing that rigor to a new generation of platforms. Elsevier provides digital solutions and tools in the areas of strategic research management, R&D performance, clinical decision support, and professional education; including ScienceDirect, Scopus, SciVal, ClinicalKey and Sherpath. Elsevier publishes over 2,500 digitized journals, including The Lancet and Cell, 39,000 e-book titles and many iconic reference works, including Gray's Anatomy. Elsevier is part of RELX, a global provider of information-based analytics and decision tools for professional and business customers. http://www.elsevier.com