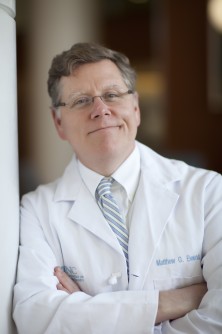 Newswise — The response of a patient with metastatic brain tumors to treatment with stereotactic radiosurgery in the first six-to-twelve weeks can indicate whether follow-up treatments and monitoring are necessary, according to research conducted at the University of North Carolina School of Medicine.

The study of 52 patients with metastatic brain legions, published in the January issue of the journal Neurosurgery, found that the tumors whose sizes decreased significantly after treatment with stereotactic radiosurgery (SRS) did not resume growth or require additional treatment. The research, conducted by a team led by Matthew G. Ewend, MD, chair of the UNC Department of Neurosurgery and member of the UNC Lineberger Comprehensive Cancer Center, could reduce the need to continually monitor patients who respond well to SRS.

“We measured the volume of the tumors over time to see if we could predict, based on what happened in the beginning, what would happen long term. What we found was that tumors that did not shrink in the beginning were more likely later to be correlated to a patient having a neurological problem or needing steroids,” said Dr. Ewend. “If they did shrink, they were more likely to stay under control long term.”

The advent of SRS systems allows physicians to target tumors with precise, high-dose beams of radiation. While the technique is in widespread use, current practice requires repeated check-ups to determine its effectiveness. The results of this study indicate that this monitoring may only be necessary for patients who do not respond favorably within the first six to twelve weeks after SRS treatment.

“You could take fewer MRIs or CAT scans afterwards if you got a good response, because we know they would not fail. We need less imaging with less worry for patients,” said Dr. Ewend.

Between 20 and 40 percent of adults with cancer develop brain tumors, which metastasize from cancers elsewhere in the body. The number of brain tumors treated by physicians has increased, as better treatments for the cancers that spawn them increase patient survival. Because of the systemic nature of these cancers, the survival implications of positive early response depend largely on how patients respond to therapy for their initial cancer.

“This is not in a vacuum. Even if you control the brain disease, they can still die of their other disease. With better control of the brain disease, the patients have a better chance of living longer, but it will take both improvements in systemic therapy and brain therapy,” said Dr. Ewend.

The UNC study included patients with lung, breast, melanoma and renal cell cancers. It builds on prior research that indicated a similar response in patients with clear cell renal cancer. Dr. Ewend said that future research will need to increase the number of patients to reinforce the results and determine what factors influence positive early response. One possibility for future research is to determine the genetic factors behind tumor response, which will allow researchers to develop a genetic test to help predict a patient’s outcome.

“We could eventually predict for individual patients before we treat them what the likelihood is that they would respond,” said Dr. Ewend.