Artist's conception of male Maiacetus inuus as it would have appeared in life. 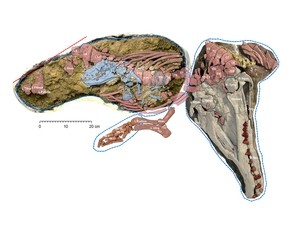 Fossils of female Maiacetus inuus with near-term fetus in utero, as found in the field. The female's skull is shaded white (teeth brown), and other parts of her skeleton are shaded red. The single fetus, in birth position inside the mother whale, is shaded blue (teeth orange). The specimen was collected in three plaster jackets (blue dashed lines), and additional bones were picked up separately. The red dashed line indicates the edge exposed by erosion. Copyright: University of Michigan Museum of Paleontology.

EDITORS: Images are available at: http://umich.edu/news/index.html?Releases/2009/Jan09/whale

Newswise — Two newly described fossil whales---a pregnant female and a male of the same species--reveal how primitive whales gave birth and provide new insights into how whales made the transition from land to sea.

The 47.5 million-year-old fossils, discovered in Pakistan in 2000 and 2004 and studied at the University of Michigan, are described in a paper published Feb. 4 in the online journal PLoS.

U-M paleontologist Philip Gingerich, who led the team that made the discoveries, was at first perplexed by the assortment of adult female and fetal bones found together. "When I first saw the small teeth in the field, I thought we were dealing with a small adult whale, but then we continued to expose the specimen and found ribs that seemed too large to go with those teeth," he said. "By the end of the day, I realized we had found a female whale with a fetus."

In fact, it is the first discovery of a fetal skeleton of an extinct whale in the group known as Archaeoceti, and the find represents a new species dubbed Maiacetus inuus. (Maiacetus means "mother whale," and Inuus was a Roman fertility god.) The fetus is positioned for head-first delivery, like land mammals but unlike modern whales, indicating that these whales still gave birth on land.

Another clue to the whales' lifestyle is the well-developed set of teeth in the fetus, suggesting that Maiacetus newborns were equipped to fend for themselves, rather than being helpless in early life.

The 8.5-foot-long male specimen, collected four years later from the same fossil beds, shares characteristic anatomical features with the female of the species, but its virtually complete skeleton is 12 percent larger overall, and its canine teeth or fangs 20 percent larger. Such size discrepancies are not uncommon among whales and their kin; in some species the females are larger, while in others the males are slightly to considerably bigger. The size difference of male and female Maiacetus is only moderate, hinting that the males didn't control territories or command harems of females.

The whales' big teeth, well-suited for catching and eating fish, suggest the animals made their livings in the sea, probably coming onto land only to rest, mate and give birth, said Gingerich, who is the Ermine Cowles Case Collegiate Professor of Paleontology and director of the U-M Museum of Paleontology. Like other primitive archaeocetes, Maiacetus had four legs modified for foot-powered swimming, and although these whales could support their weight on their flipper-like limbs, they probably couldn't travel far on land.

"They clearly were tied to the shore," Gingerich said. "They were living at the land-sea interface and going back and forth."

Compared with previous fossil whale finds, Maiacetus occupies an intermediate position on the evolutionary path that whales traversed as they made the transition from full-time land dwellers to dedicated denizens of the deep. As such, it offers invaluable, new information on structural and behavioral changes that accompanied that transition.

"Specimens this complete are virtual 'Rosetta stones'," Gingerich said, "providing insight into functional capabilities and life history of extinct animals that cannot be gained any other way."

Gingerich's coauthors on the PLoS paper are Munir ul-Haq of the Geological Survey of Pakistan; Wighart von Koenigswald of the University of Bonn in Germany; chief vertebrate preparator William Sanders of the U-M Museum of Paleontology; associate research scientist B. Holly Smith of the U-M Museum of Anthropology; and U-M postdoctoral scholar Iyad Zalmout.

The paper, "New Protocetid Whale from the Middle Eocene of Pakistan: Birth onLand, Precocial Development, and Sexual Dimorphism," will be available at http://dx.plos.org/10.1371/journal.pone.0004366 after the embargo lifts.