Methanogens sustain life under extremes of heat and cold 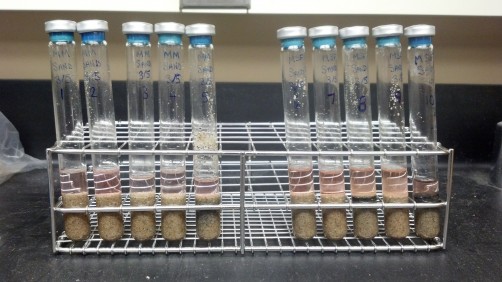 Methanogens contained in these test tubes, which also contained growth nutrients, sand and water, survived when subjected to Martian freeze-thaw cycles at the University of Arkansas.

Newswise — FAYETTEVILLE, Ark. – New research suggests that methanogens — among the simplest and oldest organisms on Earth — could survive on Mars.

Methanogens, microorganisms in the domain Archaea, use hydrogen as their energy source and carbon dioxide as their carbon source, to metabolize and produce methane, also known as natural gas. Methanogens live in swamps and marshes, but can also be found in the gut of cattle, termites and other herbivores as well as in dead and decaying matter.

Methanogens are anaerobic, so they they don’t require require oxygen. They don’t require organic nutrients and are non-photosynthetic, indicating they could exist in sub-surface environments and therefore are ideal candidates for life on Mars.

Rebecca Mickol, a doctoral student in space and planetary sciences at the University of Arkansas, subjected two species of methanogens to Martian conditions: Methanothermobacter wolfeii and Methanobacterium formicicum. Both species survived the Martian freeze-thaw cycles that Mickol replicated in her experiments.

“The surface temperature on Mars varies widely, often ranging between minus 90 degrees Celsius and 27 degrees Celsius over one Martian day,” Mickol said. “If any life were to exist on Mars right now, it would at least have to survive that temperature range. The survival of these two methanogen species exposed to long-term freeze/thaw cycles suggests methanogens could potentially inhabit the subsurface of Mars.”

Mickol conducted the study with Timothy Kral, professor of biological sciences in the Arkansas Center for Space and Planetary Sciences and lead scientist on the project. She is presenting her work at the 2014 General Meeting of the American Society for Microbiology, being held May 17-20 in Boston.

Since the 1990s, Kral has been studying methanogens and examining their ability to survive on Mars. In 2004, scientists discovered methane in the Martian atmosphere, and immediately the question of the source became an important one.

“When they made that discovery, we were really excited because you ask the question ‘What’s the source of that methane?’” Kral said. “One possibility would be methanogens.”

Mickol is currently interning at the Kennedy Space Center in Florida. The NASA Exobiology Program funded her research.

The Arkansas Center for Space and Planetary Sciences, founded in 2000, is an interdisciplinary research institute at the University of Arkansas with 25 graduate students and nearly $3 million in awarded grants.

2014 General Meeting of the American Society for Microbiology