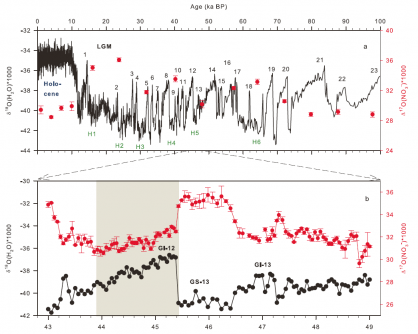 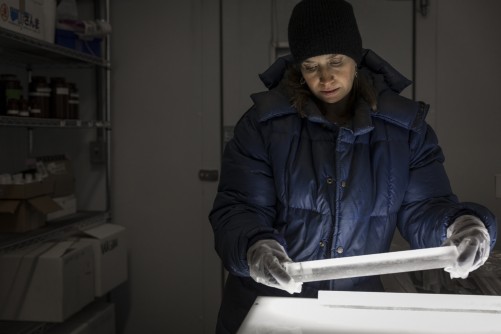 Becky Alexander in the cold room of the UW's IsoLab with sections of an ice core. Her group is analyzing these samples from Antarctica to see if they show the same trend as the Greenland cores. 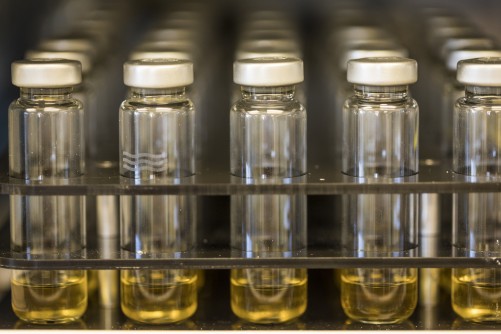 The vials contain bacteria that have been fed meltwater from 50-year slices of ice core. The bacteria excrete a gas into the upper part of the vial, which researchers can then analyze with machines that track the isotopic composition of gases.

Newswise — Unseen in the air around us are tiny molecules that drive the chemical cocktail of our atmosphere. As plants, animals, volcanoes, wildfires and human activities spew particles into the atmosphere, some of these molecules act as cleanup crews that remove that pollution.

The main molecules responsible for breaking down all these emissions are called oxidants. The oxygen-containing molecules, mainly ozone and hydrogen-based detergents, react with pollutants and reactive greenhouse gases, such as methane.

A University of Washington study published May 18 in the journal Nature finds that during large climate swings, oxidants shift in a different direction than researchers had expected, which means they need to rethink what controls these chemicals in our air.

"Oxidants are very reactive, and they react with pollutants and greenhouse gases and clean up the atmosphere," said corresponding author Becky Alexander, a UW associate professor of atmospheric sciences. "We wanted to see how the ability of the atmosphere to clean itself might change with climate."

First author Lei Geng, a former UW postdoctoral researcher now at Grenoble Alpes University, analyzed slices from a Greenland ice core in the UW's isotope chemistry lab. The 100,000-year core begins in a relatively warm period, covers a full ice age and ends in the present day, with several shorter temperature swings along the way. The researchers used a new method to get a first-ever read on changes in atmospheric oxidants — volatile chemicals that are not directly preserved in ice cores.

The researchers fed meltwater to bacteria that drank the liquid and then excreted a gas that can be measured by machines that track isotopic composition of gas. Looking at the weight of oxygen atoms from the meltwater let the team see how many had come from the two main oxidants: ozone, which varies in the atmosphere over time, versus the detergent molecules, which are expected to stay fairly constant.

"We found that the sign of the change was the complete opposite of what we expected," Alexander said. "And that indicates that what we thought were the main drivers for the abundance of oxidants were not actually the main controls, and we had to come up with some other mechanisms."

Atmospheric scientists had believed that ozone levels rise as the temperature increases. Ozone is produced with water vapor and emissions from plants, soil bacteria and other living things. All of these go up as the temperature warms. So the authors expected to find more ozone in the warmer climates.

Instead, the proportion of ozone actually increased in colder climates. When the temperature changes were small, ozone did increase with temperature, but for big temperature swings that relationship flipped, with more ozone in the cold periods.

One hypothesis proposed by the authors is a change in the circulation between the troposphere, the air above our heads, and the stratosphere, the higher-elevation layer close to where most airplanes fly. Air circulates between these two, moving up in the tropics and dropping back down at the poles. The stratosphere contains more ozone that is largely formed at those elevations in the tropics, so if the circulation quickens, then more ozone from the stratosphere would get carried down to the surface.

"There is evidence — strong evidence — showing that the Brewer-Dobson circulation became stronger during the last glacial maximum," said co-author Qiang Fu, a UW professor of atmospheric sciences. "That means there was less stratospheric ozone in the tropics but more in the high latitudes, and then more ozone going down from the stratosphere to the troposphere."

That's one explanation for why ozone would go up at the surface during cold climates. This shift in circulation would also cause more ultraviolet radiation to hit the tropics, and UV and water vapor are the main drivers for the formation of the other main group of oxidants, the detergents. The ice-age tropics could then become a rich source of detergents, which break down pollution and greenhouses gases like methane.

"Traditionally, ice-core methane records have been interpreted solely as a change in the source," Alexander said. "But land-surface models have not been able to simulate the full scale of the change of methane seen in ice cores. That suggests that maybe the lifetime of methane has changed, and the only way to do that is to change the amount of detergent in the atmosphere."

A second possible explanation for the puzzling ozone trend, researchers said, is a less-understood group of oxidants: halogens. These molecules are poorly studied, and it's not fully known how they influence climate, but researchers suspect they could react to affect the levels of other oxidants.

"The largest source of halogens is from sea salt, and we know from ice cores that sea salt is much higher in colder climates," Alexander said. "Sea ice also changes with climate, of course."

The authors suspect that both mechanisms — the high-level circulation and chemical reactions with halogens — could affect oxidants during big swings in Earth's temperature.

"The changes we measured in ozone levels seem to be quite large if you only consider one mechanism at a time, suggesting that they might be acting simultaneously, and not necessarily independently from one another," Alexander said. 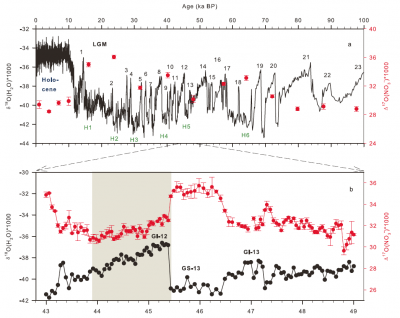 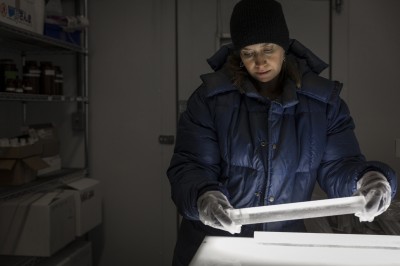 Caption: Becky Alexander in the cold room of the UW's IsoLab with sections of an ice core. Her group is analyzing these samples from Antarctica to see if they show the same trend as the Greenland cores. 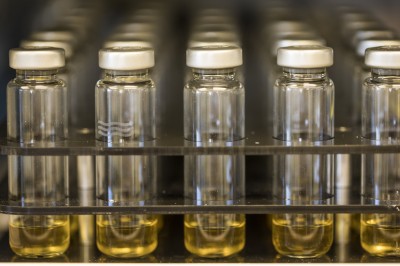 Caption: The vials contain bacteria that have been fed meltwater from 50-year slices of ice core. The bacteria excrete a gas into the upper part of the vial, which researchers can then analyze with machines that track the isotopic composition of gases.