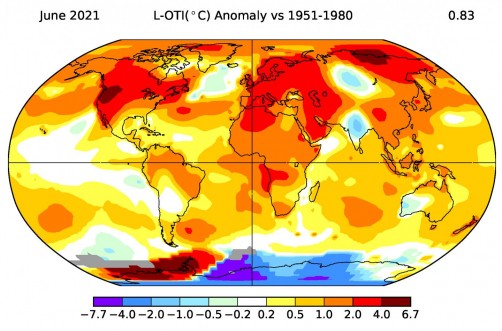 Map of land-ocean temperature index anomaly in June relative to the 1951-1980 baseline.

Newswise — Twenty months after more than 11,000 scientists declared a global climate emergency, establishing a set of benchmarks for the planet’s health, an international coalition says its update on those vital signs “largely reflect the consequences of an unrelenting ‘business as usual’ approach to climate change policy”.

Dr Thomas Newsome from the University of Sydney said: “Especially troubling is the increase in climate-related disasters, including the 2019-20 Australian megafires, and the fact that three main greenhouse gases – carbon dioxide, methane and nitrous oxide – set records for atmospheric concentrations in 2020 and again in 2021. This was despite shifts during the COVID-19 pandemic.”

Dr Newsome and co-authors, led by Professor William Ripple and Dr Christopher Wolf from Oregon State University, lay out their climate update in a paper published today in BioScience.

The research team calls for a “three-pronged near-term policy approach”, including:

Dr Newsome said: “The COVID pandemic has shown dips in human activity are not enough to avoid climate disaster: we need structural transformation of the economy.”

The authors say the introduction of a global price for carbon needs to be high enough to induce “decarbonisation” across the industrial and consumption spectrum.

The scientists note an unprecedented surge in climate-related disasters since 2019, including devastating floods, record heatwaves, and extraordinary storms and fires.

“There is growing evidence we are getting close to or have already gone beyond tipping points associated with important parts of the Earth system, including warm-water coral reefs, the Amazon rainforest and the West Antarctic and Greenland ice sheets,” said Professor Ripple, distinguished professor of ecology in the Oregon State University College of Forestry.

Last year was the second hottest year in recorded history, with the five hottest years on record all occurring since 2015. And in April this year, carbon dioxide concentration reached 416 parts per million, the highest monthly global average concentration ever recorded.

With its myriad economic interruptions, the COVID-19 pandemic had the side effect of providing some climate relief but only of the ephemeral variety, the scientists say.

“Global gross domestic product dropped by 3.6 percent in 2020 but is projected to rebound to an all-time high,” Professor Ripple said. “Likely because of the pandemic, fossil-fuel consumption has gone down since 2019, as have carbon dioxide emissions and airline travel levels. All of these are expected to significantly rise with the opening of the economy.”

A major lesson of the pandemic, the authors say, is that even sharply decreased transportation and consumption are insufficient to tackle climate change and instead transformational system changes are required, even if politically unpopular.

Despite pledging to “build back better” by globally directing COVID-19 recovery investments toward environmental policies, only 17 percent of such funds had been allocated that way as of early March 2021.

“As long as humanity’s pressure on the Earth system continues, attempted remedies will only redistribute the pressure,” Dr Wolf said. “But by halting the unsustainable exploitation of natural habitats, we can reduce zoonotic disease transmission risks, protect carbon stocks and conserve biodiversity, all at the same time.”

Other vital signs the authors highlight:

The paper comes out as the International Panel on Climate Change prepares to release its report, on the physical science of climate change, on 9 August. The IPCC says the report will include an assessment of scientific knowledge about the warming of the planet and projections for future warming.

The 2019 climate emergency paper, also published in BioScience, at the time had more than 11,000 scientist signatories from 153 countries. The signatories now total nearly 14,000 from 158 countries.

DOWNLOAD the paper, climate images and photo of Dr Newsome at this link.

Dr Thomas Newsome received no additional funding for this publication.