Do they speed or slow climate change? 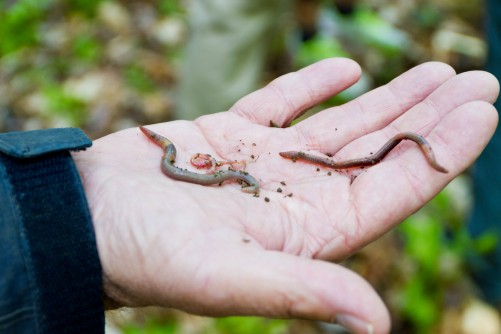 Three species of earthworms, from one hole in Hinesburg, Vt. University of Vermont researchers are tracking the wriggling migration of these invaders, trying to understand how their soil-eating ways are affecting New England forests, and, perhaps, global stocks of carbon. 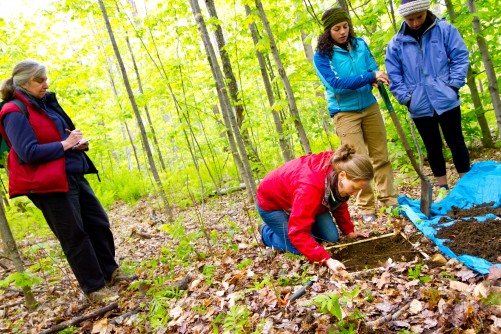 Newswise — Beavers reshape landscapes with their dams. Wolves control elk populations. Sea otters protect kelp forests by eating sea urchins. These are what ecologists call “keystone” species: critters that control an ecosystem and have a disproportionate impact on other species. And in the forests of New England, what are the keystone species?

None of the earthworms in New England's forests are native. There are sixteen earthworm species reported in Vermont—and they’re all exotic; fourteen are European and two are Asian. And many of these worms are invaders, spreading silently underground. “Perhaps ten or eleven are invasive,” says Josef Gorres, a professor at the University of Vermont.

“He’s an earthwormologist,” says Don Ross, with a wry smile. But the research project Ross is leading is no joke. Also a professor at UVM, Ross, a soil chemist, wants to better understand the effects of all these earthworms on the soils of New England's Northern Forest. He and Gorres know the worms are upsetting forest ecosystems — and they also think the worms have a role to play in global climate change. But what that role is — good guy or villain? — they’re not sure.

Earthworm excretaWhich is why, on a gentle hillside in the town forest of Hinesburg, Vt., Ross, Gorres, three other scientists, and five students dig a hole in the ground. Surrounding them, a stand of youngish trees — paper birch, sugar maple, white ash — forms a pleasing green glow. The trees are reclaiming a farm field abandoned in the 1930s. Each tree, as it grows, sucks in carbon dioxide from the air, converting some of it into leaves and wood. In other words, a forest stores carbon from the atmosphere that would otherwise contribute to the greenhouse effect — and global warming.

But for all the carbon being stored in these trees aboveground, a roughly equal amount of carbon is stored belowground. And that’s where the earthworms come in.

Graduate student Meghan Knowles holds up a clump of soil. “Most of this is earthworm poop, because this is such a highly invaded site,” she says. “Most of this soil has been processed by earthworms.” Then she teases apart the clump. “We’re sifting through the litter to try to find earthworms and then we’re going to look for middens — mounds — that are an indication of deep burrowing species,” she says.

On the edge of the hole, a thin layer of leaves on the top surface is visible and then an even mix of blackish-brown soil goes down into the darkness. “Look at this patch,” say Gorres, “there’s this leaf layer and then we’re straight into the top mineral layer.” Yes, Dr. Watson, worms have been here. In a forest like this without worms, there would first be a “duff layer,” which is a spongy, bouncy layer above the deeper mineral soils, “and this just doesn’t exist in here anymore,” says Gorres. The worms have, literally, eaten it.

Carbon on balanceThis efficient decomposition is why home gardeners love earthworms: they break down organic matter, releasing nutrients. But in a New England forest they’re not so benign, since in breaking down that organic matter they redistribute carbon throughout the soil, changing the basic layering of forest floors — and the tree and understory species that depend on this system. “A lot of plants that use the duff layer as a germination medium or a seed bank will no longer be around,” says Gorres.

The worms also release carbon dioxide as they eat, adding to the forest’s carbon emissions. It might seem that earthworms are all villain in the drama that is the global carbon cycle. But not so fast, the Vermont scientists say.

“When the earthworms first invade, they change things dramatically and there is a big carbon loss and change in the forest floor,” says Don Ross, holding up three different species on his hand. As these earthworms move through the soil, they’re ingesting mineral particles along with organic particles, glomming them together inside their digestive track. And “when they poop,” says Knowles, “they produce what we call an aggregate.”

Over time, it seems, these soil aggregates might physically protect the organic carbon inside them, forming a barrier to the microorganisms that could otherwise break it down. “So the question is,” Gorres asks, over the long run, “do earthworms create a negative balance or positive balance on carbon?”

Part of this research project — sponsored by the Northeastern States Research Cooperative, and exploring eighteen forest plots across Vermont — aims to answer that question. “Earthworms create these stable aggregate structures,” says Knowles, who is doing a lot of the digging and lab work to get to the bottom of this question. “And so I’m trying to quantitatively distinguish between what earthworms are creating and what is already here, to figure out if earthworms are increasing that physical protection of carbon.”

Land use historyRecent studies in the Northern Forest have shown that land use changes — like agricultural abandonment or intensive tree harvesting — can dramatically change the amount of carbon stored in that land’s soils. Much of the Northern Forest that was previously tilled farmland is currently gaining stored carbon. But what was the soil carbon like before European settlement? And how much does the current earthworm invasion threaten these gains? It’s hard to say.

“The presumption is that the first agricultural immigrants brought earthworms with them,” says historical ecologist Charlie Cogbill, one of the scientists on this project, “but we don’t know where the baseline is without worms.”

In any case, both Cogbill and Don Ross say, land use history had a huge effect on the current status of the forest, and also, probably, on whether an area has earthworms today. The eighteen plots the team is studying intensively have widely varying amounts of belowground carbon — and preliminary data show about half of them appear to have earthworms in them. That variability likely reflects differing land use histories. “Many of the forests here developed in the presence of earthworms, when ag land was abandoned,” Gorres says. "That is likely to be quite different than a forest that has regenerated from a stand that was timber harvested and did not have any earthworms."

There are many variables of soil type, specific type and intensity of land use practice, microclimate and others that make each site different. “In Vermont and New England, the earthworm distribution is very patchy,” says Gorres. “In some places, earthworms are abundant. Then step three meters in another direction, and there is a complete forest floor and no earthworms. Why is that? Nobody has really been able to answer that.”

This project may not be able to answer that question either, but it does seek to broadly survey the extent of the worm invasion across Vermont — and to better understand how the interaction between earthworm activity and land use history influences the amount of carbon in the soil.

Carbon creditsThis is a matter of more than scientific interest. “When we’re trying to set up policies about how to increase sequestration of carbon from the air,” says Sandy Wilmot, a forest scientist with the State of Vermont and a partner on this project, “it would be very helpful to know how to manage the soil as well as the aboveground.” For example, differing forestry techniques clearly affect aboveground carbon storage, and are likely to also influence belowground carbon too. They may also have an effect on the likelihood of earthworm invasion.

Human-generated carbon — and its capture — is starting to develop into big business. Around the world, various types of carbon markets are emerging in the effort to slow and regulate climate change. Credits in these markets generally depend on being able to show that carbon is being sequestered out of the atmosphere — and held long-term. But belowground carbon is nearly impossible to include in these markets, or other mitigation efforts, because it’s hard to measure.

“Forest soil carbon is poorly understood and so it’s often not counted or even removed from some forest carbon protocols,” says Cecilia Danks, a social scientist at UVM. “I’ve been brought in to this earthworm project to try to figure out: is there a carbon market connection? You don’t get credit in the market right now — for the most part — for forest soil carbon.” This research effort aims to move toward a better accounting of carbon in the Northern Forest, and, perhaps, Danks hopes, the chance for New England forestland owners to get a return on the carbon stored below their feet, even carbon passing through the bowel of an invasive earthworm. 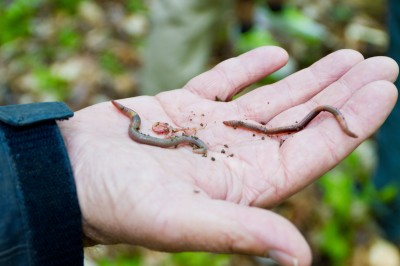 Caption: Three species of earthworms, from one hole in Hinesburg, Vt. University of Vermont researchers are tracking the wriggling migration of these invaders, trying to understand how their soil-eating ways are affecting New England forests, and, perhaps, global stocks of carbon. 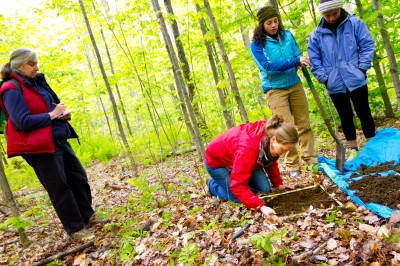