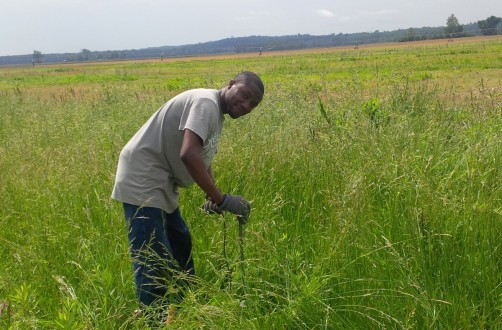 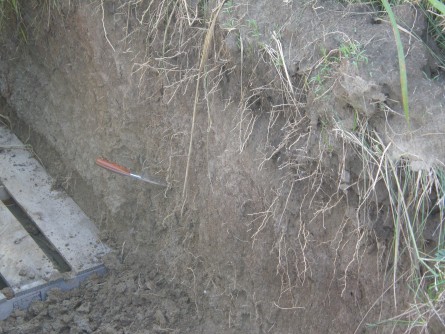 The roots of miscanthus break up the soil, keeping it from becoming compacted.

Newswise — Nov. 8, 2017 - Soil characteristics like organic matter content and moisture play a vital role in helping plants flourish. It turns out that soil temperature is just as important. Every plant needs a certain soil temperature to thrive. If the temperature changes too quickly, plants won’t do well. Their seeds won’t germinate or their roots will die.

“Most plants are sensitive to extreme changes in soil temperature,” said Samuel Haruna, a researcher at Middle Tennessee State University. “You don’t want it to change too quickly because the plants can’t cope with it.”

Many factors influence the ability of soil to buffer against temperature changes. For example, when soil is compacted the soil temperature can change quickly. That’s because soil particles transfer temperatures much faster when they are squished together. When farmers drag heavy machinery over the soil, the soil particles compact.  Soil temperature is also affected by moisture: more moisture keeps soils from heating too quickly.

Research has shown that both cover crops and perennial biofuel crops can relieve soil compaction. Cover crops are generally planted between cash crops such as corn and soybeans to protect the bare soil. They shade the soil and help reduce soil water evaporation. Their roots also add organic matter to the soil and prevent soil erosion. This also keeps the soil spongy, helping it retain water.

But Haruna wanted to know if perennial biofuel and cover crops could also help soils protect themselves from fluctuating temperatures.  Haruna and a team of researchers grew several types of cover and perennial biofuel crops in the field. Afterwards, they tested the soils in the lab for their ability to regulate temperature.

“I was amazed at the results,” Haruna said. He found both perennial biofuel and cover crops help soils shield against extreme temperatures. They do this by slowing down how quickly temperatures spread through the soil. Their roots break up the soil, preventing soil molecules from clumping together and heating or cooling quickly.  The roots of both crops also add organic matter to the soil, which helps regulate temperature.

Additionally, perennial biofuel and cover crops help the soil retain moisture. “Water generally has a high ability to buffer against temperature changes,” said Haruna. “So if soil has a high water content it has a greater ability to protect the soil.”

Although Haruna advocates for more use of cover crops, he said it’s not always easy to incorporate them into farms. “These crops require more work, more financial investment, and more knowledge,” he said. “But they can do much for soil health.” Including, as Haruna’s research shows, shielding plants from extreme temperature changes.

“Climate change can cause temperature fluctuations, and if not curtailed, may affect crop productivity in the future,” he said. “And we need to buffer against these extreme changes within the soil.”

Haruna hopes to take his research from the lab and into the field. He says a field experiment will help him and his team collect more data and flesh out his findings. 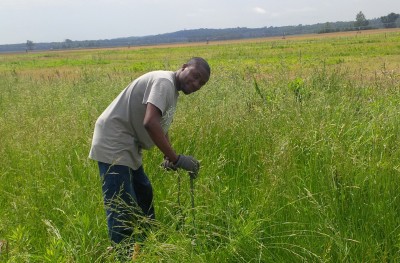 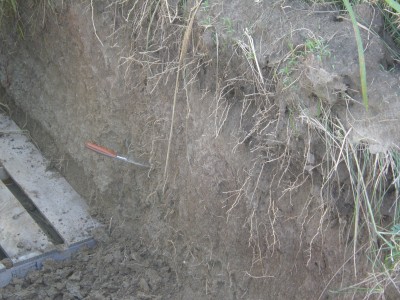 Caption: The roots of miscanthus break up the soil, keeping it from becoming compacted.