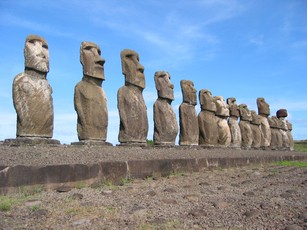 These Easter Island monoliths have endured for centuries. New research suggests that a compound first discovered in soil of the remote South Pacific island might help humans stand the test of time, too.

Newswise — The giant monoliths of Easter Island are worn, but they have endured for centuries. New research suggests that a compound first discovered in the soil of the South Pacific island might help us stand the test of time, too.

Today in the journal Nature, The University of Texas Health Science Center at San Antonio and two collaborating centers reported that the Easter Island compound " called "rapamycin" after the island's Polynesian name, Rapa Nui " extended the expected lifespan of middle-aged mice by 28 percent to 38 percent. In human terms, this would be greater than the predicted increase in extra years of life if cancer and heart disease were both cured and prevented.

The rapamycin was given to the mice at an age equivalent to 60 years old in humans.

The studies are part of the National Institute on Aging (NIA) Interventions Testing Program, which seeks compounds that might help people remain active and disease-free throughout their lives. The other two centers involved are the University of Michigan at Ann Arbor and Jackson Laboratory in Bar Harbor, Maine.

The Texas study was led by scientists at two institutes at the UT Health Science Center: the Institute of Biotechnology (IBT) and the Barshop Institute for Longevity and Aging Studies.

"I've been in aging research for 35 years and there have been many so-called 'anti-aging' interventions over those years that were never successful," said Arlan G. Richardson, Ph.D., director of the Barshop Institute. "I never thought we would find an anti-aging pill for people in my lifetime; however, rapamycin shows a great deal of promise to do just that."

Discovered in the 1970s, rapamycin was first noted for its anti-fungal properties and later was used to prevent organ rejection in transplant patients. It also is used in stents, which are implanted in patients during angioplasty to keep coronary arteries open. It is in clinical trials for the treatment of cancer.

The new aging experiments found that adding rapamycin to the diet of older mice increased their lifespan. The results were the same in Texas, Michigan and Maine.

"We believe this is the first convincing evidence that the aging process can be slowed and lifespan can be extended by a drug therapy starting at an advanced age," said Randy Strong, Ph.D., who directs the NIA-funded Aging Interventions Testing Center in San Antonio. He is a professor of pharmacology at the UT Health Science Center and a senior research career scientist with the South Texas Veterans Health Care System.

The findings have "interesting implications for our understanding of the aging process," said Z. Dave Sharp, Ph.D., director of the Institute of Biotechnology and professor and chairman of the Health Science Center's Department of Molecular Medicine.

"In addition," Dr. Sharp said, "the findings have immediate implications for preventive medicine and human health, in that rapamycin is already in clinical usage."

It does so through a cellular protein called mTOR (mammalian target of rapamycin), which controls many processes in cell metabolism and responses to stress.

A decade ago, Dr. Sharp proposed to his colleagues that mTOR might be involved in calorie restriction. "It seemed like an off-the-wall idea at that time," Dr. Richardson said.

In 2004, a year after the launch of the NIA Interventions Testing Program, Dr. Sharp submitted a proposal that rapamycin be studied for anti-aging effects. The proposal was approved, and testing centers in San Antonio and elsewhere began to include rapamycin in the diets of mice.

The male and female mice were cross-bred from four different strains of mice to more closely mimic the genetic diversity and disease susceptibility of the human population.

Dr. Strong soon recognized a problem: Rapamycin was not stable enough in food or in the digestive tract to register in the animals' blood level. He worked with the Southwest Research Institute in San Antonio to improve the bioavailability of the compound through a process called microencapsulation. The reformulated drug was stable in the diet fed to the mice and bypassed the stomach to release in the intestine, where it could more reliably enter the bloodstream.

The original goal was to begin feeding the mice at 4 months of age, but because of the delay caused by developing the new formulation, the mice were not started until they were 20 months old " the equivalent of 60 years of age in humans.

The teams decided to try the rapamycin intervention anyway.

"I did not think that it would work because the mice were too old when the treatment was started," Dr. Richardson said. "Most reports indicate that calorie restriction doesn't work when implemented in old animals. The fact that rapamycin increases lifespan in relatively old mice was totally unexpected."

Added Dr. Strong: "This study has clearly identified a potential therapeutic target for the development of drugs aimed at preventing age-related diseases and extending healthy lifespan. If rapamycin, or drugs like rapamycin, works as envisioned, the potential reduction in overall health cost for the U.S. and the world will be enormous."

Leaders of the other interventions testing centers are Richard Miller, M.D., Ph.D., of the University of Michigan and David Harrison, Ph.D., at the Jackson Laboratories.

About The University of Texas Health Science Center at San Antonio

The University of Texas Health Science Center at San Antonio is the leading research institution in South Texas and one of the major health sciences universities in the world. With an operating budget of $668 million, the Health Science Center is the chief catalyst for the $16.3 billion biosciences and health care sector in San Antonio's economy. The Health Science Center has had an estimated $36 billion impact on the region since inception and has expanded to six campuses in San Antonio, Laredo, Harlingen and Edinburg. More than 26,400 graduates (physicians, dentists, nurses, scientists and other health professionals) serve in their fields, including many in Texas. Health Science Center faculty are international leaders in cancer, cardiovascular disease, diabetes, aging, stroke prevention, kidney disease, orthopaedics, research imaging, transplant surgery, psychiatry and clinical neurosciences, pain management, genetics, nursing, dentistry and many other fields. For more information, visit www.uthscsa.edu.