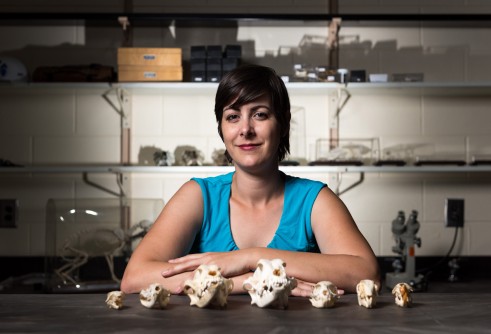 Georgia Tech Research Scientist Jenny McGuire is interested in spatial questions about the ecological and evolutionary implications of climate change. In a new paper, she and collaborators quantify the concept of climate connectivity in the United States. 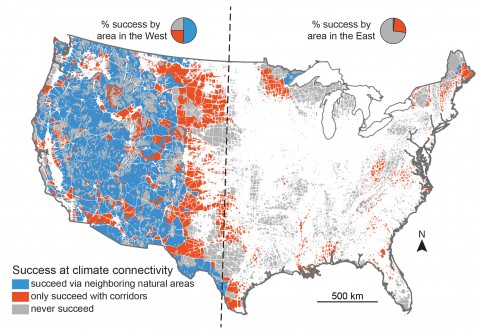 Newswise — For plants and animals fleeing rising temperatures, varying precipitation patterns and other effects of climate change, the eastern United States will need improved “climate connectivity” for these species to have a better shot at survival.

Western areas of the U.S. provide greater temperature ranges and fewer human interruptions than eastern landscapes, allowing plants and animals there to move toward more hospitable climates with fewer obstacles. A new study has found that only 2 percent of the eastern U.S. provides the kind of climate connectivity required by species that will likely need to migrate, compared to 51 percent of the western United States.

The research, reported June 13 in the journal Proceedings of the National Academy of Sciences, for the first time quantifies the concept of climate connectivity in the United States. The paper suggests that creating climate-specific corridors between natural areas could improve that connectivity to as much as 65 percent nationwide, boosting the chances of survival by more species. The issue is especially critical in the Southeast, which could provide routes to cooler northern climates as temperatures rise.

“Species are going to have to move in response to climate change, and we can act to both facilitate movement and create an environment that will prevent loss of biodiversity without a lot of pain to ourselves,” said Jenny McGuire, a research scientist in the School of Biology at the Georgia Institute of Technology. “If we really start to be strategic about planning to prevent biodiversity loss, we can help species adjust effectively to climate change.”

Creating and maintaining connections between natural areas has long been thought critical to allowing plants and animals to move in search of suitable climate conditions, she explained. Some species will have to move hundreds of kilometers over the course of a half-century.

McGuire and her collaborators set out to determine the practicality of that kind of travel and test whether these human initiatives could improve migration to cooler areas. Using detailed maps of human impact created by David Theobald at Conservation Partners in Fort Collins, Colorado, they distinguished natural areas from areas disturbed by human activity across the United States. They then calculated the coolest temperatures that could be found by moving within neighboring natural areas.

Co-authors Tristan Nuñez from the University of California Berkeley, Joshua Lawler from the University of Washington, Brad McRae from the Nature Conservancy and others created a program called Climate Linkage Mapper. They then used this program to find the easiest pathways across climate gradients and human-disturbed regions to connect natural areas.

“A lot of these land areas are very fragmented and broken up,” McGuire said. “We studied what could happen if we were to provide additional connectivity that would allow species to move across the landscape through climate corridors. We asked how far they could actually go and what would be the coolest temperatures they could find.”

Improving connectivity would require rehabilitating forests and planting natural habitats adjacent to interruptions such as large agricultural fields or other areas where natural foliage has been destroyed. It could also mean building natural overpasses that would allow animals to cross highways, helping them avoid collisions with vehicles.

Not only will animals have to move, but they’ll also need to track changes in the environment and food, such as specific prey for carnivores and the right plants for herbivores. Some birds and large animals may be able to make that adjustment, but many smaller creatures may struggle to track the food and climate they need.

“A lot of them are going to have a hard time,” said McGuire. “For plants and animals in the East, there is a higher potential for extinction due to an inability to adapt to climate change. We have a high diversity of amphibians and other species that are going to struggle.”

The negative impacts of climate change won’t affect all species equally, McGuire said. Species with small ranges or those with specialist diets or habitats will struggle the most.

“Not all plants and animals will have to move,” she explained. “There is a subset of them that will be able to hunker down where they are. There will be some species that are really widespread and will end up just having some population losses. But especially for species that have smaller ranges, there will be some loss of biodiversity as they are unable to jump across agricultural fields or major roadways.”

The Southeast, especially the coastal plains from Louisiana through Virginia, could create a bottleneck for species trying to move north away from rising temperatures and sea levels. “The Southeast ends up being a really important area for a lot of vertebrate species that we know are going to have to move into the Appalachian area and even potentially farther north,” she added.

In future work, the researchers hope to examine individual species to determine which ones are most likely to struggle with the changing climate, and which areas of the country are likely to be most impacted by conflicts between humans and relocating animals.

“We see a lot of species’ distributions really start to wink out after about 50 years, but it is tricky to look at future predictions because we will have a lot of habitat loss predicted using our models,” McGuire said. “Change is perpetual, but we are going to have to scramble to prepare for this.”

The research was supported by the U.S. National Park Service and by the Packard Foundation. 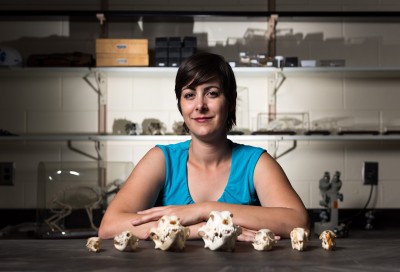 Caption: Georgia Tech Research Scientist Jenny McGuire is interested in spatial questions about the ecological and evolutionary implications of climate change. In a new paper, she and collaborators quantify the concept of climate connectivity in the United States. 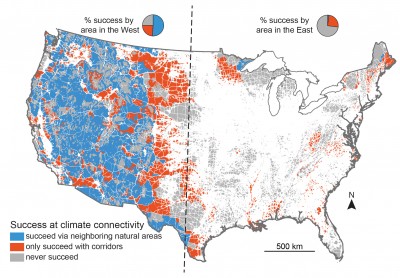