Researchers are eavesdropping on marine mammals within the Bering Strait via “passive acoustic monitoring” to observe changes in the ecology of the Pacific Arctic by documenting the use of this region by species previously excluded by sea ice. 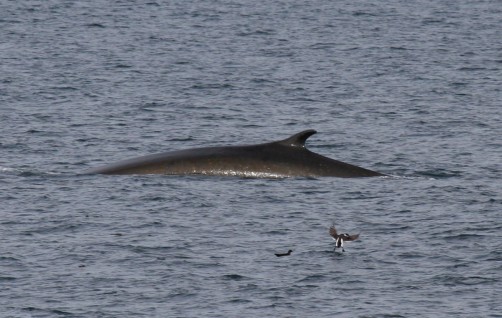 Newswise — WASHINGTON, D.C., November 2, 2015 – Climate change hasn’t been kind to the Arctic Circle, as evidenced by the decrease of seasonal ice in the area and the encroachment of temperate species. One way to monitor impacts to the ecosystem is by observing the changes in occurrence or distribution of sea birds and marine mammals.

So a team of researchers is listening to the sounds made by marine mammals within the Arctic to monitor their presence year round. During the Acoustical Society of America’s Fall 2015 Meeting, being held Nov. 2-6, in Jacksonville, Fla., Kathleen Stafford, principal oceanographer for the Applied Physics Lab at the University of Washington, will describe their work and the passive acoustic monitoring techniques involved.

The team is interested in determining the seasonal and inter-annual occurrence of summer whales in the gateway to the Pacific Arctic to discover if they are spending more time within the region.

This is also key to the native Yupik and Iñupiat, who inhabit the Bering Strait region and rely heavily on marine mammals for subsistence. “Changes in the environment cause changes in animal distributions or seasonal occurrences that can affect access to subsistence species,” said Stafford.

To do this, the researchers use underwater microphones called hydrophones on oceanographic moorings to listen for the sounds made by marine mammals.

“This passive acoustic monitoring technique allows us to detect the presence of vocalizing marine mammals continuously — 24 hours per day — in all weather conditions, over periods of weeks to months, over distances of 20 to 30 kilometers, and is a proven sampling method in the waters offshore Alaska,” explained Stafford.

The microphones record data at a sample rate of 8kHz, so the group listens up to 4kHz — for scale, the highest note on a normally tuned, standard piano is 4.186 kHz — to include signals produced by large whales like fins, humpbacks, bowheads and killer whales, as well as pinnipeds such as bearded seals and walrus. The data is recorded on a “duty cycle” of 15 minutes per hour to enable the instruments to continue to record for as long as possible.

This provides “a window into Arctic and sub-Arctic species in regions and seasons in which other more traditional — visual — methodologies aren’t feasible,” Stafford added. “The Arctic is still very dark and cold in the dead of winter, and can be stormy and foggy at other times. And although we can’t directly observe it, by eavesdropping under the ice, we can hear quite a lot of animal activity going on.”

Once the data is recorded, the researchers need to retrieve the instruments. They then examine spectrograms — pictures of frequency and amplitude over time — to visually document the presence of different species.

One of the biggest surprises they’ve encountered so far? Humpback whales singing in the Chukchi Sea through the fall — a male reproductive display previously thought to be confined to tropical breeding grounds.

The team also confirmed that summer whales are in the Arctic throughout the open water season now. “Summer whales have always occurred north of Bering Strait, although not in great numbers, and not in September, October, or November, when we hear them now,” Stafford said.

Stafford and colleagues will continue their long-term data collection to document the inter-seasonal and inter-annual presence of vocal marine mammals in the Bering Strait by integrating oceanographic drivers — sea ice, temperature, current speed and direction, and water mass properties — with acoustic detections.

“By coupling acoustic recorders with concurrently collected oceanographic data, we can explore relationships between the physical and biological context of residence in or migration through the Bering Strait, and quantify the animals’ fluxes in this gateway to the Arctic in a manner that allows the investigation of seasonal and annual changes,” she added.

Presentation #1aAO4, "Summer and winter whales in the Pacific Arctic," by Kate Stafford will be take place on Monday, Nov. 2, 2015, at 10:40 AM in River Terrace 2. The abstract can be found by searching for the presentation number here: https://asa2015fall.abstractcentral.com/planner.jsp

The 170th Meeting of the Acoustical Society of America (ASA) will be held Nov. 2-6, 2015, at the Hyatt Regency Jacksonville Riverfront Hotel. It will feature more than 700 presentations on sound and its applications in physics, engineering, music, architecture and medicine. Reporters are invited to cover the meeting remotely or attend in person for free. PRESS REGISTRATION

We will grant free registration to credentialed journalists and professional freelance journalists. If you are a reporter and would like to attend, contact John Arnst (jarnst@aip.org, 301-209-3096) who can also help with setting up interviews and obtaining images, sound clips, or background information.

In the coming weeks, ASA’s World Wide Press Room will be updated with additional tips on dozens of newsworthy stories and with lay-language papers, which are 300-1200 word summaries of presentations written by scientists for a general audience and accompanied by photos, audio, and video. You can visit the site, beginning in late October, at http://acoustics.org/current-meeting. LIVE MEDIA WEBCAST

A press briefing featuring a selection of newsworthy research will be webcast live from the conference on Tuesday, Nov. 3. Topics and time of webcast to be announced. To register, visit www.aipwebcasting.com

170th Meeting of the Acoustical Society of America (ASA)