Economics = MC2 -- A Portrait of the Modern Physics Startup 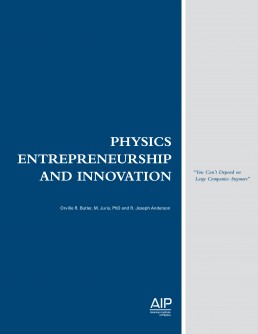 Newswise — WASHINGTON D.C., April 23, 2014 -- For much of the 20th century, many of the technological innovations that drove U.S. economic growth emerged from "idea factories" housed within large companies -- research units like Bell Labs or Xerox PARC that developed everything from the transistor to the computer mouse. In recent decades, however, many large high-tech companies have eliminated in-house research programs, turning instead to startup companies as their primary source of breakthrough innovations.

“Small startups have replaced corporate research centers as the drivers of American innovation,” said Orville Butler, a former historian at the American Institute of Physics (AIP) and coauthor of a new AIP report on physics startups.

The report, titled Physics Entrepreneurship and Innovation, is based on extensive interviews with 140 PhD physicists and other professionals who co-founded and work at some 91 startup companies in 14 states that were established in the last few decades. These companies are engaged in making medical devices, manufacturing tools, nanotechnology, lasers and optical devices, renewable energy technologies and other products.

There is no one winning formula for a successful physics startup, said Joe Anderson, director of AIP's Niels Bohr Library & Archives and co-author of the new report. Many physics startups can be found in the same Boston and Silicon Valley zip codes that are also hotspots for biotech and internet startups, but many are found far from the those twin poles. Instead they are clustered in regions scattered across the west coast, southern states and the Midwest -- in places where venture capital funding may not be as robust or where the particular technology transfer processes in place at one nearby large state university may dominate the business climate. But that seems to work for many companies.

"One of the deliberate things people try to do in the United States and abroad is to create another Silicon Valley, but it doesn't always work," Anderson said. "This is a different kind of phenomenon."

One of the major differences, the report found, is between the culture of the physics startup and the internet startup. While high-flying Silicon Valley execs are likely to see risk taking as something that defines them professionally if not personally, most of the physics entrepreneurs involved in the study see themselves as risk adverse -- as far apart from their internet cousins as oxford shirts are from hoodie sweats.

And unlike biotech startups, which tend to seek emerging markets by developing new drugs and devices to sell, many physics startups differ. Some do seek to sell new technologies to emerging markets but others specialize in improving existing technologies and adapting them for new uses based on a perceived market for those goods -- what the report terms "market pull" versus "technology push."

One factor that remained consistent across the United States was the negative response that entrepreneurs had to current immigration policies and the U.S. International Traffic in Arms Regulations, which startup founders saw as hostile to American high-tech competitiveness.

Funding is one of the two most critical challenges that entrepreneurs face -- the other being the technology itself. According to one participant in the study, the funding question is always the one and only topic entrepreneurs ever discuss when they get together at meetings. Venture capitalists have become much more risk averse over the past decade, and research intensive startups typically depend, at least initially, on federal Small Business Innovation Research grants — something that is much less common among Silicon Valley tech startups.

The report can be viewed online at http://www.aip.org/sites/default/files/history/files/HoPE-Report-2013-web.pdf. Print copies are available for free by emailing [email protected]

ABOUT AIPThe American Institute of Physics is an organization of scientific societies in the physical sciences, representing scientists, engineers, and educators. AIP offers authoritative information, services, and expertise in physics education and student programs, science communication, government relations, career services for science and engineering professionals, statistical research in physics employment and education, industrial outreach, and the history of physics and allied fields. AIP publishes Physics Today, the most influential and closely followed magazine of the physics community, and is also home to the Society of Physics Students and the Niels Bohr Library and Archives. AIP owns AIP Publishing LLC, a scholarly publisher in the physical and related sciences. www.aip.org