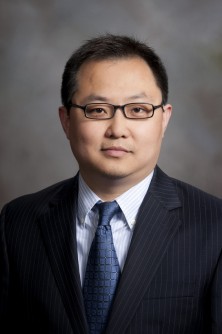 In his lab, Chang Lu of the chemical engineering department at Virginia Tech and his students develop small devices with micrometer features for examining molecular events inside cells.

Newswise — For more than a decade Chang Lu, associate professor of chemical engineering at Virginia Tech, has worked on the development of tools to efficiently analyze living cells. The long-term goal is to gain a better understanding of a range of diseases.

In his lab http://www.microfluidics.che.vt.edu/, Lu and his students develop small devices with micrometer features for examining molecular events inside cells. These devices promote high sensitivity and are particularly suited for studying a low number of cells.

Based on their record of achievements, the National Institutes of Health (NIH) has awarded Lu a new $1.3 million, four-year research project, commonly referred to as an RO1 grant, to continue his work in probing dynamics in protein-DNA interactions during disease development. His collaborators are Liwu Li, professor of biological sciences at Virginia Tech, and Kai Tan, associate professor of internal medicine of the University of Iowa Carver College of Medicine.

Lu’s earlier awards include a prestigious National Science Foundation CAREER Award and a Walter H. Coulter Early Career Award in Biomedical Engineering. He is also a core member of the School of Biomedical Engineering and Sciences, part of the Institute for Critical Technology and Applied Science at Virginia Tech.

Under the support of the new R01 grant, they will use live animal experiments with laboratory mice to understand the changes in the protein-DNA interaction as a disease develops, using tiny amounts of blood samples.

These blood samples are processed through Lu’s investigative procedure called chromatin immunoprecipitation (ChIP) to examine the protein binding to DNA sites. The unique aspect of Lu’s procedure is it produces reliable results based on as few as 10 to 100 cells as opposed to the previous standard that required as many as millions of cells, giving researchers a much more manageable process to use. The early versions of the work on this procedure were described in the journal, Lab on a Chip (http://pubs.rsc.org/en/content/articlelanding/2011/lc/c1lc20253g).

Lu’s group will then monitor the same live mouse over the course of the disease development.

“We believe that the single live animal data will grant unique insights into the molecular events involved in these biological processes and provide an important basis for diagnosis, prognosis, drug design and discovery, and treatment strategy. Such data also most closely mimic what occurs in human patients during disease development and treatment, thus offering direct clinical relevance,” Lu explained.

Lu’s specific technique (dubbed as microfluidic chromatin immunoprecipitation) is the subject of a patent filed by Virginia Tech Intellectual Properties (VTIP) on his behalf, and the group’s research appears in premier microfluidics and biomedical technology journals.

Lu earned his bachelor’s degree in chemistry at Peking University in 1998, followed by a master’s and a doctoral degree in chemical engineering in 2001 and in 2002, respectively, from the University of Illinois at Urbana-Champaign. He was a post-doctoral research fellow in applied physics at Cornell University from 2002 until 2004.

Lab on a Chip