Efforts to Help Bats Survive Deadly Disease Get a Boost 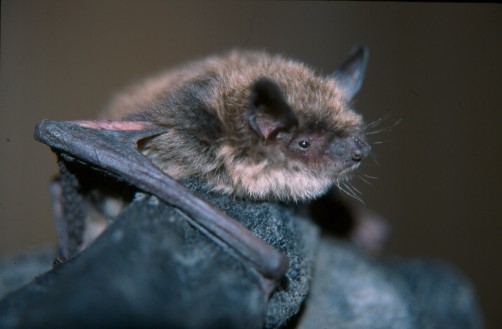 Newswise — Research efforts aimed at identifying bat species or individual populations that may be able to survive the arrival of deadly White-nose Syndrome (WNS) received a boost this week with the announcement of $100,000 (U.S.) in new funding for cross-border bat science.

WNS is a devastating fungal disease that has wiped out millions of bats in eastern North America, triggering what is thought to be the fastest decline of wild mammals in history. Beyond eastern North America, infected bats were discovered in Washington State in 2016, leading scientists to anticipate that the disease may soon spread widely across the western half of the continent, from New Mexico to Montana and further north, including British Columbia and Alberta.

With WNS on western Canada’s doorstep, researchers from the Wildlife Conservation Society Canada (WCS Canada) and the University of Winnipeg are amplifying their efforts to understand which bat species and populations are most vulnerable to the disease, and where populations may be able to ride out the arrival of WNS and form the basis for an eventual bat recovery.

To build a picture of factors that best determine bat survival, the scientists are looking at everything from the fat stores of bats in western North America to cave or hibernaculum conditions.

“Building our knowledge of which western bat species and populations are susceptible before WNS arrives is critical,” says Dr. Cori Lausen, Associate Conservation Scientist with WCS Canada. “This information can be used to target interventions and strengthen conservation approaches near identified refuges for populations anticipated to survive infection.”

With a vast area to cover and a large diversity of bat species, building a picture of current bat health and conservation needs across western North America is a major undertaking. WCS and its partners are grateful to receive additional funding from the U.S. Fish and Wildlife Service to extend an existing research effort to Canada to include continental-scale variation in bat ecology.

“This critical funding will help us better understand the key geographic differences in bat physiology and potential disease pathways, which will in turn, help us to develop regionally tailored responses and ongoing monitoring efforts,” explained Dr. Liam McGuire, the project’s lead physiologist at Texas Tech University.

Jeremy Coleman, National White-Nose Syndrome Coordinator at the U.S. Fish and Wildlife Service said, “As White-nose Syndrome spreads west, anticipating how western bats will respond to the disease is of utmost importance. The work by WCS and its partners will help determine where management efforts will be most needed and what actions will produce the greatest benefit to bats.”

This work is already being advanced across western North America by a multi-disciplinary scientific team that combines expertise in disease ecology, bat ecology, bat physiology, mathematical modeling, and landscape ecology. The effort on the U.S. side is being funded by the government’s Strategic Environmental Research and Development Program. In Canada, the project has received initial funding from the Alberta Conservation Association, BC Ministry of Forests Lands and Natural Resource Operations, and Waneta Terrestrial Compensation Program.

“Bats are hugely important to our economy. They are the leading consumer of nighttime insects and if populations plunge as they have in the east, we could see rising damage to crops and forests as insect populations increase in the absence of bats,” Ms. Yvonne Dzal, a researcher with the Bat Lab at the University of Winnipeg, who will be joining the team this fall, says.

“We still have a massive amount to learn about western bats and not a lot of time to do it,” says Dr. Sarah Olson, an Associate Director of Wildlife Health with WCS and principle investigator involved in the Canadian and American projects. “Every research and conservation dollar helps us get one step ahead in the race against WNS. The clock is ticking and we need to be better prepared for what could be a major ecological and economic disruption.”

This fall, the additional funding will support field work in Canada to collect baseline data to help predict which bats will survive WNS.

Bats are also the focus of a study being conducted by WCS’s Bronx Zoo in New York City to determine the species and behaviors of bats calling the City their home. Long-term monitoring of bats in New York City provides baseline data to draw upon if changes occur in species presence and provides insight on how bats in urban areas may respond to disease threats such as WNS.

About the WCS (Wildlife Conservation Society)

The Wildlife Conservation Society (WCS) is a US nonprofit, tax-exempt, private organization established in 1895 that saves wildlife and wild places worldwide through science, conservation action, education, and inspiring people to value nature. With long-term commitments in dozens of landscapes, presence in more than 60 nations, and experience helping to establish over 150 protected areas across the globe, WCS has amassed the biological knowledge, cultural understanding and partnerships to ensure that vibrant, wild places and wildlife thrive alongside local communities. WCS was the first conservation organization with a dedicated team of wildlife veterinarians and other health professionals deployed around the world. The WCS Wildlife Health Program focuses on problem-solving at the wildlife / domestic animal / human health and livelihoods interface, as underpinned by a foundation of environmental stewardship. Visit: newsroom.wcs.org Follow: @WCSNewsroom. For more information: 347-840-1242

Wildlife Conservation Society (WCS) Canada was incorporated as a conservation organization in Canada in 2004.  The mission of WCS Canada is to conserve wildlife and wild places by understanding the issues, developing science-based solutions, and working with others to carry out conservation actions across Canada. WCS Canada is distinguished from other environmental organizations through our role in generating science through field and applied research, and by using our results to encourage collaboration among scientific communities, organizations and policy makers to achieve conservation results.

About the University of Winnipeg

The University of Winnipeg hosts approximately 10,000 undergraduates on a dynamic campus and a downtown hub that connects people from diverse cultures and nurtures global citizens. We offer high-quality undergraduate and graduate programs including several that are unique in Western Canada, for example, a Bachelor of Arts in Human Rights, and a Master’s degree in Development Practice with a focus on Indigenous Development. Our graduates value their educational experience, and UWinnipeg consistently ranks highly in national surveys for overall reputation, small class sizes, academic excellence and commitment to the environment. The UWinnipeg Bat Lab, led by Dr. Craig Willis, has attracted over $2 million in research funding to help understand and fight WNS and has helped guide bat research and conservation since the disease was discovered in 2007.

Texas Tech University, located in Lubbock, Texas, is home to nearly 37,000 graduate and undergraduate students from throughout the United States and the world. It was established in 1923 and offers more than 150 degrees through 13 colleges and dozens of research-focused centers and institutes. Texas Tech, which is the only university in Texas to share its campus with a medical school and a law school, received designation as a National Research University from the State of Texas in 2012, and in 2016 the Carnegie Foundation named it a Tier One research institution.