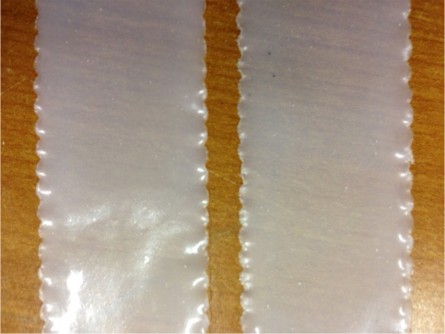 Adding eggshell nanoparticles to a bioplastic (shown above) increases the strength and flexibility of the material, potentially making it more attractive for use in the packaging industry.

A press conference on this topic will be held Tuesday, March 15, at 9 a.m. Pacific time in the San Diego Convention Center. Reporters may check-in at Room 16B (Mezzanine) in person, or watch live on YouTube http://bit.ly/ACSliveSanDiego. To ask questions online, sign in with a Google account.

SAN DIEGO, March 15, 2016 — Eggshells are both marvels and afterthoughts. Placed on end, they are as strong as the arches supporting ancient Roman aqueducts. Yet they readily crack in the middle, and once that happens, we discard them without a second thought. But now scientists report that adding tiny shards of eggshell to bioplastic could create a first-of-its-kind biodegradable packaging material that bends but does not easily break.

The researchers present their work today at the 251st National Meeting & Exposition of the American Chemical Society (ACS). ACS, the world's largest scientific society, is holding the meeting here through Thursday. It features more than 12,500 presentations on a wide range of science topics.

"We're breaking eggshells down into their most minute components and then infusing them into a special blend of bioplastics that we have developed," says Vijaya K. Rangari, Ph.D. "These nano-sized eggshell particles add strength to the material and make them far more flexible than other bioplastics on the market. We believe that these traits — along with its biodegradability in the soil — could make this eggshell bioplastic a very attractive alternative packaging material."

Worldwide, manufacturers produce about 300 million tons of plastic annually. Almost 99 percent of it is made with crude oil and other fossil fuels. Once it is discarded, petroleum-based plastics can last for centuries without breaking down. If burned, these plastics release carbon dioxide into the atmosphere, which can contribute to global climate change.

As an alternative, some manufacturers are producing bioplastics — a form of plastic derived from cornstarch, sweet potatoes or other renewable plant-based sources — that readily decompose or biodegrade once they are in the ground. However, most of these materials lack the strength and flexibility needed to work well in the packaging industry. And that's a problem since the vast majority of plastic is used to hold, wrap and encase products. So petroleum-based materials continue to dominate the market, particularly in grocery and other retail stores, where estimates suggest that up to a trillion plastic bags are distributed worldwide every year.

To find a solution, Rangari, graduate student Boniface Tiimob and colleagues at Tuskegee University experimented with various plastic polymers. Eventually, they latched onto a mixture of 70 percent polybutyrate adipate terephthalate (PBAT), a petroleum polymer, and 30 percent polylactic acid (PLA), a polymer derived from cornstarch. PBAT, unlike other oil-based plastic polymers, is designed to begin degrading as soon as three months after it is put into the soil.

This mixture had many of the traits that the researchers were looking for, but they wanted to further enhance the flexibility of the material. So they created nanoparticles made of eggshells. They chose eggshells, in part, because they are porous, lightweight and mainly composed of calcium carbonate, a natural compound that easily decays.

The shells were washed, ground up in polypropylene glycol and then exposed to ultrasonic waves that broke the shell fragments down into nanoparticles more than 350,000 times smaller than the diameter of a human hair. Then, in a laboratory study, they infused a small fraction of these particles, each shaped like a deck of cards, into the 70/30 mixture of PBAT and PLA. The researchers found that this addition made the mixture 700 percent more flexible than other bioplastic blends. They say this pliability could make it ideal for use in retail packaging, grocery bags and food containers — including egg cartons.

He acknowledges funding from the National Science Foundation (CREST#1137681, RISE#1459007) and the Alabama Experimental Program to Stimulate Competitive Research (ESPCoR#1158862).

The American Chemical Society is a nonprofit organization chartered by the U.S. Congress. With more than 158,000 members, ACS is the world's largest scientific society and a global leader in providing access to chemistry-related research through its multiple databases, peer-reviewed journals and scientific conferences. Its main offices are in Washington, D.C., and Columbus, Ohio.

The need for compostable alternative packaging materials is an urgent one, due to the inevitable demand in copious quantities by the increasing consumer population. Unfortunately, the mostly used polymeric materials (polypropylene and polyethylene) are recalcitrant to degradation, and contribute significantly to the concerning is of climate change. The demands for such materials have surged in commensurate proportions to match the increasing demand by growing global population. Worldwide yearly plastics production is estimated to exceed 300 million tons by 2015. Currently, the bioplastics market is surging up and capturing the plastics consumer market by a rate of 30 % annually. Hence, the development of compostable substitute plastics will immensely help in the replacement of their petroleum sourced counterparts, curtailing the complex issues related to environmental waste management and climate change. In this research, extruded compostable poly (butylene adipate-co-terephthalate) (PBAT)/agro-based polylactic acid (PLA) blend films were studied to select a suitable blend for further investigations. These blends (90/10, 80/20, 70/30, 60/40 and 50/50) were characterized using DSC, TGA, Raman spectroscopy, XRD, SEM and tensile testing. After this screening, the 70/30 blend was selected based on its desirable tensile properties and further studied by reinforcing with eggshell nanoparticles (> 30 nm by TEM analysis) engineered through mechanical attrition and ultrasound irradiation. Eggshell nanoparticles have shown great potential in tailoring of weak polymer properties toward their enhancement, at the same time the inherent egg proteins in the shells have the potential of acting as biocides (antibacterial agents) in the polymer matrix. DSC results revealed that the two polymers are immiscible, due to the presence of distinct melting points. Raman spectroscopy showed frequency vibrations and intensities unique to the individual polymers. Also, SEM microanalysis showed heterogeneous mixtures of the two matrixes with distinct phases. The tensile test showed that PLA led to improvement in tensile strength and modulus whiles PBAT significant led to enhancement in train-to-failure of the pristine blends systems. The inclusion of nano eggshell led to improvement in thermal stability, strain-to-failure and strain at maximum load of the 70/30 blend.