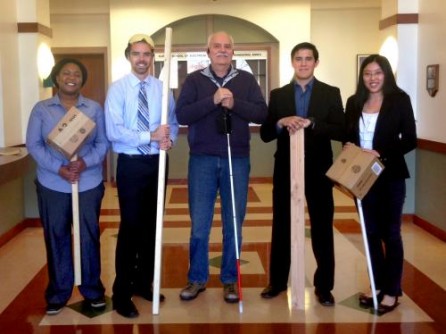 Newswise — Students in New Mexico State University’s Klipsch School of Electrical and Computer Engineering, in partnership with mechanical engineering students, worked throughout the previous school year to improve the white cane, a device that visually impaired persons use to become more aware of their surroundings, as part of their capstone course.

Students redesigned some of the main components to fit the personal needs of customer Terry Kebbel, an advocate for the blind who lost his sight as an adult due to a medical issue.

Led by capstone coordinator Robert Hull, project consultant Bernie McCune and faculty adviser Krist Petersen, the project focused on finding solutions for protecting users by reaching areas not currently covered by the cane’s trajectory, such as right above the user’s head and to the immediate left and right of the user. Another issue the group addressed was the cane’s inability to detect elevation changes.

Students attached sensors to the cane to create a cost effective personal frontal sensory shield, which transmits information wirelessly to alert users of potentially harmful objects in their way through a feedback device. This invisible shield accounts for all the areas previously neglected by the white cane design. The PFSS contains sensors which send information through a Bluetooth transmitter that sends audio signals to Bluetooth headphones.

“The intelligent white cane has two design features: a personal frontal shield and improved mechanical design,” said Kebbel. “The personal frontal shield will identify obstacles at four locations, left shoulder, right shoulder, head and drop in elevation. It will also provide a distance sensor for identifying objects. On the mechanical design, the cane will have improved balance, ergonomic grip and improved tactile feedback from the tip.”

“This project was interesting in that we collaborated with mechanical engineering students also, and they worked on the 3D design and modeling on both an improved handle and an improved tip for the cane. Also, the material of the cane,” said Hull.

“We’re trying to miniaturize everything and come up with a form that’s more integrated into the cane and continue to improve the circuitry and the operation, but the demonstration on this works well,” said Hull. “We’re just trying to get everything smaller and smaller. The sensors are a current problem. They’re pretty large.”

The student-created prototype features a laminated bamboo shaft that is easy to work with and affordable and a sharp cone shaped tip with less surface area for easier surface gliding. The current design is missing the final sensor encasement and a suitable grip for the handle, as it requires customization. Other aspects that need to be pursued further are the folding cane connector length and researching the user fatigue aspect of the project.

“We’re hoping that we can get a prototype that’s to the point where you want to show it off and demonstrate it, and then, if it looks like it’s worth pursuing, move it into production,” said Hull.

“Once completely developed, it will improve the white cane traveler’s ability to recognize an obstacle before contact,” said Kebbel. “In addition, the overall features will reduce mental stress and body fatigue during travel.”