Electrical Signatures of Consciousness in the Dying Brain

A University of Michigan animal study shows high electrical activity in the brain after clinical death. 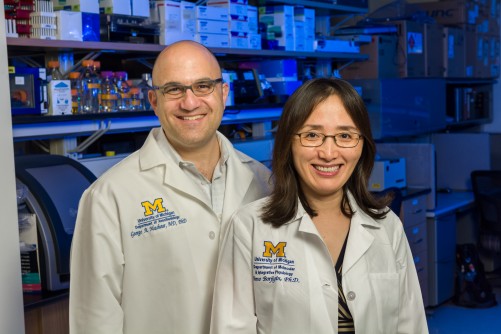 Newswise — ANN ARBOR, Mich. -- The near-death experience reported by cardiac arrest survivors worldwide may be grounded in science, according to research at the University of Michigan Health System.

Whether and how the dying brain is capable of generating conscious activity has been vigorously debated.

But in this week’s PNAS Early Edition, a U-M study showed shortly after clinical death, in which the heart stops beating and blood stops flowing to the brain, rats display brain activity patterns characteristic of conscious perception.

“This study, performed in animals, is the first dealing with what happens to the neurophysiological state of the dying brain,” says lead study author Jimo Borjigin, Ph.D., associate professor of molecular and integrative physiology and associate professor of neurology at the University of Michigan Medical School.

“It will form the foundation for future human studies investigating mental experiences occurring in the dying brain, including seeing light during cardiac arrest,” she says.

Approximately 20 percent of cardiac arrest survivors report having had a near-death experience during clinical death. These visions and perceptions have been called “realer than real,” according to previous research, but it remains unclear whether the brain is capable of such activity after cardiac arrest.

“We reasoned that if near-death experience stems from brain activity, neural correlates of consciousness should be identifiable in humans or animals even after the cessation of cerebral blood flow,” she says.

Within the first 30 seconds after cardiac arrest, all of the rats displayed a widespread, transient surge of highly synchronized brain activity that had features associated with a highly aroused brain.

“The prediction that we would find some signs of conscious activity in the brain during cardiac arrest was confirmed with the data,” says Borjigin, who conceived the idea for the project in 2007 with study co-author neurologist Michael M. Wang, M.D., Ph.D., associate professor of neurology and associate professor of molecular and integrative physiology at the U-M.

“But, we were surprised by the high levels of activity,” adds study senior author anesthesiologist George Mashour, M.D., Ph.D., assistant professor of anesthesiology and neurosurgery at the U-M. “ In fact, at near-death, many known electrical signatures of consciousness exceeded levels found in the waking state, suggesting that the brain is capable of well-organized electrical activity during the early stage of clinical death.”

The current study resulted from collaboration between the labs of Borjigin and Mashour, with U-M physicist UnCheol Lee, Ph.D., playing a critical role in analysis.

“This study tells us that reduction of oxygen or both oxygen and glucose during cardiac arrest can stimulate brain activity that is characteristic of conscious processing,” says Borjigin. “It also provides the first scientific framework for the near-death experiences reported by many cardiac arrest survivors.”

Funding: The work of George Mashour, M.D., Ph.D., was supported by National Institutes of Health Grant GM098578 and the James S. McDonnell Foundation.