Electronics Get a Power Boost with the Addition of Simple Material

Newswise — The tiny transistor is the heart of the electronics revolution, and Penn State materials scientists have just discovered a way to give the workhorse transistor a big boost, using a new technique to incorporate vanadium oxide, one of a family of materials called functional oxides, into the device. “It’s tough to replace the current transistor technology, because semiconductors do such a fantastic job,” said Roman Engel-Herbert, assistant professor of materials science and engineering. “But there are some materials, like vanadium oxide, that you can add to existing devices to make them perform even better.”

The researchers knew that vanadium dioxide, which is just a specific combination of the elements vanadium and oxygen, had an unusual property called the metal-to-insulator transition. In the metal state, electrons move freely, while in the insulator state, electrons cannot flow. This on/off transition, inherent to vanadium dioxide, is also the basis of computer logic and memory.

The researchers had the idea that if they could add vanadium oxide close to the transistor it could boost the transistor’s performance. Likewise, by adding it to the memory cell, it could improve the stability and energy efficiency to read, write and maintain the information state. The major challenge they faced was that vanadium dioxide of sufficiently high quality had never been grown in a thin film form on the scale required to be of use to industry, the so-called wafer scale. Although vanadium dioxide, the targeted compound, looks simple, it is very difficult to synthesize. In order to create a sharp metal-to-insulator transition, the ratio of vanadium to oxygen needs to be precisely controlled. When the ratio is exactly right, the material will show a more than four-order-of-magnitude change in resistance, enough for a sufficiently strong on/off response.

In a paper in the online journal Nature Communications, the Penn State team reports for the first time the growth of thin films of vanadium dioxide on 3-inch sapphire wafers with a perfect 1:2 ratio of vanadium to oxygen across the entire wafer. The material can be used to make hybrid field effect transistors, called hyper-FETs, which could lead to more energy efficient transistors. In a paper published earlier this year, also in Nature Communications ( www.dx.doi.org/10.1038/ncomms8812), the research group led by Prof. Suman Datta at Penn State showed that the addition of vanadium dioxide provided steep and reversible switching at room temperature, reducing the effects of self-heating and lowering the energy requirements of the transistor. But there is more. The implementation of vanadium dioxide can also benefit existing memory technologies, a quest that Penn State researchers are actively pursuing.

“The metal-to-insulator property of vanadium dioxide can ideally enhance state-of-the-art non-volatile memories by using it as an augmentation device, which, interestingly, can also serve as a selector in some memory architecture,” said Sumeet Gupta, Monkowski assistant professor of electrical engineering and group leader of the Integrated Circuits and Devices Lab at Penn State. A selector insures that reading or writing information on a memory chip is done within a single memory cell, without bleeding over into neighboring cells. The selector works by changing the resistivity of the cell, which vanadium dioxide does extremely well. In addition, the change in resistivity of vanadium oxide can be used to significantly increase the robustness of the read operation.

The current paper’s lead author, Hai-Tian Zhang, a PhD student in Engel-Herbert’s group, said, “To determine the right ratio of vanadium to oxygen, we applied an unconventional approach in which we simultaneously deposit vanadium oxide with varying vanadium-to-oxygen ratios across the sapphire wafer. Using this ‘library’ of vanadium-to-oxygen ratios, we can perform flux calculations to determine the optimal combination that would give an ideal 1:2 vanadium/oxygen ratio in the film. This new method will allow a rapid identification of the optimal growth condition for industrial applications, avoiding a long and tedious series of trial-and-error experiments.”

The vanadium dioxide thin film material grown with this method has also been used to make super high frequency switches, in collaboration with the Datta group at Penn State and Notre Dame, a technology important in communications. These switches show cut-off frequencies an order of magnitude higher than conventional devices. This work will be reported at the IEEE International Electron Device Meeting, the leading forum for reporting technological breakthroughs in the semiconductor and electronic device industry, in December.

“We are starting to realize that the class of materials exhibiting these on/off responses can be beneficial in various ways in information technology, such as increasing the robustness and energy efficiency of read/write and compute operations in memory, logic and communication devices,” Engel-Herbert said. “When you can make high quality vanadium dioxide on a wafer scale, people are going to have many excellent ideas on how it can be used.”

The work was supported by the National Science Foundation and the Penn State Center for Nanoscale Science. Analysis and measurement was performed in the Penn State Materials Characterization Laboratory, a facility of the Materials Research Institute.Contact Roman Engel-Herbert at [email protected]. 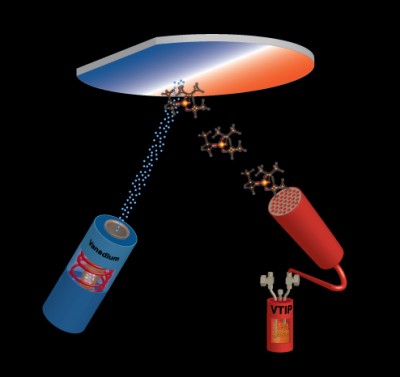 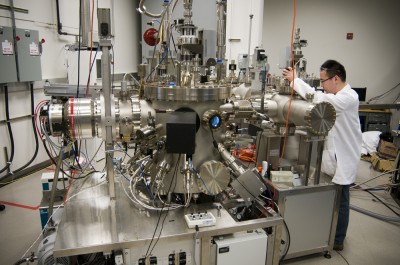