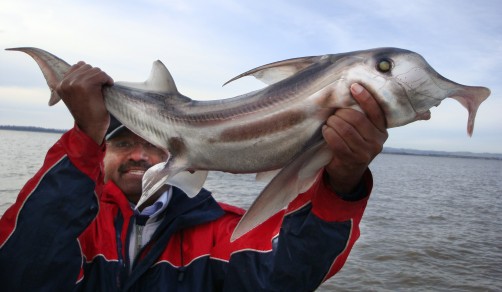 Byrappa Venkatesh, PhD, holds an elephant shark, one of the world's oldest-living jawed vertebrates. Sequencing its genome offers new clues to why the skeleton of this fish is made of cartilage rather than bone and how the immune system evolved in higher organisms.

Newswise — An international team of researchers has sequenced the genome of the elephant shark, a curious-looking fish with a snout that resembles the end of an elephantâ€™s trunk.

The elephant shark and its cousins the sharks, rays, skates and chimaeras are the worldâ€™s oldest-living jawed vertebrates. But their skeletons are made of cartilage rather than bone, making this group of vertebrates an oddity on the evolutionary tree.

Now, by comparing the genome of the elephant shark with human and other vertebrate genomes, researchers at Washington University School of Medicine in St. Louis and elsewhere have discovered why the skeleton of sharks is cartilaginous. An analysis of the creatureâ€™s genome, published Jan. 9 in the journal Nature, offers new insights into the genetic basis of bone formation and the molecular origins of adaptive immunity, which provides organisms with a more sophisticated immune response to pathogens.

Collectively, the findings have important implications for understanding bone diseases such as osteoporosis and for developing more effective therapies to treat these conditions. Findings related to the elephant sharkâ€™s immune system provide new opportunities for studying adaptive immunity in humans and for formulating new strategies to fine-tune the immune response.

â€śWe now have the genetic blueprint of a species that is considered a critical outlier for understanding the evolution and diversity of bony vertebrates, including humans,â€ť said senior author Wesley Warren, PhD, research associate professor of genetics at The Genome Institute at Washington University School of Medicine. â€śAlthough cartilaginous vertebrates and bony vertebrates diverged about 450 million years ago, with the elephant shark genome in hand, we can begin to identify key genetic adaptations in the evolutionary tree.â€ť

Among the cartilaginous fishes, the elephant shark was selected for sequencing because of its compact genome, which is one-third the size of the human genome. The fish lives in the waters off the southern coast of Australia and New Zealand, at depths of 200 to 500 meters, and uses its snout to dig for crustaceans at the bottom of the ocean floor.

By analyzing the elephant shark genome and comparing it with other genomes, the scientists discovered a family of genes that is absent in the elephant shark but present in all bony vertebrates, including the chicken, cow, mouse and human. When the researchers deleted a member of this gene family in zebrafish, they observed a reduction in bone formation, highlighting the gene familyâ€™s significance in making bone.

In a surprise finding, the team found that the elephant shark appears to lack special types of immune cells that are essential to mounting a defense against viral and bacterial infections and for preventing autoimmune diseases such as diabetes and rheumatoid arthritis.

However, despite possessing a relatively rudimentary immune system, sharks exhibit robust immune responses and live long lives. The new discovery opens up the possibility of developing new strategies to shape the immune response in humans.

The researchers also determined that the elephant shark genome is the slowest-evolving among all vertebrates, including the coelacanth, a prehistoric fish popularly known as a â€śliving fossil.â€ť

Furthermore, large chunks of elephant shark and human chromosomes were found to be highly similar, whereas the corresponding regions in fishes such as zebrafish and pufferfish were fragmented and scattered on different chromosomes. The markedly slow-evolving feature of the elephant shark genome further underscores its importance as a reference genome for studies aimed at better understanding the human genome.

â€śThe slow-evolving genome of the elephant shark is probably the best proxy for the ancestor of all jawed vertebrates that became extinct a long time ago,â€ť said lead author Byrappa Venkatesh, PhD, research director at the Institute of Molecular and Cell Biology at the Agency for Science, Technology and Research (A*STAR), in Singapore. â€śIt is a cornerstone for improving our understanding of the development and physiology of human and other vertebrates as illustrated by our analysis of the skeletal system and immune system genes.â€ť