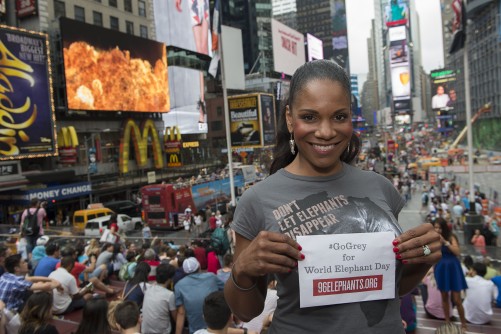 96,000 messages will be sent to public officials from more than 118 zoos around the U.S.

Public is urged to “GO GREY” for elephants

WCS’s Bronx Zoo is part of a nationwide coalition of zoos throughout the U.S. that will send some 96,000 messages to U.S. public officials in support of a ban on the sale of ivory. Messages will be delivered by zoos in time for World Elephant Day. One hundred and eighteen North American zoos are partners of 96 Elephants, which is focused on securing a moratorium on the sale of ivory in the U.S.; bolstering protection of African elephants; and educating the public about the link between ivory consumption and the elephant poaching crisis.

State ivory bans have recently passed in New York and New Jersey and are awaiting signatures from their respective governors. Earlier this year, the Obama Administration proposed a sweeping federal ivory ban, which was a major accomplishment. This action is currently under fire in Congress from anti-ivory ban groups and it is important that lawmakers are reminded that a ban is needed to allow the species to recover.

On World Elephant Day, supporters will be asked to “Go Grey” by wearing a grey ribbon available at WCS’s Bronx Zoo or simply wearing something grey. Participants can then take “elphies” with their Go Grey ribbons or hold signs of support and post images on social media using the hashtag #GoGrey. Several celebrities have already posted elphies including Alyssa Milano and Audra McDonald.

In addition, 96 Elephants is organizing a “Thunderclap” where people can sign up on Twitter for a simultaneous Tweet on World Elephant Day. During the day, @TheWCS and @96Elephants will tweet out 96 facts about elephants (one every 15 minutes). To learn more about 96 Elephants and World Elephant Day, visit: http://96elephants.org/wed/

Said John Calvelli, WCS Executive Vice President for Public Affairs and Director of the 96 Elephants Campaign: “While there have been tremendous strides over the past year in raising awareness about the elephant crisis, clearly much more needs to be done, which is why we are urging the public to take action to commemorate World Elephant Day. By wearing grey or displaying a grey ribbon on Tuesday, August 12 and sending a message to your legislators, we can help raise awareness and be a voice for these majestic creatures. We need to make every day World Elephant Day.”

Through a partnership with Horizon Media, electronic billboards will go live on World Elephant Day at two locations in Times Square: ABC Supersign on 44th Street and Broadway and Clear Channel Spectacolor on Broadway between 46th and 47th streets. The billboards will feature a short video: http://youtu.be/1FinUkU9WBU

DoSomething.org, an organization of 2.5 million young people working for social change, will launch “Justice for Elephants Campaign” on World Elephant Day asking young adults to create messages with cut out elephant tusks and send them in batches of 96 to U.S. officials asking them to support the U.S. ivory ban.

The Hard Rock Cafe has partnered with 96 Elephants and has created a collectable series of 96 Elephants pins for World Elephant Day with a portion of the proceeds benefitting the campaign to stop the slaughter of elephants for their ivory. In 43 cities across the country, Hard Rock Café is selling the pin and providing their guests a chance to participate in the campaign and be a voice for elephants.

96 Elephants was named for the number of elephants gunned down each day for their ivory. The Wildlife Conservation Society launched the campaign in September in support of the Clinton Global Initiative’s (CGI) commitment to end the crisis facing Africa’s elephants.

The 96 Elephants campaign:• Bolsters elephant protection in the wild by increasing support for park guards, intelligence networks, and government operations in the last great protected areas for elephants throughout the Congo Basin and East Africa. (WCS recently launched elephant protection programs in four new target sites: Ivindo National Park in Gabon; Okapi Faunal Reserve in the Democratic Republic of Congo; Ruaha and Katavi National Parks in Tanzania; and Niassa National Reserve in Mozambique. In these four sites alone, 44,000 elephants are at immediate risk.)

• Funds high-tech tools in the field ranging from drones and sophisticated remote cameras that track poachers in real-time, to specially trained sniffer dogs to find smuggled ivory in ports and trading hubs.

• Engages the public through a series of actions including online petitions and letter writing campaigns enhanced through social media to support U.S. and state moratoria, increase funding, and spread the word about demand and consumption of ivory. 96 Elephants will educate public audiences about the link between the purchase of ivory products and the elephant poaching crisis, and support global moratoria and other policies that protect elephants.

To learn more about the elephant crisis and how to help eradicate the demand for ivory, visit www.96elephants.org.