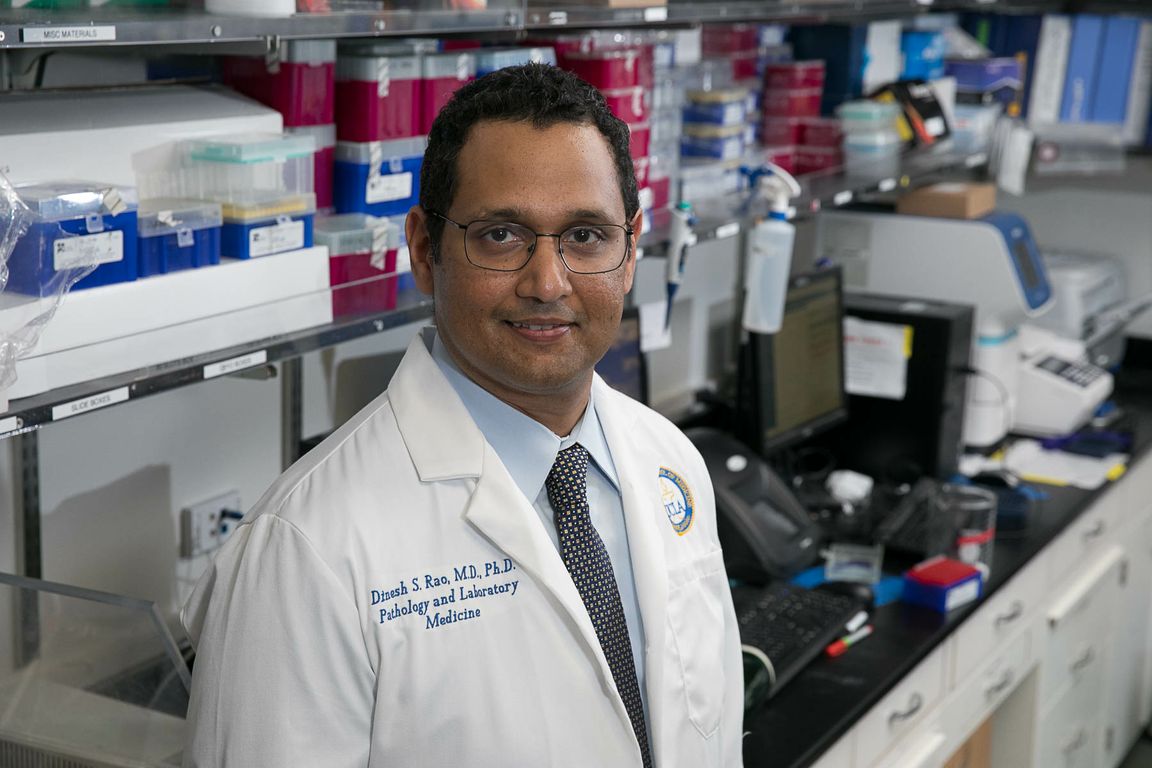 senior author Dr. Dinesh Rao, a member of the Jonsson Cancer Center and an associate professor of pathology and laboratory medicine at the David Geffen School of Medicine at UCLA.

Newswise — LOS ANGELES – Removing a protein that is often overexpressed in a rare and aggressive subtype of leukemia can help to slow the cancer’s development and significantly increase the likelihood of survival, according to a study in mice led by scientists at the UCLA Jonsson Comprehensive Cancer Center.

The research, published in the journal Leukemia, could aid in the development of targeted therapies for cancers that have high levels of the RNA-binding protein IGF2BP3 — especially acute lymphoblastic and myeloid leukemias that are characterized by chromosomal rearrangements in the mixed lineage leukemia (MLL) gene.

In these MLL-rearranged leukemias, IGF2BP3 attaches to certain RNA molecules that carry genetic instructions for cancer-related proteins, markedly amplifying cancer development. Children and adults diagnosed with this subtype have a poor prognosis and a high risk of relapse after treatment.

“This type of leukemia is more aggressive because of its ability to divide and spread faster,” said senior author Dr. Dinesh Rao, a member of the Jonsson Cancer Center and an associate professor of pathology and laboratory medicine at the David Geffen School of Medicine at UCLA. “The disease can be very difficult to treat, even with new targeted immunotherapies like CAR T cell therapy and blinatumomab.”

Leukemia begins in the bone marrow and is spurred by genetic mutations that cause stem cells in the marrow to produce too many white blood cells, affecting the body’s ability to fight infection. Rao and his team had earlier identified IGF2BP3 as a factor in driving the development of leukemia — particularly the MLL-rearranged subtype — by regulating various RNA messages that contribute to the disease.

Taking this into account, the researchers wondered whether removing the IGF2BP3 protein might stop the proliferation of leukemia cells. To answer the question, Rao and his team used the powerful gene-editing tool known as CRISPR-Cas9 to remove IGF2BP3 from both MLL-leukemic mice and cell lines. The effects on survival, they found, were striking.

Of the leukemic mice that had IGF2BP3 deleted, approximately 75% had an increase in overall survival, and 50% were leukemia-free. The team also observed an average fourfold reduction in the mice’s tumor burden — the total mass of tumor tissue in the body — after IGF2BP3 removal, as measured by the weight of their spleens.

“These results really highlight IGF2BP3 as an attractive and valuable therapeutic target,” said lead author Tiffany Tran, a graduate student researcher in UCLA’s molecular, cellular and integrative physiology interdepartmental doctoral program. “By targeting this RNA-binding protein, we would be able to target the cancer cells directly and leave the healthy, non-cancerous cells alone.”

In targeting IGF2BP3, the team also discovered that the protein was not necessary for normal blood development in mice; the blood system appeared mostly intact when the protein was removed. Even mice that were completely deficient of the protein developed normally.

“This was surprising to us because a lot of proteins that are important in cancer are also important in normal tissues,” said Rao, who is also a member of the UCLA Eli and Edythe Broad Center of Regenerative Medicine and Stem Cell Research.

“This is also an attractive target because we have made some real advances in understanding how it works in the cancer cells,” Rao added. “We were able to pinpoint some important RNA molecules that it binds to, which encode other cancer-causing proteins. So if you can remove this protein, you’re able to modify the amount of other cancer-causing proteins.

While the team studied IGF2BP3 as a target in MLL leukemias, the protein is also highly expressed in about 15% to 20% of other cancer types, including glioblastoma, pancreatic cancer, lung cancer and melanoma.

The next step for researchers is to understand whether the removal of the protein has as strong of an effect against other types of cancer, as well as to develop small-molecule and RNA-based therapeutics to try to interfere with the function of the protein.

The work was supported in part by the National Institutes of Health.