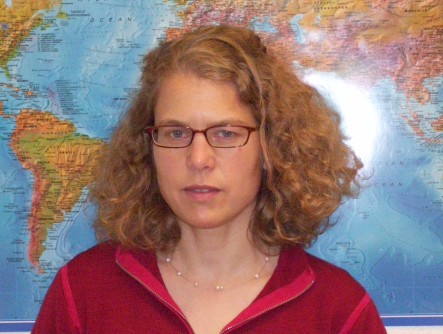 Newswise — University of Chicago climate scientist Elisabeth Moyer will offer her insights regarding the multiple threats that climate change poses to national security during a panel discussion starting at 6 p.m. Wednesday, April 30, at Northwestern University’s downtown campus. Moyer also will appear on a segment of WTTW’s Chicago Tonight, airing at 7 p.m. on Tuesday, April 29, on PBS, addressing the same topic.

The panel discussion will take place at Northwestern’s Robert H. Lurie Medical Research Center, Hughes Auditorium, 303 E. Superior, in Chicago. Registration and social hour begin at 5 p.m. Admission is free for members of the Chicago Council on Science & Technology, $5 for students, $10 for faculty and staff members of UChicago and other C2ST-affiliated institutions and $20 for the general public. The event also will be live-streamed on the C2ST web site.

Moyer is an assistant professor in geophysical sciences and co-director of the multi-institutional Center for Robust Decision Making on Climate and Energy Policy. She will provide a Midwest perspective to the discussion on climate security, a topic that has brought environmentalists and military leaders into unique accord. Both groups agree that something must be done to mitigate the effects of climate change on food scarcity, fresh water, gross domestic product, trade routes and mass migrations.

The American Security Project is a non-partisan think tank in Washington, D.C., which focuses on climate change through the lens of national and global security. Made up of a diverse group of CEOs, former members of congress, retired military generals and other prominent officials, the organization was founded by Sen. Hagel and Secretary of State John Kerry while he was in the Senate.

C2ST is a non-profit, membership-based organization that brings researchers and scientists out of the lab and directly before the public. The organization works with national laboratories, leading academic institutions and museums to educate the public on issues of critical importance.