Elucidating the Law of Vortex Diffusion in Quantum Turbulence 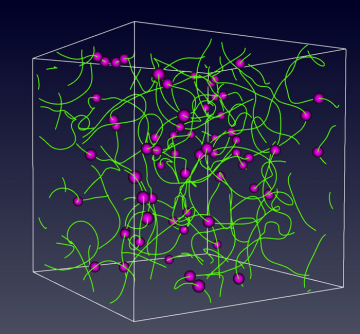 Newswise — A research group of Professor Makoto Tsubota and Specially Appointed Assistant Professor Satoshi Yui, both from the Graduate School of Science and the Nambu Yoichiro Institute of Theoretical and Experimental Physics, Osaka Metropolitan University, in cooperation with their colleagues from Florida State University and Keio University, conducted a systematic numerical study of vortex diffusion in quantum turbulence in superfluid helium-4 (He II) at extremely low temperatures, near absolute zero (−273°C), and compared the results with experimental observations.

The research team used a computer simulation to study quantum turbulence in superfluid helium-4. They inserted particles that followed tangles, which are hairball-like quantum, and analyzed the particles’ trajectory.

The systematic numerical study revealed that vortices first underwent “superdiffusion,” spreading quickly over a short time period, and then transitioned to “normal diffusion” over a longer time period. This transition is thought to be due to the reconnection of vortices when they encounter each other.

Furthermore, simulations over a wide range of temperatures, from absolute zero to roughly 2 K (equal to −271°C), showed insignificant changes in the “superdiffusion” index. This indicates a robust law of “superdiffusion” that is not heavily dependent on parameters such as temperature.

“In this study, we investigated the diffusion of particles in a quantum fluid at cryogenic temperatures and found that the transition from ‘superdiffusion’ to ‘normal diffusion’ depends on the time,” concluded Professor Tsubota. “This law may provide a new way to understand complex quantum turbulence.”