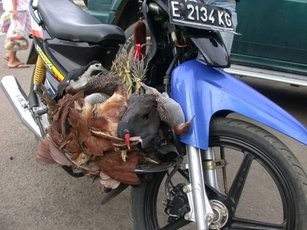 Wild and domestic birds are often found together in wild markets, and on the way to markets as well, as in this photo. Such commingling of species in markets gives avian influenza and other pathogens a chance to mutate and spread.

Newswise — Instead of attacking wild birds for our new disease problems, a far more cost effective approach should focus on keeping wild animals separate in the places where they often commingle: in wildlife markets and international trade, according to wildlife health experts from the Wildlife Conservation Society (WCS) and the United Nations' Food and Agriculture Organization (FAO) in a recent issue of the prestigious Journal of Wildlife Diseases.

"This is an ounce of prevention that we really need to use in trading hubs where human commerce of wild animals allows for the spread of diseases," said Dr. William Karesh, director of the Wildlife Conservation Society's Field Veterinary Program and lead author of the peer-reviewed paper titled 'Implications of wildlife trade on the movement of avian influenza and other infectious diseases.' "The wildlife trade, and markets in particular, serve as very dirty mixing bowls for diseases. We can significantly reduce the threat of avian flu and other emerging diseases by decreasing contact among different animal species in markets and thus giving pathogens fewer opportunities to mutate and spread."

In the paper, Karesh and his co-authors point out birds and other animals moving through wildlife markets give pathogens a chance to jump into new species and geographic regions via the global trade in wildlife. For example, two instances of highly pathogenic avian influenza traveling vast distances in bird hosts include two mountain hawk eagles that were illegally smuggled from Thailand to Belgium and wild songbirds shipped from Taiwan to the United Kingdom. Besides direct health effects, disease outbreaks damage regional and global economies by destabilizing trade. Disease outbreaks such as SARS, Nipah virus and others are thought to have cost some $80 billion in economic damage. Efforts to control avian influenza, such as a culling of 140 million chickens in Asia entailed a significant cost and in developing countries, a terrible loss of food and income for families dependent on those animals.

Some of these impacts could be greatly reduced by directing attention to wildlife markets and trade where many pathogenic problems originate. Preventing the spread of pathogens among animal species will require either banning trade or extending the current regulatory frameworks used in the trade in domestic animals to the wildlife trade, which largely lacks regulations and monitoring in many countries. Control strategies at these trade hubs would include:

"¢ Strengthening and enforcing of disease-control and trade regulations"¢ Developing and implementing quarantine procedures"¢ Shifting the costs of controlling outbreaks to the animal suppliers and vendors"¢ Ending trade that is unsustainable.

"Preventing the spread of the next potential pandemic could depend on closing the valves through which pathogens currently flow," said Martin Gilbert, a WCS veterinarian currently studying diseases in wildlife markets in Asia. "There is a sound basis for the tight restrictions on trade of livestock and sadly, those concepts have not been recognized for wildlife."

The Wildlife Conservation Society currently heads the Global Avian Influenza Network for Surveillance of wild birds (GAINS) which operates around the world in an effort to detect avian influenza, including the highly pathogenic form of the virus, in wild migratory and resident bird populations, and to guide domestic and global preparedness against this and other pathogens.

The paper is one of several on avian influenza in a supplement edition of the Journal of Wildlife Diseases, a prestigious peer-reviewed publication sharing original research and critical findings on a wide range of health issues affecting wildlife, domestic animals, and people. Earlier this year, the journal's publisher, the Wildlife Disease Association (WDA), with the support of the Wildlife Conservation Society, granted free online access to more than 40 years of the journal's articles to 112 developing countries around the world.