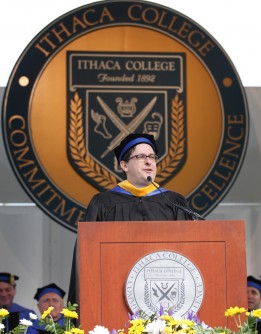 Newswise — ITHACA, NY — Leaning more on the wit that helped him earn five Emmy Awards than the customary wisdom given to graduating seniors, comedic television writer Chris Regan suggested in his Ithaca College Commencement address that one of the most important things they could do in their lives is to try to make people laugh.

“If you can’t do that, find space in your life for something that makes you laugh. Greet the many challenges that this world is going to offer you with passion and courage and conviction, yes, but also with some degree of levity.”

Currently a contributor to Fox Television’s “Family Guy,” Regan served from 1999 to 2006 on the writing staff of “The Daily Show with Jon Stewart.” Himself a 1989 Ithaca alumnus, he told the 1,345 graduates taking part in the Sunday morning ceremony in Butterfield Stadium that he has no doubt the college has taught them well.

“College teaches you many things. This one has taught you guys how to operate a camera, run a business, tell a story, how to help someone overcome a disability, how to lead an orchestra, how to teach others what you’ve learned. But I think the most important thing any college or university teaches you — is who you are.”

Regan pointed out to the graduates that they have the two greatest gifts possible — a college degree, and time — and advised them to fill that time with “as much good stuff as you can.”

He declined to offer the traditional challenge to the newly degreed to “go forth boldy,” saying the world itself offers enough challenges. “That is what the world does. The world is kind of a jerk that way.”

After noting that a United Nations study of world happiness ranked the United States in 17th place, right behind Mexico, Regan marveled at how a nation that invented the La-Z-Boy, Hula Hoop and Hot Pocket could be losing “the fun race.”

“And at the end of your big long life, what will you have to show for all this? From these efforts in making this world a little happier? You’ll have a lot more friends... And maybe, just maybe, we will all have a happier country to live in. Maybe not Denmark happy, but I’m sure we can get up to Mexico!”

In his remarks, Ithaca College president Tom Rochon reminded the graduates of his Convocation address to them as freshmen four years ago. In that speech, he discussed Plato’s allegory of the cave, in which people are chained in the dark and can only see shadows cast by firelight on the wall in front of them.

“I suggested at your Convocation that your educational experience at IC would be, if fully successful, like the experience of being unchained in Plato’s cave. I said that if you are going to get everything possible out of your time as a student here, then you must bring with you the spirit of a fearless explorer, willing to go not just where others tell you to go but instead where your own path takes you. You would need to have a spirit of risk taking, of intellectual adventurousness, of being willing to expand your boundaries of sight and knowledge, of being willing to exit the cave and look at the sun.”

Rochon updated the metaphor with some advice that Ithaca College alumnus Bob Iger — chairman and CEO of the Walt Disney Company — recently gave to members of the college’s board of trustees. Iger told that gathering that the job of a CEO boils down to three main tasks, with Rochon translating that message into what each of us must do in order to be the CEO of our own life.

“We must each define who we are and what our mission in life will be. We must each develop our strategy for how we will achieve the goals we have set for ourselves. And we must each decide for ourselves what the standards of performance will be; what level of accomplishment are we aiming for.

The proceedings also included remarks by senior class president Erin Smith, who said that when she arrived at college she naively thought she would leave four years later exactly the same person, only with a degree. But because of the conversations and experiences she has shared with her classmates on a multitude of topics, she now knows how much she has changed, and how much they will all continue to change after graduation.

“We have accomplished so much, as the Class of 2014,” said Smith. “These past few years you have won awards and honors, you’ve excelled and you have made great friends. And whatever you do after you leave this field, I am hopeful that each and every one of you will continue to create environments where those conversations can keep sparking, and people can keep thinking, and challenging, and changing.”