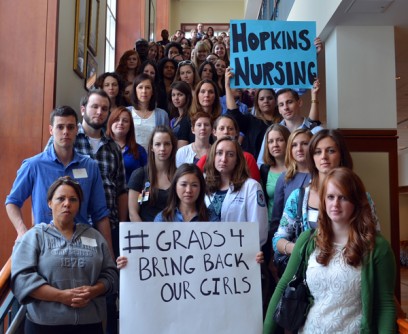 Students at the Johns Hopkins School of Nursing

Newswise — The Johns Hopkins School of Nursing is lending support to the Bring Back Our Girls Movement, a social media campaign to sway public opinion against the radical kidnappers of nearly 300 Nigerian schoolgirls, focus international attention on the act of terrorism, and perhaps save the missing girls and others like them.

This week, new students, current students, and graduates of the School of Nursing (JHSON) shared their concern and their empathy over the fate of the girls, kidnapped in April by the terrorist group Boko Haram, which wants to ban the education of females.

“Here we are, we’ve been so busy with our final exams. And that’s all they wanted. They were there to take their final exams [when kidnappers arrived],” said student leader Emily Dawes of the JHSON Accelerated Class of 2014. (JHSON’s student ranks remain predominantly female, its most gender-diverse class reaching 13 percent male.) “Everyone deserves an education.”

The JHSON effort, which includes a Facebook page (https://www.facebook.com/Grads4BringBackOurGirls), a Tumblr presence, and Twitter dispatches (using the hashtag #Grads4BringBackOurGirls), joins a vocal outpouring that has become a shout in recent weeks. With word that Boko Haram has considered freeing some of the girls--perhaps a sign that the message is being heard--the volume is sure to keep increasing.

Dean Patricia M. Davidson, PhD, MEd, RN, applauded the idea of nurses making their voices heard on Bring Back Our Girls and other social issues. "Once again, we are taking a compassionate and leading role in improving the health and well-being of communities worldwide."

What You Can Do