Employee Volunteerism? Only if You Think Your Boss is Ethical 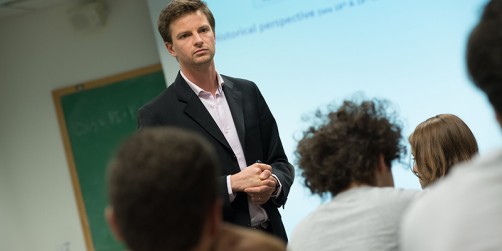 Newswise — A new study shows that people who perceive their employer as committed to environmental and community-based causes will, in turn, engage in green behavior and local volunteerism, with one caveat: their boss must display similarly ethical behavior.

The forthcoming study in the Journal of Business Ethics by Kenneth De Roeck, assistant professor at the University of Vermont, and Omer Farooq of UAE University, shows that people who work for socially and environmentally responsible companies tend to identify more strongly with their employer, and as a result, increase their engagement in green and socially responsible behaviors like community volunteerism.

“When you identify with a group, you tend to adopt its values and goals as your own," says De Roeck. "For example, if you are a fan who identifies with the New England Patriots, their objective to win the Super Bowl becomes your objective too. If they win it, you will say 'we,' rather than 'they,' won the Super Bowl, because being a fan of the New England Patriots became part of your own identity.”

That loyalty goes out the window, however, if employees don't perceive their immediate supervisor as ethical, defined as conduct that shows concern for how their decisions affect others' well-being. Results show that the propensity for the company’s environmental initiatives to foster employees’ green behaviors disappears if they think their boss has poor ethics. Employees’ engagement in volunteer efforts in support of their company’s community-based initiatives also declines if they believe their boss is not ethical, though not as dramatically.

“When morally loaded cues stemming from the organization and its leaders are inconsistent, employees become skeptical about the organization's ethical stance, integrity, and overall character," says De Roeck. "Consequently, employees refrain from identifying with their employers, and as a result, significantly diminish their engagement in creating social and environmental good.”

Findings of the study, based on surveys of 359 employees at 35 companies in the manufacturing industry (consumer goods, automobile, and textile), could provide insight for companies failing to reap the substantial societal benefits of CSR.

“This isn’t another story about how I can get my employees to work better to increase the bottom line, it’s more about how I can get employees to create social good,” says De Roeck, whose research focuses on the psychological mechanisms explaining employees’ reactions to, and engagement in, CSR. “Moreover, our measure of employees’ volunteer efforts consists of actions that extend well beyond the work environment, showing that organizations can be a strong engine for positive social change by fostering, through the mechanism of identification, a new and more sustainable way of life to their employees.”

De Roeck says organizations wanting to boost their social performance by encouraging employee engagement in socially responsible behaviors need to ensure that employees perceive their ethical stance and societal engagement as authentic. To do so, and avoid any perception of greenwashing – the promotion of green-based initiatives despite not practicing them fully – organizations should strive to ensure consistency between CSR engagement and leaders’ ethical stance by training supervisors about social and ethical responsibility. Organizations should also be cautious in hiring and promoting individuals to leadership positions who fit with the company CSR strategy and ethical culture.

"Organizations should not treat CSR as an add-on activity to their traditional business models, but rather as something that should be carefully planned and integrated into the company strategy, culture, and DNA,” says De Roeck. “Only then will employees positively perceive CSR as a strong identity cue that will trigger their identification with the organization and, as a result, foster their engagement in such activities through socially responsible behaviors.”