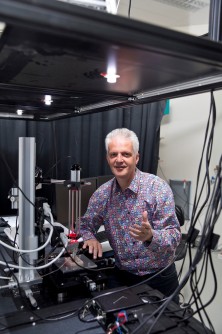 For 20 years, biologist have debated how a cell is able to package a big jumble of DNA into tiny chromosomes, while preparing for cell division. Prof Cees Dekker reports in Science (First Release 22 Feb) the answer is: ‘by pulling loops’.

“We’ve been able to film in real time how a single protein complex called condensing reels in DNA to extrude a loop. For over two decades, biologist have been divided between two theories: one theory stated that condensin works like a hook that can grasp and connect DNA within the jumble of DNA, thus tying it together. Another theory suggested that the ring-shaped condensin pulls the DNA inwards to create a loop. As we now have found out: the latter is true.”

“The research represents a significant step in the fundamental understanding of DNA in our cells, but it is also relevant for medical research. Problems with the protein family to which condensin belongs—the SMC proteins—are related to hereditary conditions such as Cornelia de Lange Syndrome. Condensin is also crucial in the organisation of the chromosomes during cell division, and errors in the process can result in cancer. A better understanding of these processes is vital for tracking down the molecular origins of serious illnesses.”

Prof. Cees Dekker studies the organisation of chromosomes in cells, but ultimately aims to build an artificial cell: “to fully understand how life works, we would like to be able to build a living cell from scratch. In parallel research, we make liposomes as vehicles on a chip that can be the carriers for synthetic cells, and we  address cell division where we study the Min proteins that localise the cell center and the FtsZ machinery that drives the cell division into two daughter cells. Step by step, we are getting closer to build a fully artificial form of life, and hence, understanding life as it is.