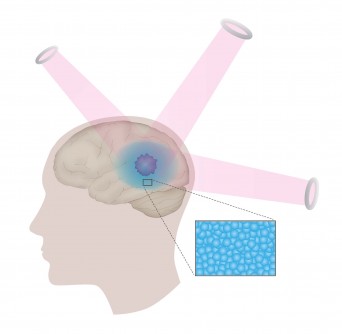 Drug-filled nanoparticles, represented inside the box, near the tumor site make the cancer cells more sensitive to radiation. (Illustration by Mark Saba)

Newswise — A collaboration between two laboratories – one in Engineering and the other in Medicine – has led to a promising drug delivery system that uses nanoparticles to fight a particularly aggressive and hard-to-treat brain cancer.

One obstacle that has thwarted conventional treatment of brain tumors is the blood-brain barrier, which protects the brain’s sensitive tissue from foreign elements. It also, however, blocks drugs that could otherwise be very effective for treating tumors. Researchers have managed to bypass this barrier with a method known as convection-enhanced delivery (CED), in which the drug is delivered directly to the tumor. However, most small molecules delivered directly to the brain are quickly cleared. This severely limits the drugs’ efficacy, since the invasive CED procedure typically can be performed only once because the associated morbidity and complex nature of the procedure.

A research team led by W. Mark Saltzman, the Goizueta Foundation Professor of Chemical and Biomedical Engineering, professor of cellular and molecular physiology, and member of Yale Cancer Center, and Ranjit Bindra, associate professor of therapeutic radiology and of pathology, has developed a delivery system that combines CED with nanoparticles to get drugs past the blood-brain barrier and remain longer around the tumor. The results are published in Molecular Cancer Therapeutics and is the subject of the cover of the journal’s August issue.

For the study, the researchers used VE822, a drug that inhibits a tumor’s ability to repair its DNA after it has been damaged by radiation therapy, via blockade of a key DNA repair protein, called ATR. Doses of the drug were administered to rats with glioblastoma , the most aggressive form of brain tumor. One group of rats received a treatment in which the drug was encapsulated in polymer-based nanoparticles designed to release its cargo over an extended period. The other group received the same drug without the nanoparticles.

The rats who received treatment with the drug-filled particles showed a significantly higher survival rate than the other group. The key difference is in how long the drug remained in the brain. When the drug was encapsulated in the nanoparticle, it was still present in the brain two weeks later, covering the period of radiation therapy. When delivered free of the nanoparticles, the drug almost completely vanished within 24 hours.

“For us, it’s a green light to say ‘OK, this concept is feasible,’” Bindra said. “That was a huge hurdle to overcome, to show that it can be done.”

The researchers are confident that they’ll see even better results as they make modifications to the treatment, which would include adding chemotherapy, trying more potent DNA repair inhibitors, and changing the materials they use to make the nanoparticles. One promising alteration, Saltzman said, is a particle that would release the drug more slowly and steadily than the one used in the study.

The researchers began the study about 18 months ago. Given the complexity of the research – making new materials, administering them to animal models and performing radiation therapy – Saltzman said he was surprised at how early in the process they saw successful results.

“It worked the first time and it has held up to repeated studies as well,” he said. “Some things you need to tweak them a lot to get them to work, but this this just works, and it has a robust effect.”

The researchers are now talking to a pharmaceutical company interested in encapsulating their DNA repair inhibitors in the particles described in this study, which could bring this delivery system to clinical trials as a potential brain cancer treatment for both adult and pediatric primary brain tumors quite soon in the future. And earlier this week, they received a $250,000 Innovation Grant from the pediatric cancer charity Alex’s Lemonade Stand Foundation to develop a nanoparticle-based system for delivering chemo/radio-sensitizers into spinal cord fluid. The two labs also have members working together on several grant proposals expected to go out over the next few years.

Bindra said the results they have achieved so far show how fruitful a collaboration between two distinct labs can be.

“Mark’s lab is so highly skilled in the fabrication of nanoparticle formulations, and you take our lab in which we’re experts in DNA repair and understanding how to target brain tumors and also how to bring new therapies into the clinic,” he said. “We’ve taken these two fields that are really disparate in nature but sort of synergize on their own, which I think is ultimately going to lead to better therapies for patients.”

Bindra said he knew of nanoparticles previously, but hadn’t given them too much of his lab’s attention – one of his concerns was how well the particles could be controlled once they were in the brain. “We hadn’t really understood their power until we met Mark,” he said. “His lab has really come out with new formulations that are pushing the envelope, and answering questions that were previously thought impossible to address.”

Once he understood that the polymer composition and size of the nanoparticles could vastly change how they deliver agents, Bindra said he realized how much flexibility and power the technology had and its potential for medicine.  “Conversely, we were able to tell him that there’s a whole world of molecules he can develop with his technology.”