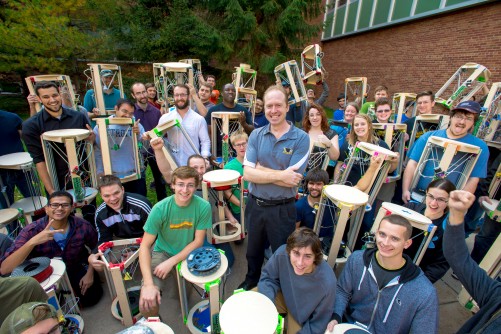 Joshua Pearce is an engineer at Michigan Tech who supports open access and uses his 3-D printing class to teach students new ways to gather knowledge.

The academic publishing industry is undergoing radical change. And one scientist from Michigan Technological University sees how to engineer a transition that benefits researchers, innovative publishers, the public and funding organizations. In light of the recent changes made in Europe, Joshua Pearce says the US system needs streamlining.

Pearce, who holds a dual appointment at Michigan Tech in electrical engineering and materials science, says the science community is turning to open access because of the high cost of journal subscriptions and drive to increase citations.

"First, it is intuitively obvious that the progress of science is best served if everyone has access to the academic literature. Second, it is clearly fair that if the public funds science, they should be able to read it," Pearce says, explaining that the economic and physical models of publishing are what keep the current process in place.

"The current model hurts all scientists as the literature is fractured behind pay walls; many institutions simply cannot afford the millions of dollars necessary to access all of the literature,” says Pearce.

Even scientists that have access to the best funded libraries often must wait for interlibrary loan or are cut off by purchasing price caps. Now with Europe's announcement, Pearce explains, scientists and all citizens will have free access to the literature – at least that which is funded by European governments. Pearce points out that this practice gives European scientists a significant competitive advantage over their colleagues who are forced to pay exorbitant rates to read the academic literature controlled primarily by for-profit companies.

“I expect to see an increase in scientific and technical innovation coming from Europe as the rules are put in place," he says. "Europeans can also expect an increase in citations as we can't cite what we can't read. Frankly, this is the future and anyone who does not participate in open science will be left behind.”

The solution for the US, Pearce says is to “work with government funding organizations to embrace open access information by using free access public repositories of government-funded research.” This transition is already underway; the NIH has already announced rules for free access for research they fund. In addition, scientists are already providing free access copies of their work themselves using legal means in repositories like Arxiv.org, academia.edu or publishing directly in open access journals.

Pearce is the editor-in-chief of HardwareX, an open access journal dedicated to open source scientific hardware and he is the author of the Open-Source Lab:How to Build Your Own Hardware and Reduce Research Costs. He runs the Michigan Tech Open Sustainability Technology Research Group (MOST Lab) where he focuses on using appropriate technology to find collaborative solutions for sustainability and poverty reduction. His pre-prints are available free of charge at academia.edu.