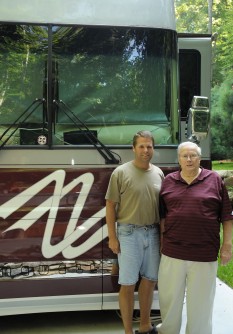 Newswise — While the cost of fuel has put a damper on the travel plans of many Americans, one father-son engineering duo with a passion for RV travel has decided to combat the problem by creating a concept for an electric-hybrid passenger vehicle with the ability to improve fuel economy and increase the acceleration of the motor home towing it.

In this concept, the dinghy consists of a hybrid SUV towed by the RV. When driven as a standard automobile, the SUV operates as a fully-functional hybrid vehicle. When towed behind a RV, the SUV switches into the hybrid dinghy pusher mode, where only the electrical portion of the hybrid-SUV is utilized. The HDP works by going into generator mode and storing energy when going downhill, and energy previously stored in the batteries is used to help push the motor home up-hill. The previously stored electrical energy in the HDP can also be used to help accelerate the motor home more quickly from a stop or while just driving down the road.

A conventional hybrid SUV is adapted to utilize its electric system to recycle energy when being towed. The HDP’s onboard motors provide propulsion during acceleration and act as electric generators during braking. The assistance provided to the motor home by the HDP is not meant to replace the propulsion provided by the motor home engine; it simply supplements it to improve acceleration and reduces wear on the RV engine. Unlike typical towed dinghies, motor homes towing an HDP experience a decrease in fuel consumption and an increase in acceleration performance.

According to Shepard, hybrid motor homes are just now coming onto the market and they are expensive. Besides being a cheaper alternative to a hybrid motor home, the greatest advantage of this new concept is that the HDP not only assists the motor home in transit, but it also provides the motor home owners with a hybrid vehicle to drive after arriving to their destination. Other advantages of implementing such a system are improved gas mileage, reduced rate of wear on brake components, and improved mobility for users of RVs and the dinghy.

Working with UA’s Office for Technology Transfer, the Shepards are currently in the process of securing a development partner to bring this cutting-edge technology to the market. The team has filed a U.S. provisional patent.

UA’s Office for Technology Transfer, established in 2006, works with innovators to facilitate the transfer of technologies created at the University to the commercial market place for public benefit.

In 1837, The University of Alabama became one of the first five universities in the nation to offer engineering classes. Today, UA’s fully accredited College of Engineering has more than 2,300 students and over 100 faculty. In the last seven years, students in the College have been named USA Today All-USA College Academic Team members, Goldwater scholars, Hollings scholars and Portz scholars.

The University of Alabama, a student-centered research university, is in the midst of a planned, steady enrollment growth with a goal of reaching 28,000 students by 2010. This growth, which is positively impacting the campus and the state's economy, is in keeping with UA's vision to be the university of choice for the best and brightest students. UA, the state's flagship university, is an academic community united in its commitment to enhancing the quality of life for all Alabamians.