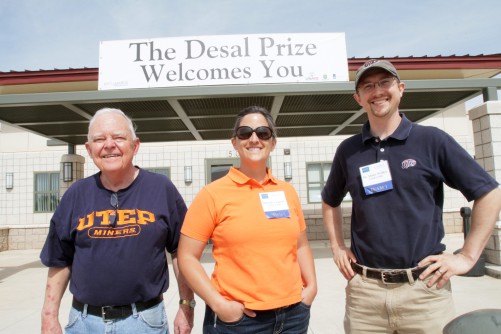 Newswise — The University of Texas at El Paso (UTEP) has placed second in the highly competitive and rigorous Desal Prize competition. More than 60 teams from 29 countries originally registered for the worldwide challenge.

"By 2050, global water demand is expected to increase by 55 percent, and 70 percent of global water use occurs in food production,” said Christian Holmes, global water coordinator at the U.S. Agency for International Development (USAID). “The Desal Prize was developed to supply catalytic funding to capture and support the innovative ideas and new technologies that could have a significant impact.”

Innovators were asked to create cost-effective, energy efficient and environmentally sustainable desalination technologies that could provide potable water for humans as well as water that could be used for crops in developing countries. The prototypes were tested and evaluated by a panel of expert judges earlier this month at the Bureau of Reclamation’s Brackish Groundwater National Desalination Research Facility in Alamogordo, New Mexico.

“I’m very proud of what we accomplished on the short time scale and with the budget we had available,” said Malynda Cappelle, who led the team and serves as the associate director of the Center for Inland Desalination Systems (CIDS) at UTEP. “I look forward to the next step, which will be piloting our system with farmers in a developing country hopefully somewhere in Latin America.”

With the second place designation, the UTEP team — which included Cappelle, CIDS Director Tom Davis, Ph.D, and Assistant Professor of Civil Engineering Shane Walker, Ph.D. — wins $60,000. The team competed against the Technion - Israel Institute of Technology and the University of North Texas, among others. A team from the Massachusetts Institute of Technology and Jain Irrigation Systems earned first place.

The UTEP group is now eligible to receive grant funds totaling $400,000 to implement their prototype in pilot projects with rural farmers in a USAID mission region.

For the competition, the team applied their patented Zero Discharge Desalination (ZDD) technology, which reduces water waste in the desalination of groundwater by conventional processes. ZDD employs reverse osmosis to produce high-quality product water and electrodialysis metathesis to remove undesirable ions from the water and improve desalination efficiency.

The challenge was hosted by USAID and the Bureau of Reclamation in partnership with the Swedish International Development Cooperation Agency and the Ministry of Foreign Affairs of the Kingdom of The Netherlands.

Cappelle said, “Being able to compare our ZDD system’s performance against the other competitors and to meet the teams and learn about their technologies was an invaluable experience.”