Call it a necessity.

Newswise — Engineering Hall, the new building that Rowan University, Glassboro, New Jersey, officially opened on Jan. 26, will enable the Henry M. Rowan College of Engineering to increase its enrollment to 2,000 undergraduate and graduate students by 2023; expand its programs; and grow its collaborations with business, industry and government offices.

The nationally recognized College has been in high demand since it opened in 1996, and that demand has only grown stronger recently. In the last five years, Rowan Engineering virtually doubled its enrollment to 1,488, still turning away good students who have to go elsewhere. In almost five years, it has increased its hallmark Engineering Clinics 52 percent to 134 during fall semester 2016, with multidisciplinary teams serving in many cases as the de facto R&D arm of local, national and international companies and agencies. Between FY2011 and FY2016, the College has increased its outside funding from $2.8 million to $8.9 million. And in the last few years, the College added a Ph.D. program and a Biomedical Engineering Department and opened the Center for Research and Education in Advanced Transportation Engineering Systems, among other initiatives. Revitalizing engineering education

During the grand opening and ribbon-cutting ceremony, Virginia Rowan Smith, a member of the Rowan University Board of Trustees and daughter of the late Henry Rowan, referenced her father’s charge, “What this country needs is not more engineers, but more great engineers.”

Smith’s father and mother, Betty Rowan, made the start of the College possible with a $100 million gift to then-Glassboro State College in 1992, a gift that came with the request to start an engineering school that revitalized engineering education. The University did just that.

The College’s hallmark Engineering Clinics, for instance, were innovative from the start. While engineering colleges historically started students on hands-on work in their junior year, Rowan Engineering did so during the first semester of freshman year, creating multi-disciplinary teams that mimicked the professional world. During the College’s two decades, faculty and students have garnered numerous honors and held positions in national and international organizations. U.S. News & World Report, among other entities, has honored the College; in its latest rankings, the publication placed the College 22nd among more than 200 master’s-level programs.

“Educating the students here to be great engineers is just what we are doing,” Smith said, noting the new facility enables the College to build on its strong history and further its status as an international leader in engineering education. “(My father) wanted our program to be exceptional, and it truly is.”

“My father . . . would have been so pleased to see this building today,” she said.

Contributing to the region

Rowan University president Dr. Ali Houshmand spoke of the College’s part in Rowan’s role as a state research institution focused on practical research that leads to products, jobs and businesses in the region.

Noting that collaborations among engineering, science and business disciplines can find a home in Engineering Hall, the president said, “This building opens the gate for us to define who we are as a research institution.”

The State of New Jersey funded $46 million of the $70.6 million, 88,000-square-foot structure through the 2012 New Jersey Building Our Future Bond Act. The State awarded Rowan with the second-highest amount of funding -- $117 million -- through that bond act, which was the first to support construction at New Jersey higher education institutions in two decades.

A packed house turned out for the grand opening, including State and local officials, board members, administrators, professors and staff, students, alumni, partners and friends. The event came just eight days after the University held a similar ceremony for the William G. Rohrer College of Business’ new home on Rt. 322, a $63.2 million, 98,300-square-foot facility that is the first academic building dedicated solely to business education.

Dr. Anthony Lowman, the dean of the College, started the speeches, giving a nod to Mr. Rowan, legislators, the audience and professors, among others.

“This is just amazing to have this turnout,” he said. “It really speaks to . . . the amazing job we’ve done.”

Lowman said that the College now has as many students as it does graduates, and he assured the legislators present that if they wanted to provide for a third Engineering building he was confident Rowan could jump enrollment to 4,000 students.

State Senate President Stephen Sweeney gave a nod to the University and the College, acknowledging that Rowan Engineering is educating students that large corporations such as Lockheed Martin need.

“Rowan University is on the map, and it’s so exciting for the economy of the region,” Sweeney said. “We can provide (businesses) with the people they need to help them grow.”

With the College’s original Rowan Hall, to which it is joined by a third-floor pedestrian bridge, Engineering Hall is a gateway to the University’s campus off Bowe Boulevard in Glassboro.

State of the art

The facility includes four classrooms, 19 research and teaching labs and 14 collaboration rooms. Among the highlights of the building are first-floor project labs that open to the outdoors, making extended space available for work on a variety of projects, including automotive engineering, solar arrays and drone technologies; a sustainability wing, where students can focus on such fields as alternative energy; designated lab space for specific departments; designated space for Freshman and Sophomore Engineering Clinics; biomedical engineering labs; space for STEM (science, technology, engineering and mathematics) outreach initiatives; and water and hydrology, cell culture, and wireless communication labs. All Rowan engineering students have access to Engineering Hall, home to the Experiential Engineering Education Department (ExEEd), which oversees the Freshman and Sophomore Clinics for all majors. Engineering Hall also houses the Biomedical and the Electrical & Computer Engineering departments, with additional lab space for Civil & Environmental Engineering and Mechanical Engineering. The building includes a two-story dining/study/gathering space as well as outdoor space for students to study and meet.

Noted Culleny before the ceremony, "This is a true testament to how strong the program is because when I was a freshman this was just a gravel lot, and to be able to watch it become all of this is just awesome . . . These new classrooms positively affect our learning environment. The building is really student focused, with white boards in the hallway so you can just stop and work through a problem right there. Everything is team based, and this increased space gives us the ability to work more effectively as a team."

“Vector Space” by Carolyn Braaksma and Brad Kaspari, is a terrazzo installation in the first floor lobby that contains tributes to Mr. Rowan among its elements, which include Faraday’s Law of induction, the equation for magnetism and the Ohm’s Law wheel accompanied by illustrations of various engineering concepts and equations.

“Opticks” by artist Beth Nybeck is a freestanding 23’ by 14’ by 16’ sculpture on the grounds of the new Engineering Hall. Named for the book Opticks, a 1704 treatise on the effects of light by Isaac Newton, the stainless steel and aluminum figure represents a human head, a design intended to reflect the ever-changing quest for, and acquisition of, knowledge, and includes notes from students’ work laser cut into its panels.

About the Henry M. Rowan College of Engineering

The College offers bachelor’s through doctoral programs, with bachelor’s and/or graduate degrees in Biomedical, Chemical, Civil & Environmental, Electrical & Computer and Mechanical Engineering, and Engineering Management. In its 2017 rankings, U.S. News & World Report placed the College 22nd out of more than 200 schools nationwide where the highest degree offered is a bachelor’s or master’s degree.

South Jersey industrialist and philanthropist Henry Rowan and his wife Betty made the creation of the College possible when they donated $100 million to then-Glassboro State College in 1992 with the directive to revitalize engineering education. The College opened its doors to 100 students in 1996 and graduated its first class in 2000. With a focus on minds-on, hands-on learning, the College counts among its hallmarks its eight semesters of Engineering Clinics.

Rowan will retrofit the original College of Engineering building, Rowan Hall, in the near future. 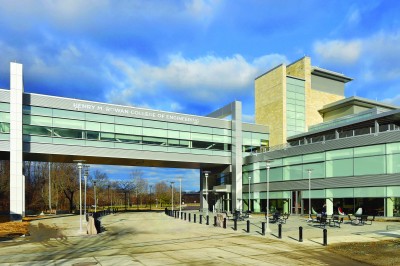 Caption: Outside view of the new Engineering Hall at the Henry M. Rowan College of Engineering. 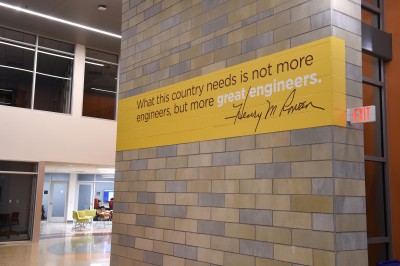