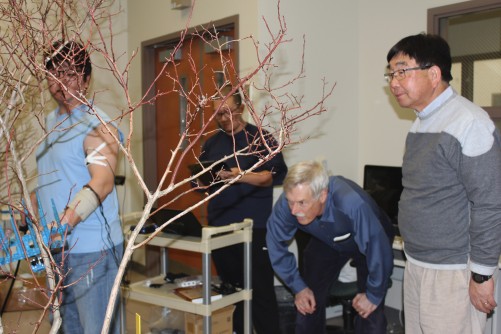 Graduate student Eunsik Kim uses one of the shakers on the blueberry bush while fellow graduate student Kiseok Sung records the force the shaker has on Kim’s muscles as Andris Frievalds and Fumioni Takeda observe the test.

U.S. blueberry production has increased more than four-fold in the past three decades with a total production of more than 500 million pounds and a farm gate value of $860 million in 2011, making it the largest blueberry-producing country, accounting for almost two-thirds of the world’s production. Blueberries are grown in 39 states, with Michigan, New Jersey, Oregon, Georgia and North Carolina as the top five producing states.

“The overall goal of this proposal is to develop a multidisciplinary approach to advance harvest efficiency and improve postharvest handling of fresh-market highbush blueberries by developing a scale-neutral harvest-aid system and advanced sensor technologies,” said Li, the principal investigator (PI) of the project.

The blueberry industry has been an important source of economic growth in rural communities, especially for small and medium-sized farms, explained Fumioni Takeda, research horticulturist with the USDA Agricultural Research Service, who is a co-PI on the project.

“These farms provide an economic lifeline for the surrounding rural communities, many of which have high poverty rates due to lack of employment opportunities,” he said. “Therefore, maintaining the sustainability and profitability of the blueberry industry, especially providing affordable and effective engineering tools for small and medium-sized farms, is critical to the rural economy in the United States.”

Li, who received his Ph.D. from the Agricultural and Biological Engineering program at Penn State in 2006, reached out to Andris Freivalds, professor of industrial engineering, who specializes in human factors and ergonomics. He had heard about some of Freivalds’ previous research into the effects some agricultural processes have on the human body and asked Freivalds to be a co-PI on the blueberry harvesting project.

“Though I did not work with Dr. Freivalds directly during my time at Penn State, I approached him because he is an internationally renowned expert in ergonomics and came highly recommended by a colleague in the Penn State Department of Agricultural and Bioengineering,” said Li.

Freivalds is studying the physical impact electronic shaking devices has on workers in blueberry fields while taking into consideration vibration and pressure components. His doctoral students Eunsik Kim and Kiseok Sung are assisting in the research.

“Traditionally, shaking devices have caused too much damage to blueberries for them to be packaged and sold for human consumption; only hand-picked berries are of the quality expected by consumers when they are packaged and sold,” said Freivalds. “So we are looking at using several electronic shakers typically used in olive harvesting operations to determine if one or more of them can be used to harvest berries that are of good enough quality to be packaged and sold, or at the very least, that can be used to make blueberry preserves, jams and other consumable blueberry products in the United States.”

Freivalds and his graduate students began their research with a blueberry harvesting simulation. In order to examine the effects the shakers had on the operator’s body, Kim was hooked up to an electromyogram (EMG) to measure the stress on his muscles while operating the devices. He then mimicked the harvesting of blueberries on a blueberry bush that was set up in a lab environment.

“After only using the shakers for an hour, we were able to pinpoint some areas of interest for our research,” said Kim. “I was quite fatigued after holding the shaker and couldn’t imagine having to hold one of these machines for six-to-eight hours every day.”

The EMG showed some stress to Kim’s back and shoulders but nothing alarming. His forearm was the area that showed the most stress. Before beginning the simulation, Freivalds was aware the weight of the shakers could cause stress on the operator’s arm. However, he was surprised by another factor that made the experience particularly uncomfortable for Kim, which is the vibration of the machines.

With this recent simulation in mind, the next step will be for Freivalds to take his research on the road. After the spring semester, he and his students will visit blueberry farms along the east coast to have blueberry harvesters test the shakers in the field. Like Kim, the stress on their muscles will be measured using an EMG. However, Freivalds and his team will also use an accelerometer to measure the vibrations from the shakers.

“Working with harvesters in the field will allow us to account for situations that we cannot simulate in the lab,” said Freivalds. “The workers will be using a live blueberry bush, much different from the dead one in our lab, with blueberries on it. The shakers will have the netting mechanism on them to catch the berries and we will be in natural working conditions. This will allow us to see the effects the shakers have on harvesters’ posture, arms, etc.”

After Freivalds completes his observations he will report back to the rest of the researchers on the project and recommend the best shaker, from an ergonomics and human factors perspective. His findings will be referenced, along with other researchers’ work, in the designing of a new shaker.

“I have greatly enjoyed working with Dr. Freivalds and his team on this project,” said Li. “He brings years of expertise to the table and his research is a valuable perspective for the project. It is important to have someone who is focused on the effects these machines have on the user. Without such research, a shaker that works perfect in theory could be useless in the field...Dr. Freivalds’ research thus far has been very interesting and I expect to see more exciting results from him in the future.”