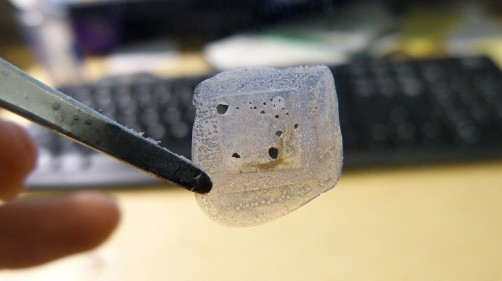 A polycarbonate shell 125 microns thick after a vaporization test of its embedded rubidium and sodium biflouride. The chemicals are capable of vaporizing thinned silicon-dioxide microchips packaged in the shell.

Newswise — ITHACA, N.Y. – Engineers from Cornell University and Honeywell Aerospace have demonstrated a new method for remotely vaporizing electronics into thin air, giving devices the ability to vanish – along with their valuable data – if they were to get into the wrong hands.

This unique ability to self-destruct is at the heart of an emerging technology known as transient electronics, in which key portions of a circuit, or the whole circuit itself, can discreetly disintegrate or dissolve. And because no harmful byproducts are released upon vaporization, engineers envision biomedical and environmental applications along with data protection.

There are a number of existing techniques for triggering the vaporization, each with inherent drawbacks. Some transient electronics use soluble conductors that dissolve when contacted by water, requiring the presence of moisture. Others disintegrate when they reach a specific temperature, requiring a heating element and power source to be attached.

Cornell engineers have created a transient architecture that evades these drawbacks by using a silicon-dioxide microchip attached to a polycarbonate shell. Hidden within the shell are microscopic cavities filled with rubidium and sodium biflouride – chemicals that can thermally react and decompose the microchip.

Ved Gund, led the research as a graduate student in the Cornell SonicMEMS Lab, and said the thermal reaction can be triggered remotely by using radio waves to open graphene-on-nitride valves that keep the chemicals sealed in the cavities.

“The encapsulated rubidium then oxidizes vigorously, releasing heat to vaporize the polycarbonate shell and decompose the sodium bifluoride. The latter controllably releases hydrofluoric acid to etch away the electronics,” said Gund.

Gund added that the technology could be integrated into wireless sensor nodes for use in environmental monitoring.

“For example, vaporizable sensors can be deployed with the internet of things platform for monitoring crops or collecting data on nutrients and moisture, and then made to vanish once they accomplish these tasks,” said Gund.

Lal, Gund and Honeywell Aerospace were recently issued a patent for the technology, and the SonicMEMS Lab is continuing to research new ways the architecture can be applied toward transient electronics as well as other uses.

“Our team has also demonstrated the use of the technology as a scalable micro-power momentum and electricity source, which can deliver high peak powers for robotic actuation,” said Lal.

Fabrication of the polycarbonate shell was completed by Christopher Ober, professor of materials science and engineering, with other components of the architecture provided by Honeywell Aerospace. Portions of the research were funded under the Defense Advanced Research Projects Agency’s Vanishing Programmable Resources program.