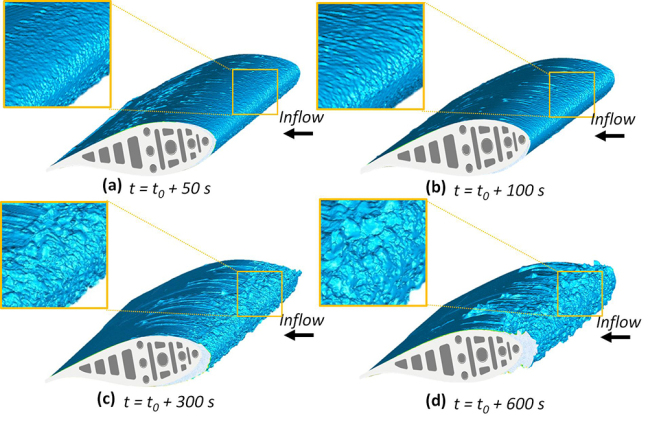 This image from experiments in Iowa State's Icing Research Tunnel show the evolution of icing on a model wind turbine blade, with glaze ice growing rougher and rougher at 50, 100, 300 and 600 seconds. 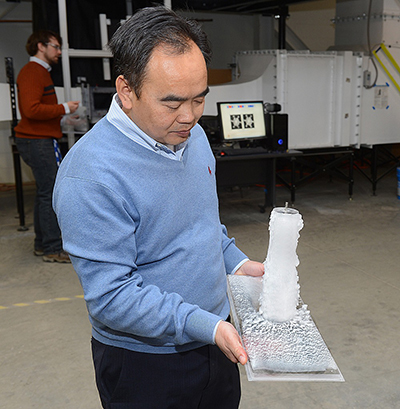 AMES, Iowa – In Hui Hu’s Iowa State University office, you can feel exactly what ice does to an airfoil.

As he recently rolled through the slides describing his research using Iowa State University’s icing wind tunnel, Hu picked up 3D printouts of icy airplane wings, wind turbine blades and power cables. Where there were supposed to be smooth leading edges and curved and cambered surfaces engineered to create lift or spin with the wind, there were warts of bumpy and coarse ice building up just off the leading edges and trailing over the tops and bottoms of the airfoils.

In his latest project, Hu will take an even closer look at ice formation on wind turbine blades – and how to prevent or delay ice from forming. That study could make a difference on Iowans’ utility bills.

It’s just the kind of project Hu had in mind when he started the Aircraft Icing Physics and Anti-/De-icing Technology Laboratory at Iowa State seven years ago.

The centerpiece of the lab is Iowa State’s Icing Research Tunnel. The wind tunnel can produce temperatures down to -13 Fahrenheit and airflow speeds up to 100 meters per second. The airflow carries water droplets from 10 to 100 millionths of a meter in diameter. A recent upgrade will allow researchers to produce ice crystals to study how they, for example, could create icing problems as they impact hot turbine blades in jet engines.

A high-speed digital image projection system and infrared-thermal imaging cameras capture every detail of ice formation on airfoils – where it forms, how it flows, how it affects the leading edge, how it decreases lift and increases drag. The icing wind tunnel also helps Hu’s group test water-repelling coatings that could mitigate ice formation – some of the coatings are based on the spiky surface structure of lotus leaves and others on the wet, oily surface of pitcher plants.

Lab conditions, of course, do not always reflect conditions in the field. And so, when Hu couldn’t get permission to measure ice on Iowa wind turbines, he used connections in his native China that allowed a student to take drone footage of icy turbines along a mountain ridge.

“Iowa winters are supposed to be the best season for wind energy harvesting due to the abundant wind resources and increased air density with decreasing temperature,” Hu and his research group wrote in a description of their project. “However, ice accretion on turbine blades was found to decrease a turbine’s power production significantly (i.e. up to 50% reduction at critical icing sites).”

Current technology takes some of the power produced by turbines to heat the massive surface of turbine blades. But that consumes a lot of energy.

Hu’s group will study a hybrid anti-/de-icing strategy: Minimized heating only at small, critical parts of the blades such as leading edges and applying durable, ice-phobic coatings along the rest of the blades.

Caption: This image from experiments in Iowa State's Icing Research Tunnel show the evolution of icing on a model wind turbine blade, with glaze ice growing rougher and rougher at 50, 100, 300 and 600 seconds.