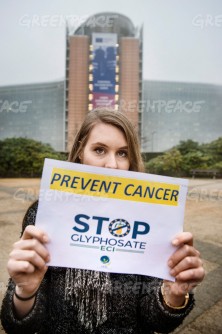 Newswise — Brussels, 8 February 2017 – Campaigners and activists met in Brussels and other European cities (Madrid, Rome, Berlin and Paris) today to launch a European Citizens’ Initiative (ECI) to ban glyphosate, reform the EU pesticide approval process, and set mandatory targets to reduce pesticide use in the EU. The goal is to collect at least one million signatures from Europeans and submit the petition before the Commission’s next move to renew, withdraw or extend the EU licence of glyphosate.

Glyphosate – the most widely used weedkiller in Europe – is also known as Roundup, a Monsanto brandname. In 2015, the World Health Organization (WHO) linked glyphosate to cancer. The European Chemicals Agency (ECHA) is currently working on a safety assessment.

Génon K. Jensen, Executive Director at the Health and Environment Alliance (HEAL) said: “Thousands of tonnes of glyphosate are sprayed each year on our fields, in our countryside and our neighbourhoods. It is defined as a ‘probable carcinogen’ by IARC, the international agency recognised as the gold standard in carcinogen identification. We should not be using any weedkiller linked to cancer. If we are serious about protecting people’s health, and giving our wildlife a chance to recover, then our governments must step in to ban the most toxic pesticides, and reduce the overall amount that is used.”

Franziska Achterberg, Greenpeace EU food policy director said: “We are told that pesticides are strictly regulated to prevent harm. Yet they continue to be approved in secret meetings, based on unpublished industry studies. This kind of secrecy panders to industry and prevents proper scrutiny of EU food safety decisions. Regulators – not industry – should be responsible for ensuring public safety based on published scientific evidence.”

Oliver Moldenhauer, Executive Director at WeMove.EU said: "This year we have a real opportunity to finally get glyphosate out of our fields and off our plates. Our politicians need to hear this message loud and clear: they must protect citizens and the environment by banning this dangerous weedkiller and put us on the path towards a pesticide-free future."

The ECI is backed by a broad, pan-European coalition of 38 organisations from 15 countries, including Corporate Europe Observatory (CEO), Greenpeace, the Health and Environment Alliance (HEAL), Pesticide Action Network Europe (PAN-E), and WeMove.EU.

More information is available on www.stopglyphosate.org

Glyphosate is one Europe’s most widely used pesticides, and its negative impacts on people’s health and the environment are clearly documented. EU Regulation 1107/2009 prohibits the use of pesticides when there is sufficient evidence in laboratory animals that these substances can cause cancer, based on scientific criteria from the WHO’s International Agency for Research on Cancer (IARC). In 2015, IARC classified glyphosate as “probably carcinogenic to humans.” Therefore, the EU approval for glyphosate must be withdrawn.

Under the rules of the European Citizens’ Initiative (ECI) a petition must be signed by at least one million EU citizens within one year, with minimum thresholds reached in at least seven EU countries. To take part in an ECI, signatories must enter their address details, date and place of birth, and their ID number in some countries.

For more information on the #StopGlyphosate objectives, please visit www.stopglyphosate.org

Diana G. Smith – Health and Environment Alliance (HEAL) communications and media advisor, +33 (0)6 33 04 29 43, [email protected]Corporate Europe Observatory (CEO) is an independent research and campaign group working to expose and challenge the heavy influence of corporate interests on EU policies.Greenpeace is an independent global campaigning organisation that acts to change attitudes and behaviour, to protect and conserve the environment and to promote peace. Greenpeace does not accept donations from governments, the EU, businesses or political parties. www.greenpeace.eu For breaking news and comment on EU affairs: www.twitter.com/GreenpeaceEUThe Health and Environment Alliance (HEAL) is a leading European not-for-profit organisation addressing how the environment affects health in the European Union (EU). We demonstrate how policy changes can help protect health and enhance people’s quality of life. www.env-health.org Follow us on Twitter: www.twitter.com/HealthandEnvPesticide Action Network Europe (PAN-E) is the European regional centre of a global network of more than 600 non-governmental organisations working together to eliminate the use of harmful pesticides in food production and public green areas. Based in Brussels, PAN E is following closely the regulatory developments in relation to pesticides used in Europe with the vision to replace all hazardous pesticides with ecological alternatives. www.pan-europe.infoWeMove.EU is a citizens’ movement, campaigning for a better Europe; for a European Union committed to social and economic justice, environmental sustainability and citizen-led democracy. We are people from all walks of life, who call Europe our home – whether we were born in Europe or elsewhere. www.wemove.euOriginally posted on 8 February 2017