Environmental protection could benefit from 'micro' as well as 'macro' thinking 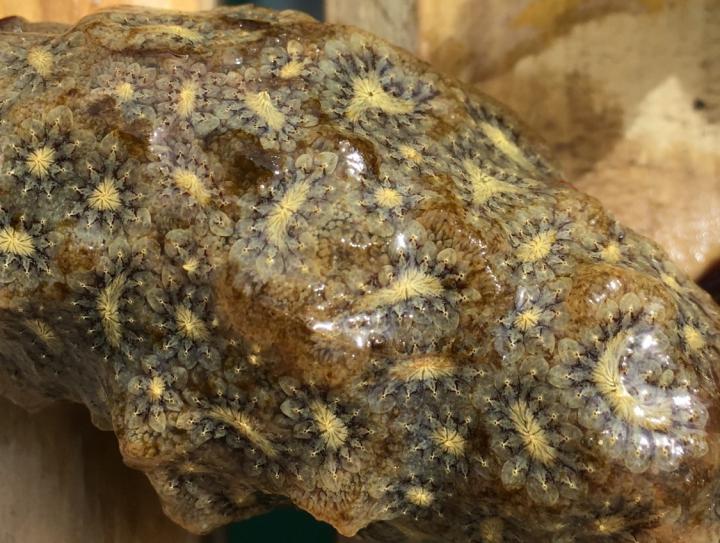 A close-up of a star tunicate (Botryllus schlosseri): a filter feeding species found in marinas and harbours across South Africa.

Newswise — Scientists at the University of Southampton have conducted a study that highlights the importance of studying a full range of organisms when measuring the impact of environmental change - from tiny bacteria, to mighty whales.

Researchers at the University's School of Ocean and Earth Science, working with colleagues at the universities of Bangor, Sydney and Johannesburg and the UK's National Oceanography Centre, undertook a survey of marine animals, protists (single cellular organisms) and bacteria along the coastline of South Africa.

Lead researcher and postgraduate student at the University of Southampton, Luke Holman explains: "Typically, biodiversity and biogeography studies focus on one group of species at a time, often animals. Studying animals, protist and bacteria together - organisms vastly different in size, separated by billions of years of evolution - gave us the opportunity to take a broader view of the marine ecosystem. We discovered remarkably consistent biogeographic groupings for the three across the coastline - consistent with previously studied patterns, driven by regional currents."

Findings are published in the journal Nature Ecology and Evolution.

The team took seawater samples in numerous locations along the length of the South African coast, from the warmer seas of the east, to the cooler waters of the west and the intermediate temperatures in the south. The samples were filtered, had environmental DNA extracted and underwent sophisticated lab analysis to indicate the diverse range of organisms found in particular locations.

Results showed a broad range of animals living in the sea along the whole length of coast, but with differences in the exact species in warm, cold and intermediate regions. This same pattern of difference was also shown in bacteria and protists - demonstrating consistency in the biodiversity of life for each region.

Furthermore, the scientists found that among the variables examined temperature had the greatest impact on determining the diversity of animals and bacteria, whereas protists were associated more with chlorophyll concentration in the water. The team also revealed that while all three groups were affected to some extent by human activity, such as shipping, fishing and building of marinas, this wasn't to the extent they'd expected.

Commenting on the study, Luke said: "We hope our work encourages researchers to consider other groups of organisms, both in biogeographic assessments and marine protection and restoration projects. For example, a project aiming to restore a coral reef might also need to consider the bacterial communities, or the protection of a river system might also ensure the protists communities are monitored in addition to the fish."

Moving forwards the team hope to learn more about the causes and consequences of global marine biodiversity change for all life, from microscopic bacteria and protists to macroscopic organisms like fish and marine mammals.